St. John’s Advances to Round of 16 With Win Over Penn

The Red Storm will face off against Duquesne Thursday night. 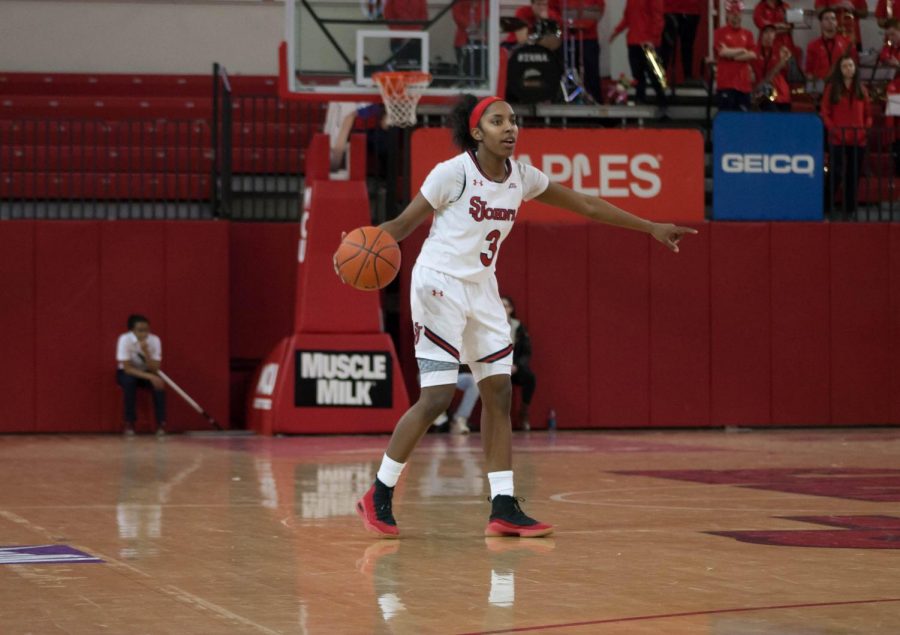 With the score favoring St. John’s by three points with eight seconds remaining in regulation, Lauren Whitlatch rose into the air with the ball in her hand. A minute earlier, she hit a long shot after a steal to cut a six-point deficit in half. After scoring 12 of Penn’s first 24 points, the crowd held its breath as the senior from Indiana released the game’s biggest shot, one that would tie the game and give the Quakers a chance to possibly advance in the postseason.

Instead of the bottom of the net, the ball fell into the hands of Tiana England, who raced up the court and evaded defenders as the clock expired in the Red Storm’s 53-48 win at Carnesecca Arena Monday night.

“I thought we did a terrific job at really staying poised at times even though we could have lost our composure,” Head Coach Joe Tartamella said after the game. “In a big moment, it’s a big win.”

In a game in which both teams failed to shoot above 40 percent from the field, the Red Storm found ways to overcome their struggles. Led by 12 points from Big East Freshman of the Year Qadashah Hoppie, the team was able to come out on top despite a game Tartamella called “ugly.”

St. John’s jumped out to a 14-8 lead at the end of the first period, an advantage that quickly disappeared over the next ten minutes. Whitlatch and the low post combination of Eleah Parker and Michelle Nwokedi forced turnovers and used their length to disrupt the Red Storm, a reason for their eight points and five turnovers in the quarter.

“We weren’t scoring well,” Tartamella said of his team’s performance. “Their length bothered us a bit, but I thought we adjusted enough.”

Akina Wellere, who scored seven of her 10 points in the second half, credited conference play as a way the Red Storm viewed Penn.

“Like any other team in the Big East, they’re going to have a post that’s a lot bigger than the post that we have or they’re going to be bigger than our guards,” she said. “It’s about always using our speed. We had to utilize it by getting around them and looking for the other post players to step up and drop off other guards who were open.”

In the second half, Tartamella elected to use a full-court press. The result were positive, as it forced many of Penn’s 17 turnovers.

While it did not stop the Quakers from scoring, it did limit them. Parker finished with 15 points and 11 rebounds, but Whitlatch was held to just 3 points on 1-4 shooting in the final 20 minutes of action. The Red Storm also raked up four more steals after halftime and eight for the game.

Thursday’s bout with Duquesne will be just the third all time between the two schools. The last meeting was at Carnesecca Arena on Nov. 16, 2016. The Dukes won that game 71-65, as well as the previous year’s match up at home in Pittsburgh.

But for Tartamella, now in his sixth season at St. John’s, a win at this point in the year represents an opportunity for growth and experience.

“Any time in the postseason for these players in that locker room to get more opportunities in situations like this where they have to make plays and be ready for postseason to be able to survive and move on to the next round, it’s important.”