Yakwe Leaves St. John’s. Are Ponds and Owens Next?

One Red Storm player has already left. Two others may drastically change the direction of the program. 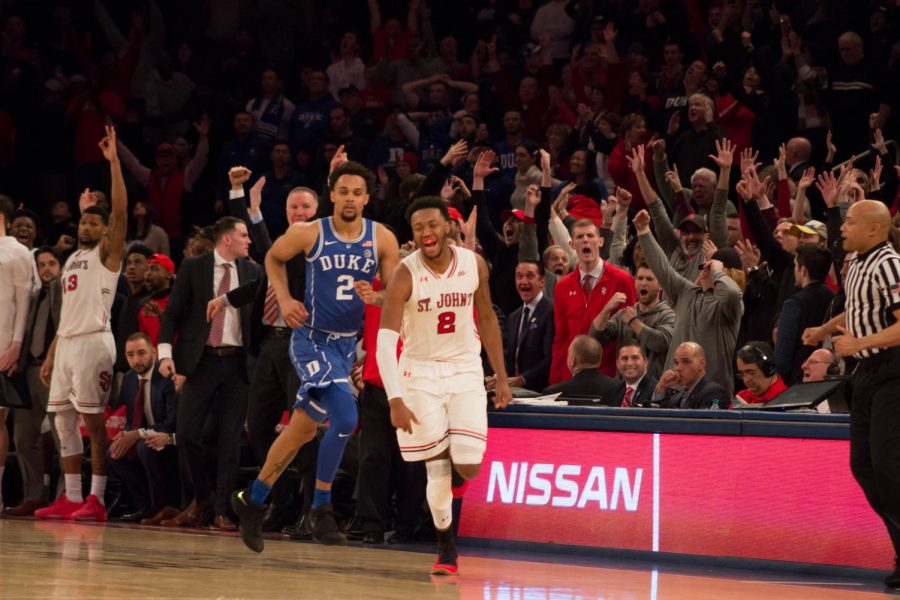 With college basketball having officially concluded Monday night with a 79-62 Villanova win over Michigan in the championship game, the a new season has begun, one headlined by uncertainty and questions surrounding the champion’s Big East rival.

Coming off a 16-17 record and another campaign without postseason basketball, St. John’s finds itself in a familiar situation.

The state of Red Storm basketball stands as one that lingers with excitement, but also one that will be hard to predict until key pieces make decisions that will potentially change the nature of the program.

On March 24, sophomore guard Shamorie Ponds declared for the 2018 NBA Draft, but did not hire an agent. The last part is crucial in evaluating Ponds’ options for the future.

In 2016, the NBA and NCAA implemented a new rule that would give players more freedom when deciding whether or not they wanted to return to school.

Previously, the only option players had if they declared for the Draft was to not return to college. Now, if a player declares but does not hire an agent, he can work out in front of NBA scouts, get advice and decide on his own if he wants to pursue a career or return to school.

If he hires an agent, there is no turning back.

The NCAA will not allow for its players to have agents while simultaneously participating in athletic competition. The possibility of distractions would be too high.

Ponds, who was selected to the Big East All-First Team and averaged over 21 points per game, alluded to the possibility of returning next season.

“My plan is to get as much NBA experience and knowledge as possible,” Ponds wrote on his Instagram page when he made the announcement. “In addition, I do not want to close any doors. I’ll like to keep all my options open. Also, to get some proper evaluations on my game would be helpful to me.”

According to Zach Braziller of the New York Post, Shawn Ponds noted that his son will still be enrolled in classes and will continue to work out at St. John’s. He went on to say that while declaring for the Draft made sense–something that was supported and backed by Head Coach Chris Mullin–signs point to the star guard returning for at least another season.

Another player who was a key contributor to the Red Storm this season was center Tariq Owens, who requested a release from the program in late march.

The 6’11” Maryland native will be a fifth-year senior and will graduate from St. John’s this May.

He transferred from Tennessee after his freshman season and sat out for a year due to NCAA regulations. If Owens were to transfer again or return to St. John’s, he would be immediately eligible as a graduate student.

Per Evan Daniels of 247Sports, Owens list of potential targets included Maryland, Oklahoma State, Ohio State, Ole Miss, and VCU. In recent days, there has been talk that there is mutual interest between Maryland and Owens, especially since it’s close to his hometown of Odenton.

“Today we asked for Tariq Owens’ release to explore is options to be a graduate transfer,” Owens’ father Renard tweeted. “This is not a personal decision. This is a business decision on what’s best for Tariq at this time. I have nothing but love and respect for the St. John’s staff and basketball program.”

Many around the program believe Ponds will return, while others believe Owens has played his last game in a St. John’s uniform. It was expected that he would move to the forward position to allow South Carolina transfer Sedee Keita to start at center. Marvin Clark II would move to small forward while Justin Simon would occupy the backcourt alongside Ponds.

On Thursday, the school announced that junior forward Kassoum Yakwe would not return to the program for the 2018-2019 season. Yakwe’s best season was his first, where he earned Big East All-Freshman Team honors after averaging 7.1 points, 5.3 rebounds and 2.5 blocks per game.

This season, he saw the floor in just 12 conference games during a year in which his role had significantly reduced.

“St. John’s University is a great place that I have had the privilege to call home for the past three years,” Yakwe said in a press release from the school. “I would like to thank our coaching staff and administration for all of their support and for affording me opportunities to experience personal growth on and off the court. This wasn’t an easy decision, but at this time I feel it is best for me.”

In the statement, Mullin also wished Yakwe the best moving forward and thanked him for his contributions over the last three years.

“Kassoum will always be part of the St. John’s basketball family and we wish him much success in his future,” Mullin said. “We appreciate all of the contributions he made to our basketball program. Kassoum is a wonderful young man with an endearing personality and has a bright future ahead.”

Yakwe leaves Queens with the seventh-most blocks in program history, sitting at 149.

Mullin will now inherit a talented group of recruits for the upcoming year. Three-star Louisiana guard Greg Williams committed St. John’s back in November. Forward Josh Roberts, a 6-foot-8 forward from powerhouse Montverde Academy in Florida, will add length and athleticism to an already dynamic roster. In early March, the Red Storm landed a commitment from Marcus Earlington, a 6-foot-5 forward from Don Bosco High School in New Jersey.

Earlington, who also played football, is listed at 250 pounds and had football offers from schools that included Rutgers, Purdue, Louisville and Michigan State. Despite lacking height for a low-post player, Earlington makes up for it with his tenacity on the glass.

For Mullin, many of the pieces he has recruited will hopefully add another element to a team that has struggled to put together a complete roster. Whether Owens returns or not, Keita and Clark provide a physical presence down low.

Quinnipiac transfer Mikey Dixon will assume a role as a backup guard behind Ponds.

Dixon won the Metro Atlantic Athletic Conference Player of the Year before he transferred and will give the bench an instant spark with his scoring and ability to conduct the offense.

But the season is seven months away. Much could happen between those months, with the possibility of more recruits joining Mullin’s team in an effort to make the postseason for the first time of his head coaching tenure.

For now, waiting is the only game to be played, the same one that reintroduces itself yearly for the Red Storm. Uncertainty will present itself at every turn.

Hope is the only thing that won’t leave fans in Queens in their quest for success.