The California native is finding her rhythm on the east coast 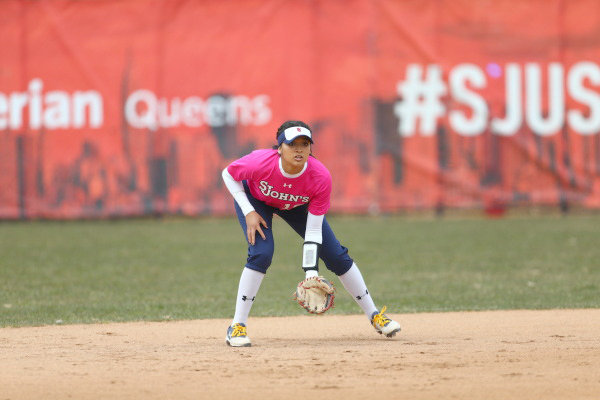 Laura Delgado has quickly emerged into one of the Red Storm's most productive players in conference play.

The average April high in Hesperia, California is a comfortable 75 degrees. Meanwhile, Queens finds itself a full season behind, with sweltering spring averages some 30 degrees lower. For any soul crazy enough to make the move to our dreary New York skies, a sense of culture shock may accompany.

Whether it be in San Bernardino County, Queens County or in the Municipality of Anchorage, Alaska, one thing’s for certain. Delgado will find a way to hit.

The shortstop is fresh off her first career Big East Player of the Week Award after a standout performance against Villanova on April 6. The sophomore hit .556 and slugged a pair of homers over the three-game series, the first two of her collegiate career. A grand slam in the series finale was the cherry-on-top of a breakout weekend.

“That whole weekend I just felt really comfortable going up to the plate,” Delgado said. “I was being really aggressive on first pitch strikes.”

It’s selective aggression that has propelled Delgado to the next level. She’s hitting at a phenomenal .400 clip in Big East contests. But in drawing three walks for an on-base percentage of .478, she’s also shown a keen knowledge of the strike zone, whether she consciously realizes it or not.

“When I’m feeling good, I’m honestly not thinking at all,” she explained. “The more I think, the worse I do. I’m just thinking ‘first strike I get, swing at it.’”

A natural hit tool at a premium position like shortstop is a highly-valued commodity. Delgado’s bat seems to be heating up at just the right time for a St. John’s team that currently sits one game behind DePaul, the conference leaders.

The Californian wasn’t handed her opportunity in Queens. After seeing action in just 10 games and picking up only six at-bats in her freshman year, there was a lot to be desired for both Delgado and Coach Amy Kvilhaug heading into her second campaign. Given a chance to earn a starting spot this season, the sophomore has solidified herself on a powerhouse Red Storm squad.

“[Laura] has worked hard over the last few years and took full advantage of the chance she was given,” said Kvilhaug. “Those really are the two characteristics that all athletes and really, all walks of life who succeed in an endeavor have – a solid work ethic and seizing an opportunity when it knocks. Laura is really bright, determined and positive so while her production has been a very welcome contribution, I am not surprised.”

When opportunity wasn’t knocking last year, Delgado relied on the help of family, friends and faith to maintain her “positive attitude.” She also credits the veteran leadership on the team for advising her through her first season-and-a-half in Queens.

But now, she finds herself as a key cog in a St. John’s lineup that leads the Big East in runs scored, home runs and slugging percentage. It is a relentless attack that can feature a new hero day-in and day-out (teammate Gretchen Bowie picked up her first conference player of the week award on Monday).

A big matchup with the only team looking down at the Red Storm in the standings, those DePaul Blue Demons, looms this weekend. According to Delgado, all St. John’s has to do is what they do best: keep on mashing.

“We definitely need to keep hitting the ball,” she said. “We need to come into it and take it just as any other team, don’t worry about the name on their jerseys. Just go out there like any other game. I think it’s important that we sweep.”