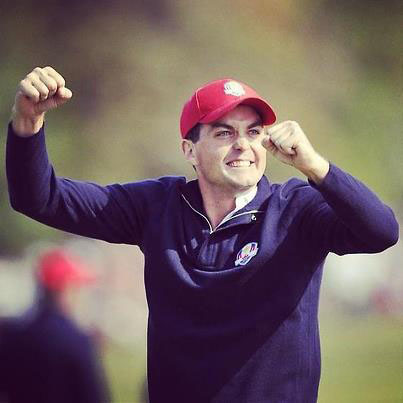 Keegan Bradley at the 2012 Ryder Cup at Medinah Country Club.

For former St. John’s golfer Keegan Bradley, winning had become a distant feeling before this past weekend’s BMW Championship. The last time Bradley had won a PGA Tour event was in 2012 at the WGC Bridgestone Invitational. That however all changed Monday afternoon at a rainy Aronimink Golf Club as Bradley narrowly beat out Justin Rose in a playoff to capture his fourth PGA Tour victory

“This has been a hard road back”, Bradley said after the win. “I just can’t believe it”.

At his time at St. John’s, Bradley, collected numerous accolades including nine individual titles as well as several team titles. Bradley also holds the lowest round in program history with a first round 63 at the Treasure Coast Championship in his junior season.

After graduating from St. John’s with a bachelor’s degree in sports management in 2008, Bradley turned pro and had a lot of success on mini tour’s before earning his PGA tour card in 2011. In 2011 Bradley earned his first victory at the HP Byron Nelson Championship and would later go on to capture his first major at the 2011 PGA Championship. To cap off a great 2011 season on tour, Bradley was named PGA Tour Rookie of the Year.

Bradley went on to win one more time on tour in 2012 and was also named to two Ryder Cup teams in 2012 and 2014 as well as one Presidents Cup team in 2013. Since then however, Bradley was able to find only limited success.

Fast forward to this past weekend, Bradley stunned the thousands of patrons by climbing all the way back from 30th place to eventually taking the lead with a few holes to play. However Bradley boggied 18 while Rose birdied 17 eventually sending the two into a playoff duel for the tournament.

Bradley would calmly tapped in for par on the first playoff hole after Rose bogied to capture his first title in six years.

After the round Bradley summed up the feeling of winning for the first time in a while saying, “ For a little while I didn’t know if I was going to be able to get back to this spot, and today I did it.”

With the win Bradley now moves into sixth in the Fedex Cup standings while also capturing his first Tour Championship birth since 2014. He also gains an invitation to every major championship next year and with the PGA Championship being played just down the road at Bethpage State Park’s infamous Black Course, Bradley could add another major win at the same place where his career started.