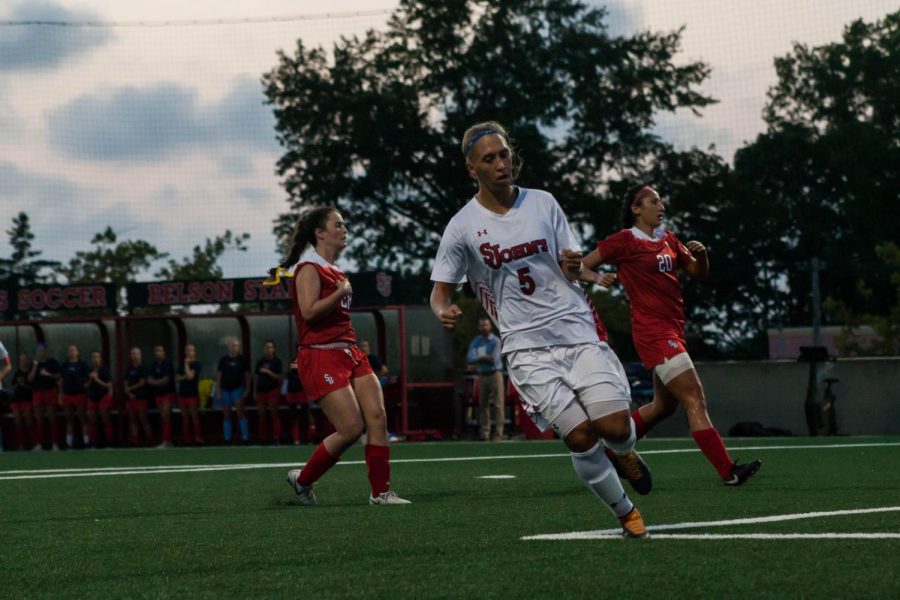 Determined. That is the most fitting way to describe redshirt sophomore Zsani Kajan of the St. John’s Women’s Soccer team. Her overall goal for her soccer career at St. John’s is simple. Kajan wants to be named the Big East Player of the year, for her team to win the Big East Championship and to move onto the NCAA Tournament.

Her philosophy for setting the bar so high for herself is all part of the reason why she has been so successful throughout her career.

“I think you need to raise your goals,” the red shirt sophomore from Budapest, Hungary said. “Because if you raise them, then you can reach them.”

For Kajan, coming to America to play college soccer had always been a goal of hers.

“I had always wanted to come to America to study and play [soccer] here,” Kajan said.

Kajan received an offer to play for St. John’s while playing for Hungary’s U-19 team in a tournament in Russia. There, she played against a team coached by Ian Stone and was eventually contacted by his staff shortly after. The process of getting clearance to come to St. John’s however, took longer than expected.

“It was a long process,” Kajan said. “After three or four years, everything had gone through and I could come.”

When Kajan arrived on campus in 2016, she was not nervous at all, despite being so far from home. In fact, she was more excited to showcase her skills in America.

“I wanted to bring my best,” Kajan said. “I was pretty excited.”

However, Kajan’s excitement  turned into disappointment as she went down with a torn ACL, preventing her from playing in her first season at St. John’s.

“I had never had an injury before I came here,” Kajan said. “It’s a long process and it’s a really dangerous injury, also because some players don’t come back to the field the same as they were [before the injury].”

ACL tears normally have a timetable of six to nine months in recovery time, depending on how bad the tear is. Rehabilitation after a tear can be challenging. For Kajan, however, her rehab process went better than expected.

“I knew so many good people who could help me,” Kajan said. “I had an amazing rehabilitation.”

Kajan eventually returned to the pitch for her redshirt freshman year last season and made a big impact early on. In the season opener against La Salle, Kajan connected on a shot from 20 yards out for her first career goal in a St. John’s uniform and was named to the Big East Honor Roll later that week.

“It was a good sign that I had comeback,” Kajan said.

Kajan would go on to score one more goal that came in the 67th minute against Villanova in October to help the Johnnies to a 2-1 victory over the Wildcats.

“I tried to focus on my strength, conditioning and skills [over the summer],” Kajan said.

This season, Kajan got off to a hot start as she racked up four goals in her first five games. The best game she has played so far in her collegiate career came on Sept. 2 when Stony Brook came to Queens. Kajan went off against the Seawolves, becoming the first female player to score a hat trick since Rachel Daly in October of 2014.

“That was a game where everything was successful,” Kajan said.

As of right now, Kajan currently leads the Big East in both points and goals, and looks to maintain that status going forward.Staying atop the Big East, however, is not a simple task and requires a lot of help from her teammates.
“Soccer is not an individual sport,” Kajan said.

As Kajan looks to continue to set the Big East on fire, she also wants her team to do well and hopefully win the Big East, earning a spot in the NCAA Tournament. The reasoning for her high aspirations is simple.
If you don’t set out for your goals, she said, “There is no point in playing soccer.”