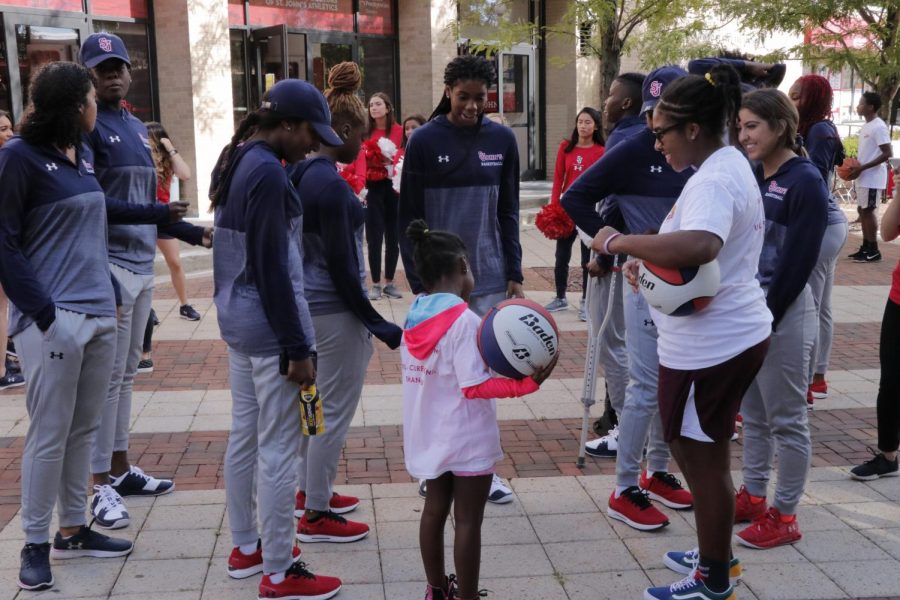 Fans of St. John’s got a chance to meet some of their favorite athletes at the event.

The St. John’s Men’s and Women’s Basketball teams hosted the eighth annual Dribble for the Cure event on Saturday to raise funds and awareness for the Pediatric Cancer Research Foundation.

Since its inception in 2011, the event has raised more than $500,000 to contribute to the work of Dr. Mitchell Cairo, chief of pediatric hematology, oncology and stem cell transplantation at Maria Fareri Children’s Hospital.

Each player of both teams was on hand to interact with fans and participants. The event started with a speech by Cairo in front of Carnesecca Arena before a countdown commenced the day.

Those in attendance dribbled basketballs around campus before settling in the arena to take pictures and meet the players during an autograph session.

“This event for me is just about being able to come out and do the little things,” Marvin Clark II said. “There are a lot of people who don’t have what we have, what we take for granted. That’s really what it’s all about for me.”

Clark, whose little sister is partially deaf, said that he knows what events like Saturday’s can have on young kids.

Having participants come up to him and say that he is their favorite player means a lot to him, he said. The importance of having someone to look up to is something he is familiar with.

“Coming where I come from, I looked up to guys who are in similar shoes that I am,” he said. It means a lot to be someone’s favorite player. Just saying that means a lot.”

Women’s Head Coach Joe Tartamella was in attendance for the event, as well as St. John’s coaching legends Lou Carnesecca and Jack Kaiser.

Tartamella said that the event is for a great cause, and he was grateful to be in the presence of kids and to see the smiles on their faces.

“What Dr. Cairo has done-and everybody who has raised money for the foundation to fight pediatric cancer-is such a cause we have gotten behind as a university and as a program, and we’re really pleased that all of you are here.”

Two young attendees, Danny and Hanif, are both cancer survivors. According to his mother, Hanif only had a 20 percent chance of surviving sickle cell disease. He was critically ill and on a ventilator. With his mother as the bone marrow donor, a successful transplant was completed.

“We are forever indebted to Dr. Cairo,” his mother said. “We actually call him our hero. We love him and all of the doctors of Maria Fareri Hospital. We are so grateful.”

Justin Simon, a junior forward who has participated in the event three times, said that it’s important to raise awareness for a cause such as cancer research. He praised the school for hosting the event and was excited to meet all the kids in attendance.

“Just to have an effect and to participate in the event with the kids and represent St. John’s is big,” Simon said. “It’s always fun to connect with kids and show them you’re a regular person just like them.”