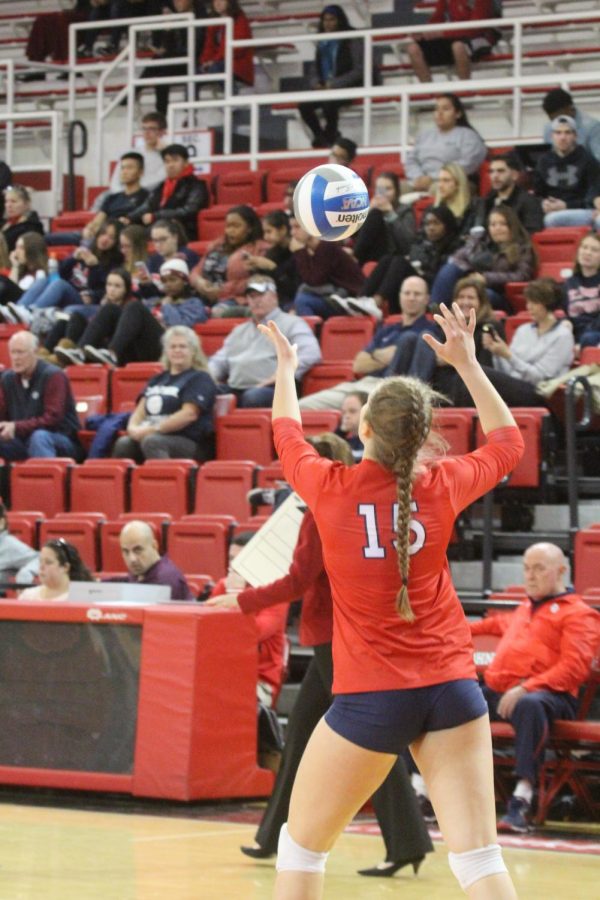 Kayley Wood has been a vital part of the volleyball team’s early season success at SJU.

The St. John’s volleyball team has charged their way through September thus far all the way to a 12-5 start. The Red Storm opened their season with the Jack Kaiser Classic in Carnesecca Arena.

The team defeated Manhattan College and Central Connecticut State on the first day of the tournament, with a convincing performance from freshman Rachele Rastelli as she tallied nine kills, four aces and three blocks versus the Jaspers. The first-year player from Italy followed up that strong performance with 23 kills and two blocks against the Blue Devils.

They continued their success throughout the tournament, eventually going undefeated and being crowned victorious as they took down Fordham and Eastern Michigan on the second day of play. Rastelli had another huge match in the finale, finishing with 17 kills, four aces and four blocks. It was the Johnnies’ third straight Kaiser Classic tournament victory.

By the end of the tournament, Rastelli was named Big East Freshman of the Week.

The team then traveled to Ithaca, N.Y. for the Cornell Invitational, in which they faced off against Siena, Buffalo and Cornell. They went 2-1 at the Big Red’s home arena, only losing in five sets to the Buffalo Bulls.

Heading to Stony Brook the following week, the Red Storm held a 5-1 record. They brought their success with them, grabbing their sixth win against the Seawolves in four sets behind strong play from redshirt junior Nia Diaz and sophomore Kayley Wood.

The Johnnies’ next stop was Texas for the Fredonia Hotel Holiday Inn Express SFA Invitational where they faced off against Stetson, Stephen F. Austin and Tennessee State. They had their first dip of the season, going 0-2 in their first two matches against Stetson and SFA, only to recover and finish off the tournament with a victory over TSU. Amanda Sanabia and Jordan McCalla shined in Texas, despite the losses.

The following week, the team made a pitstop home for a match against Hofstra, in which they dropped in three close sets. This dropped their record to 8-4, but the Red Storm didn’t let it bring them down as they headed to Storrs, Conn., for the UCONN Dog Pound Challenge. They swept the competition in their final matches before conference play as they defeated Rutgers, Holy Cross and UCONN, ultimately winning the tournament. Freshman Efrosini Alexakou  took home the title of tournament MVP.

After the team’s tournament in Connecticut, more Big East honors were given out to Red Storm players. The conference named Alexakou the Big East Freshman of the Week, becoming the second St. John’s player to earn that award this season.

In addition to Alexakou’s honor, Amanda Sanabia was named to the Big East Weekly Honor Roll for her performance at the Dog Pound Challenge. Sanabia’s 60 digs during the tournament led the team.

This past week, St. John’s began conference play opening up with a 2-1 in the Big East. Their first three conference games have gone the full five sets. They were taken down by Georgetown 3-2 in the nation’s capital on Wednesday, then bounced back against Xavier in Carnesecca on Friday.

It was a thrilling victory on Friday night against the Musketeers, as St. John’s found themselves quickly down 2-0 after Xavier won the first two sets. The comeback was anchored by sophomore Kayley Wood, who led the team with 16 kills in that game.

On Saturday, they went set for set with Butler, until finishing the Bulldogs off in the fifth set for their second straight win.

The Red Storm will continue Big East play this coming week with matches versus Villanova and Seton Hall.

While sitting at just 8-6, Villanova is coming off a recent win over nationally ranked Utah. Seton Hall, on the other hand, sits with a 5-12 record and has lost all three of their conference games.