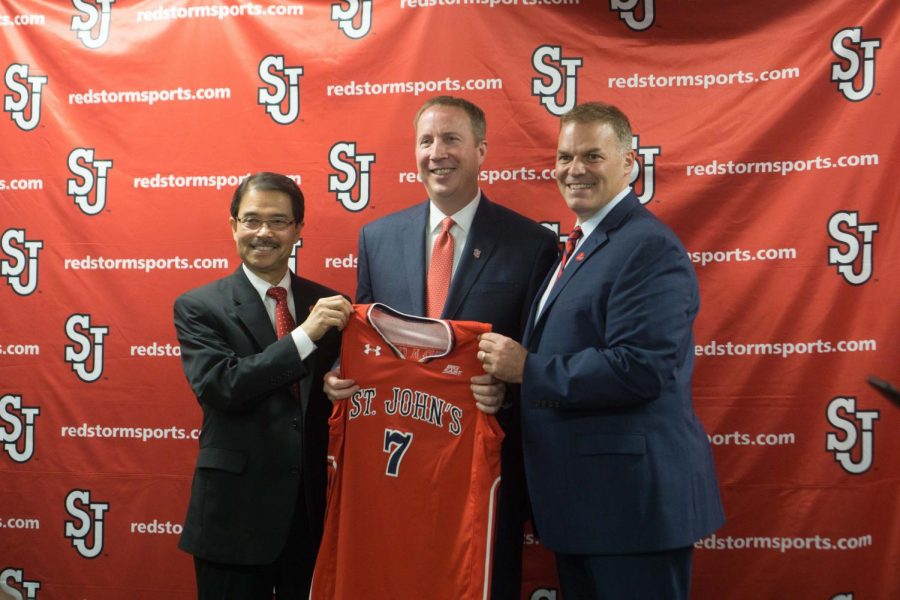 During his 30-plus years in North Carolina, Cragg served as the senior administrator for the men’s basketball team since 2000, and most recently served as the Blue Devils Deputy Director of Athletics and Chief Operating Officer. He oversaw facilities and planned for all 27 of Duke’s athletic programs. He also played a vital role in shaping Duke’s historic men’s basketball program.

With his introduction to the Red Storm Cragg talked about his history, some of his goals and his key three factors for success, family, imagination and care.

President Conrado “Bobby” Gempesaw kicked off the event introducing the Washington state native along with his satisfaction on the new athletic director pick.

Cragg started off with telling what drew him into St. John’s — the warm sense of family.

“As you can see today we are family first,” Cragg said. “It was clear right from the first time we stepped on campus how much people love St. John’s. Not just like it, they love it.”

Cragg’s wife of 30 years and two daughters were in attendance, whom he thanked for coming from California for his induction into the St. John’s family.

He proved to his listeners that family is his biggest support system, but admitted that what made everything feel “official” was talking on the phone with Lou Carnesecca. He joked he got Carnesecca’s phone number from Chris Mullin.

“It’s always been my dream to be AD, and to see you’re still here and coming to the office and still working is an inspiration to all of us in college athletics,” Cragg said of former AD Jack Kaiser.

Cragg credited his mentor Dr. Kevin White for instilling in him “imagination.” Dr. White is the Athletic Director at Duke. While in the process of interviewing for athletic director positions, Cragg said White’s advice to him was to imagine he was at the press conference.

“I’ll tell you the secret is every time I was talking [in interviews] I was imagining this day, and so dreams come true. My imagination led to good things,” Cragg said. “That’s the beauty of college sports, one can dream and imagine.”

He made sure to mention St. John’s vast history of success in collegiate athletics.

“Whether it’s fencing, lacrosse, soccer there’s a great history here and I want to be part of that imagining of championships in the future.”

Cragg then explained the need for caring in his field. He said he feels this role makes him a caregiver for St. John’s, that everyone needs someone there for reassurance. “The kid business” is his way of saying he’ll be there for every St. John’s athlete.

“That’s been a part of our life whether it’s been teaching, girl scout leaders, coaching, we have cared for each other and we care for the community we’ve been a part of,” Cragg said. “That’s who we’re going to be caring for St. John’s.”

“I’ve been surrounded by people that believe in me…I will never forget that and we will always be good custodians and caregivers to St. John’s athletics,” he continued.

Cragg replaces Athletic Director of two years Anton Goff, who announced his leave from St. John’s in June due to family reasons. Despite the unexpected search for a AD, Cragg comes to St. John’s with much support from the University community.

“The Board of Trustees is committed to the success of St. John’s athletic programs,” said William L. Collins, Chairman of St. John’s Board of Trustees per an athletics press release. “I believe Mike possesses a deep and varied skill set that will allow him to foster the strategic growth of the Department of Athletics moving forward.”