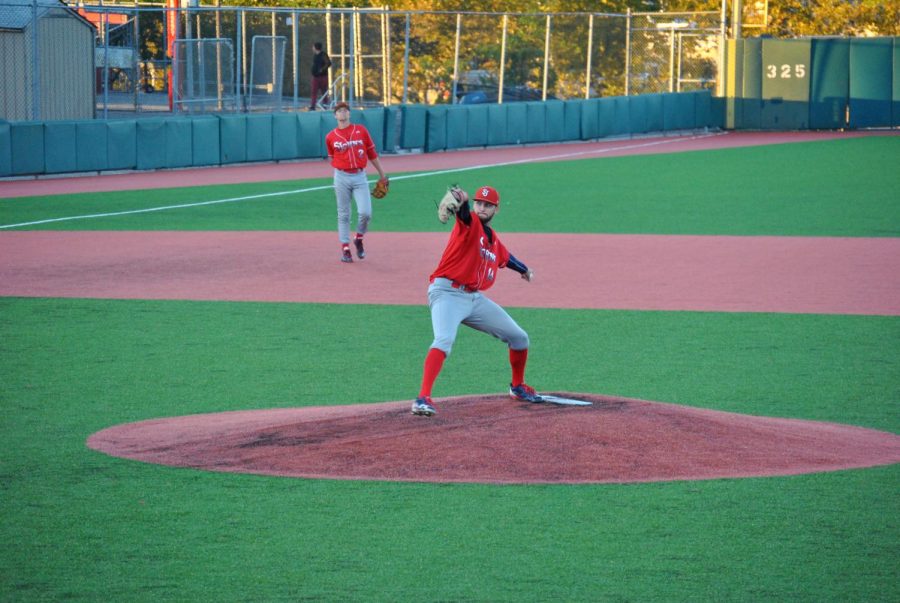 The chill in the October air couldn’t cool down the hot Red Storm bats against the Swedish National team Friday night, when the baseball team beat the Swedes 26-0.

The Red Storm, playing in their first exhibition of the season, were able to make quick work of the Swedish opposition with Nick Mondak on the mound. Mondak impressed, pitching three innings, allowing one hit and striking out three with no walks. He made one start his freshman year in 2017 and has battled injury problems ever since, making this season one of great importance for Mondak.

“It feels nice to be back out there, my arm feels good, I feel pretty confident in my stuff. I’m just happy to be back,” Mondak said.

“You have to trust what the doctors are telling you, if you just come in and do what they tell you to do, and don’t take any days off,  you will come back fine sometimes even stronger than before,” he said.

Mondak also participated in the New England Collegiate Baseball League over the summer to help his progress.

“It is hard to simulate the game with live hitters.” Mondak said.  He will look to be a big factor in a strong Red Storm rotation this upcoming season.

“It looked good to see him out there. He broke the ice,” Head Coach Ed Blankmeyer said.

Junior outfielder, Mike Antico, ended his sophomore season with a .308 batting average, but is looking forward to the 2019 season.

“I think we are going to be a scrappy team, we got a lot of guys that can run and hit the ball well. We are going to have to be a tough team, but I think we can compete,” Antico said. Antico, the “quarterback” of the outfield in center field, will have to help his new teammates adjust to Blankmeyer’s system. Antico believes is up for the task.

“We just need to work, a lot of communication while we are out there. I try to talk to them between every pitch whether to move in move out.  I think after they get a lot of reps they will be fine,” Antico said after the game against Sweden, where he had a walk and RBI double. Antico isn’t resting on his successful sophomore season.

“I try to come in early and stay late. I think that putting in the extra work will get me to where I want to go,” Antico said.

Blankmeyer will be challenged this year, with a large portion of his squad from last year leaving and now having to put together a team that hasn’t played a lot with one another.

“It’s no secret we have a veteran pitching staff along with an inexperienced team.  It’s going to take these guys a while to gel a little bit,” Blankmeyer said. Blankmeyer continued on to say that these scrimmages and inter-squad games are what helps him evaluate the team.

“A night like this can build a bit of confidence and I think is good for us,” he said.

No matter the adversity that Blankmeyer and his players face, he says the goal never changes.

“There is only one goal. This team plays for championships.”