COURTSIDE: Let the Talent Speak for Itself 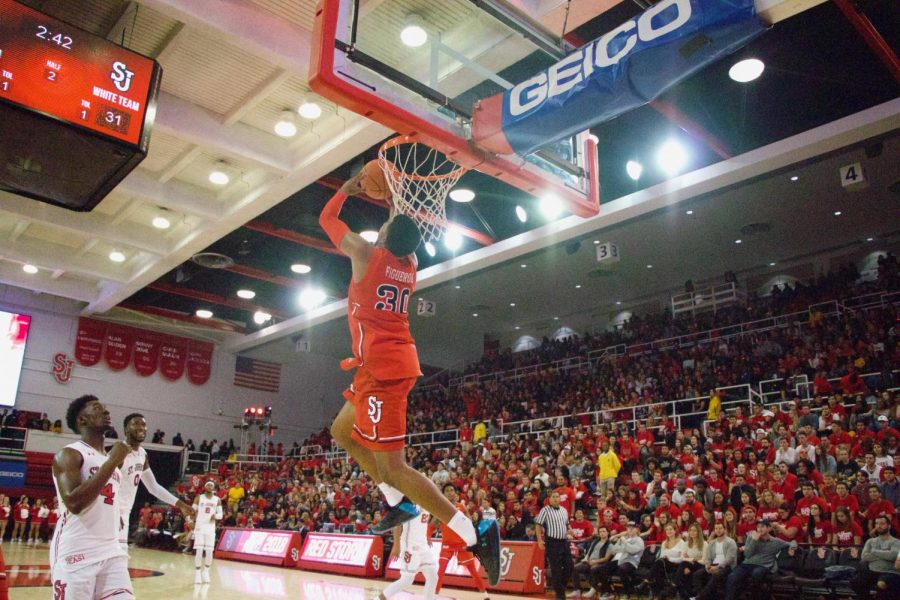 Before Tip-Off on Oct. 12, the casual St. John’s basketball fan might not have known about L.J. Figueroa. The hype belonged to returning star Shamorie Ponds and incoming transfer Mustapha Heron. Things have changed.

The soft-spoken Figueroa broke out in a loud way at Tip-Off, introducing himself with passionate dance moves, sweet mid-range jumpers and thunderous alley-oop finishes. Figueroa’s endearment to the Carnesecca Arena faithful proved to be the culmination of a long journey that’s taken him all over the continental United States. After looking for the right spot, Figueroa had no doubt in his mind where the journey would take him next.

A native of Lawrence, Mass., he has used his travels around the country to refine his game and learn new skills. Figueroa split time in high school between his native Massachusetts and Florida. With stops in Orlando and then to Odessa Community College in Texas, where he played a season of junior college basketball, he learned the foundations of each place’s unique basketball culture.

“When I was in Florida, kids were dunking on each other. I had never seen that, ”Figueroa said at St. John’s Media Day in October. “I thought that only happened in mixtapes.”

When Figueroa steps onto the court, he feels like he’s representing a culture that stretches far beyond anything basketball-related. Before displaying his wide array of skills on the newly-minted hardwood at Carnesecca Arena at Tip-Off, Figueroa had already garnered a large cheer when he came out of the fog-tunnel proudly showing off a Dominican Republic flag.

“It’s so important to me. It always reminds me of who I am,” Figueroa said.

Figueroa showed his strong ties to the Dominican Republic by representing the country in the 2016 FIBA U18 Championship of the Americas, where he was stacked against current NBA players such as Markelle Fultz, Shai Gilgeous-Alexander and Michael Porter Jr.

In the five games that he played, Figueroa finished as the fourth leading scorer in the entire tournament, scoring 14.6 points per game, including a 25 point outburst against Chile.

When the news broke that Figueroa decided not to pursue Division I basketball right away, analysts insisted that fans remember the name. Early in his time in Queens, Figueroa is backing up the hype and impressing his teammates.

“L.J. Figueroa is a guy that’s going to surprise and shock a lot of people,” redshirt senior Marvin Clark II said at Big East Media Day. “He resembles me a little bit, just not as strong, but he’s a lot more athletic. “

Clark II sees his role as the leader for new players like Figueroa as a rite of passage.

“I remember like it was yesterday when I was a freshman,” Clark II said. “It’s only right, the roles are reversed. I try my hardest to help our new and younger guys every day.”

Despite the praise, Figueroa isn’t quite satisfied with everything about his game.

“Just different strategies and learning all the defensive techniques, I think that’s where I need to grow the most,” Figueroa said.

Figueroa’s journey to St. John’s is relatively similar to that of former Red Storm forward Bashir Ahmed. Both players grew up in the Northeast — Ahmed is a native of the Bronx — and both players became All-Americans at the Junior College level before returning to the Big Apple for careers at St. John’s.

Look a little deeper and you might see many similarities between Ahmed and Figueroa’s game. Without yet seeing him in organized Division I action, Figueroa appears to be a more efficient player with Ahmed’s skill set. They both possess a quick first step with the ability to score at all three levels of the court.

While the St. John’s coaching staff most likely knows what they are going to get day in and day out from players like Ponds, Heron, Clark II and Justin Simon, the key for the Johnnies this season will be the newer, less-known names on the roster.

But don’t be mistaken, it shouldn’t take long for L.J. Figueroa’s game to introduce itself.