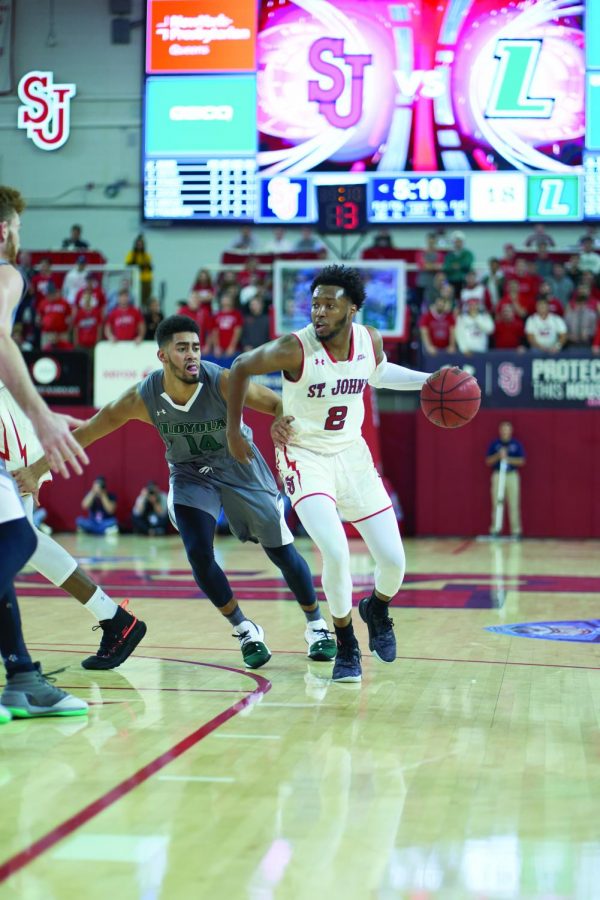 After months of waiting and letting the hype build, the St. John’s Men’s Basketball team delivered with a strong season opening performance to defeat Loyola (Md.), 76-55 on Tuesday night at Carnesecca Arena.

With a combination of efficient performances from returnees such as Shamorie Ponds, who scored 20 points, and debutants, such as Mustapha Heron with 15 points and LJ Figueroa who rocked Carnesecca Arena with multiple dunks from the run of play, the Johnnies never trailed against the Greyhounds.

After a sluggish performance last Thursday against Division II opponent Maryville, Head Coach Chris Mullin was pleased with the team’s outing on Tuesday.

“The effort was a lot better … I thought we did a good job,” Mullin told reporters after the game. “Playing defense without fouling is something we have to get better at, but I rather be more aggressive and tone it down a little bit.”

Mullin’s statement on the team’s defensive mentality certainly rang true on Tuesday night. The Red Storm made every pass that Loyola tried to make a difficult one, proved by Loyola’s 24 combined turnovers. Many of the fouls called against the Red Storm resulted after the team was working relentlessly to either fight over screens or deny a big man receiving a pass into the post.

The game struggled to find any flow in the first half due to the accumulation of fouls. Sedee Keita barely had been on the court in his debut for St. John’s before being sent back to the bench after accumulating two quick personal fouls. Keita ended up fouling out of the game with just under 10 minutes left in the second half.

Heron, a transfer from Auburn University, enjoyed a warm welcome to the confines of Carnesecca Arena. Heron impressed with his wide variety of abilities to score. He shot 50 percent overall from the field while hitting both three point attempts that he took and shot 75 percent from the free throw line.

“It’s a blessing [to have Heron],” Ponds said after the game. “He can score inside and out, defend, rebound. He’s a great added piece that was definitely needed.

Figueroa’s nine points in his debut at Carnesecca Arena were more about the quality over the quantity. After Marvin Clark II missed a floater, Figueroa soared in from outside the paint to rise higher than the other nine players on the court to electrify the crowd. As if that wasn’t enough, Figueroa followed-up his put back dunk with a thunderous alley-oop finish coming off a pass off the backboard from Heron.

Redshirt junior Justin Simon was relatively quiet, but showcased a newly renovated jump shot. Simon looked comfortable backing opponents down in the midrange and then converting on the ensuing fadeaway jump shot. Simon’s improved jump shot will add a new element to what is already an offense with a diverse skillset.

The Red Storm will be back at Carnesecca on Friday night when they play host to Bowling Green. Tip off for that game is scheduled for 6:30 p.m.