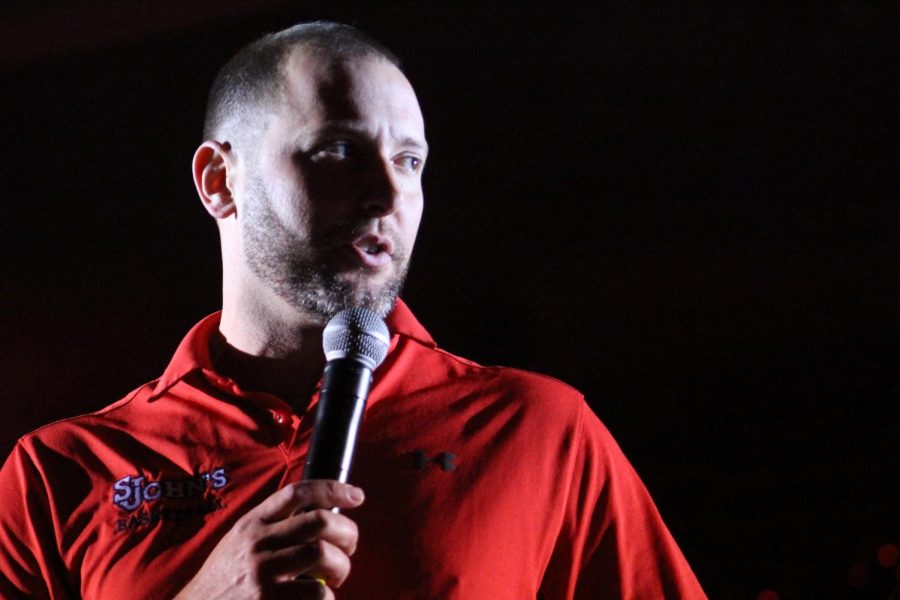 St. John’s vs. Georgetown (2017); After what seemed like a pretty innocent foul from Amar Alibegovic on a Georgetown player, tempers flared, leading to a sideline scuffle to bring old Big East nostalgia to the forefront of college basketball. However, this time it was Mullin versus a different member of the Ewing family (Patrick Ewing’s son, Pat Jr.,) St. John’s against Georgetown. The Red Storm ultimately pulled this one out in thrilling fashion, winning 74-73 giving Chris Mullin his first Big East Tournament win as Head Coach.
Back-to-back wins over Syracuse 2015, (2016); There weren’t many moments to pick for this list from Mullin’s first season in charge. But a strong performance at Madison Square Garden led by Federico Mussini and Amar Alibegovic fueled the Johnnies to a big victory over old rival Syracuse, who would make the Final Four later that season. Fast forward to Mullin’s second season in charge, when St. John’s went up to the Carrier Dome and left after running Syracuse out of the gym by a score of 93-60.

Shamorie Ponds’ 44 point outburst vs. Marquette (2018); Lost in the madness of the back-to-back wins over Top 5 teams last season (which we’ll get to later), Shamorie Ponds concluded that week by scoring 44 points against Marquette and setting the single-game scoring record of all-time at Carnesecca Arena. Ponds scored more than half of the team’s 86 points on the day and continued the magical week following that dreadful 11-game losing streak.

St. John’s beats #13 Butler (2016); The Syracuse wins were nice, but this game was Mullin’s first signature Big East moment as Head Coach of his alma mater, and showed promise of what could come. In front of a sold out Carnesecca Arena, the Big East was introduced to Shamorie Ponds (26 points) and the Red Storm took down the 13th-ranked Bulldogs 76-73 with some late game heroics.

Wins over Duke, Villanova (2018); The obvious decision here. These two wins alone were bright lights at the end of an extremely dark and miserable tunnel. The team was on an 11-game losing streak, star point guard Marcus LoVett was caught up in a strange injury situation and what was once looking like a promising season had fallen apart. However, two days in February changed it all. On national television and at The World’s Most Famous Arena, St. John’s upended #4 Duke and charged down I-95 a few days later to stun the top-ranked, and eventual National Champions, Villanova.

Aliyyah Handford and Danaejah Grant drafted (2016); Handford left St. John’s as the program’s all-time leading scorer and Grant wasn’t far behind on the leaderboards, finishing as the ninth leading scorer in program history upon her departure. Both players were drafted, just four picks apart with Handford being the 27th overall pick to the Connecticut Sun while Grant was taken with the 31st pick by the Washington Mystics.

Joe Tartamella wins 100th game (2017); A late-game surge by the Red Storm secured a win over Providence to give Tartamella his 100th win as Head Coach of St. John’s, becoming the fifth coach in program history to do so. The milestone in just his fifth season leading the Red Storm signifies the strong and consistent culture that he has built as coach.

Maya Singleton ties rebounding record (2018); One half of the team’s dominant front court last season, Maya Singleton tied a 41-year old program record on Dec. 18 of last season when she grabbed 24 rebounds en route to a double-digit overtime win against the Kansas Jayhawks. Mary Doyle is the only other player to match Singleton’s historic night with her 24 rebound performance in 1976 against Brooklyn. With stat lines like this, it helped Singleton average a double-double (11 points, 10 rebounds per game) during her senior season.

Big East Tournament title 2016; Again, this was the obvious choice for the top moment of Coach Tartamella’s tenure. The Johnnies stunned top seed DePaul on their home floor with some late-game heroics and then followed it up with a stifling performance against Creighton to take home the program’s first conference title since 1988.