Volleyball Loses in the First Round of NIVC 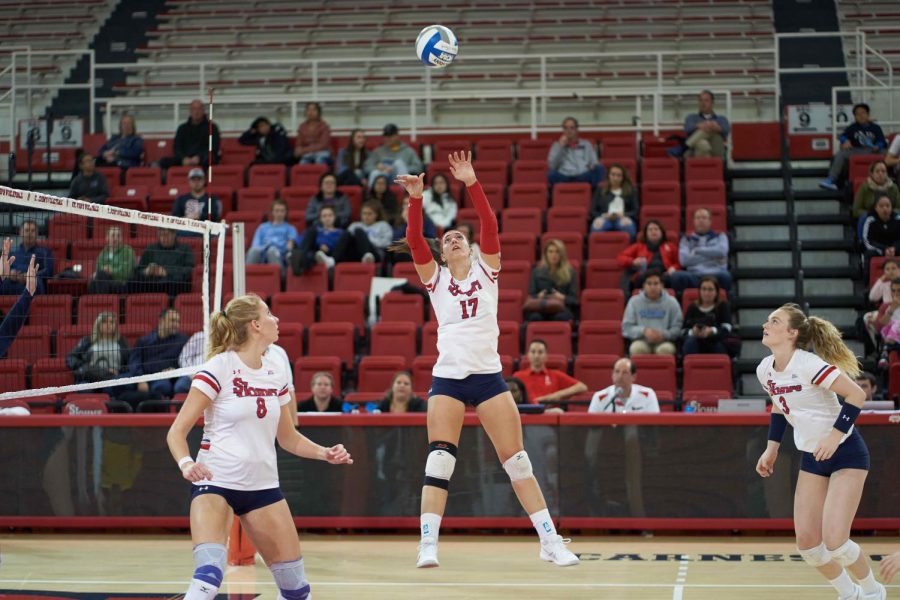 A historic season for Red Storm volleyball ended with a bitter defeat to the College of Charleston in Atlanta.

The Red Storm were unable to continue their run of dominance this season at the National Invitational Volleyball Championship (NIVC). This defeat should in no way take away from the incredible season they accomplished. The team finished with a 23-12 record, their most wins since 2007, and an appearance in the Big East semifinals for the first time since 2012.

Coach Joanne Persico had another award-winning season at the helm of the Red Storm. Persico and her coaching staff were awarded a second Big East Coaching Staff of the Year award. Persico’s leadership and coaching acumen were on full display throughout the season on the court. In Perisco’s 25th season at the helm of St. John’s Volleyball, she put together a team with a mix of youth and veteran leadership.

The Red Storm were able to rebound after a tough 2017 season where they finished with a 15-18 record. The key for the Red Storm was consistency. They were able to avoid long losing streaks and always seemed to rattle off wins when they needed to, even when their back was against the wall. The Johnnies finished third in the Big East Conference, only behind Marquette and Creighton. Creighton and Marquette finished the 2017 season in first and second place respectively with little change in their overall record.

An outstanding first year campaign by Efrosini Alexakou led to her receiving two Big East awards, Big East Freshman of the Year and a selection to the Big East All-Tournament team. A native of Thessaloniki, Greece, Alexakou lead the Red Storm in kills and finished the season ranked fifth in the Big East for kills per set with 3.55. The 6-foot-1 freshman will look to be a key cog in what surely will be a hopeful season in 2019.

Freshman Rachele Rastelli, like Alexakou, finished a tremendous rookie season for the Red Storm. The Parma, Italy native finished the season with 333 kills, only three behind Alexakou for the team lead. Rastelli also finished second on the team in blocked shots with 10 and 4th on block assists with 74. The right-side hitter brought plenty of foreign experience to the Red Storm this season with her experience playing for clubs in Italy.

With the youth of this Red Storm team shining the brightest in this memorable 2018 season, one can only hope to see what the future of this squads holds for the next three years of Alexakou and Rastelli.  Both of them will surely be looked at to help lead this team back into the competitive seasons that fans were used to seeing in the early 2000s but have been lacking in recent years.

Ending a season without a championship and calling it a success in New York is rare. However, after a season where the program returns to the postseason for the first time since 2012 and was led by two-star freshmen the progress witnessed was encouraging to say the least.

This season can be looked at as a success but 2019 will be the year Red Storm fans and players will be looking for this team to take the next step.