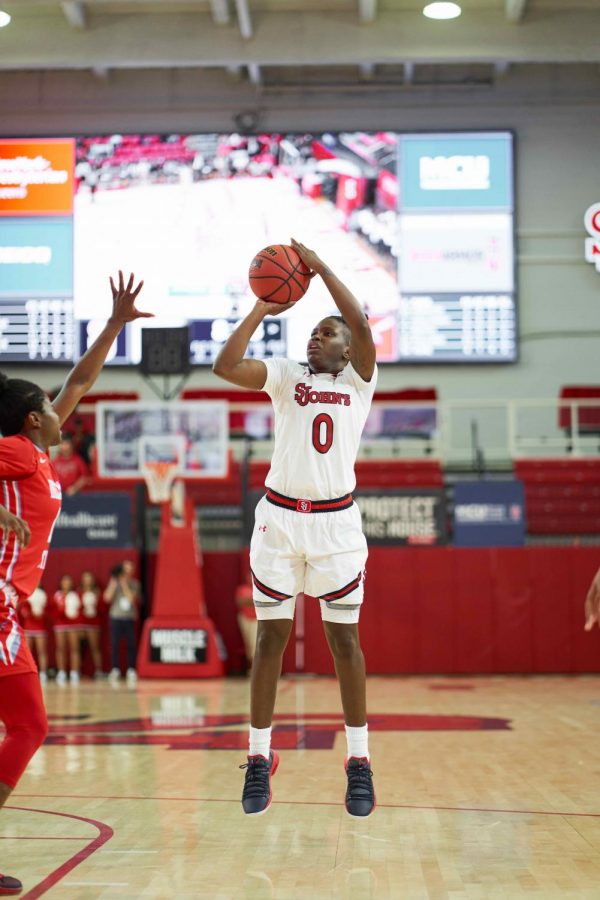 Alisha Kebbe shot 71 percent from the field in the team’s win over Delaware State.

Without playing a home game within the confines of Carnesecca Arena until last Thursday, the St. John’s women’s basketball team opened up the season strong, winning five of their first seven games in convincing fashions.

The team’s only two losses are to undefeated and national power house UConn and ACC opponent Wake Forest on Sunday. Of the team’s seven games so far, only one has been at home, so the Red Storm  players have had to get used to life on the road.

“When you’re on the road, you’re spending more time together,” Head Coach Joe Tartamella said after the team’s 82-44 victory over Delaware State last Thursday. “Having success and winning on the floor helps that bond even more because some more buy-in to what you are doing.”

One thing that Coach Tartamella’s roster has bought into early in this season is defense. At Big East Media Day in October, sophomore Qadashah Hoppie said that defense will always be the identity of the Red Storm, no matter who the opponent is.

No team, even the feared UConn Huskies, has been able to score more than 70 points on the season against the Red Storm. St. John’s is the only team that has kept the Huskies under 80 points on the season. In the team’s two losses, they’ve only given up 65 and 64 points, respectively.

The tone for the Johnnies has been set with the strong backcourt play of Tiana England and Hoppie. England’s impact of the game might not show up on the stat sheet with her 9.7 points per game, but her ability as a floor general allows the team’s offense to open up.

Her assist to turnover ratio is over 3:1 and she’s only turned the ball over 15 times in seven games, while averaging over 37 minutes per game. Her ability to spread the floor allows for players like Akina Wellere (9.7 points per game) and Hoppie (12.3 points per game) to get uncontested shots and let the offense flow.

After Maya Singleton and Imani Littleton graduated in May, a lot of pressure was put on sophomore Kayla Charles and newly eligible player Curteeona Brelove. Both have delivered. In the game against Delaware State, both registered double-doubles in a dominant performance on the glass, when the team outrebounded the Hornets 56-28.

Charles secured her double-double with 11 points and 14 rebounds in just 12 minutes of action, which Tartamella called “sick” after the game against Delaware State. Brelove, a transfer from VCU, has averaged nine points and six rebounds on the season.

The team only averaging 64.1 points per game might seem concerning, until realizing that they’re only giving up an average of 55 points to their opponents.

Early on, it’s been hard not to be impressed with the team’s defense. As the team continues to grow, and players like freshman Kadaja Bailey get acclimated to the system, the offense will come. For now, however, the Red Storm’s foundation is tenacious and in-your-face defense.