In front of a raucous crowd in Newark, Seton Hall edged the Red Storm 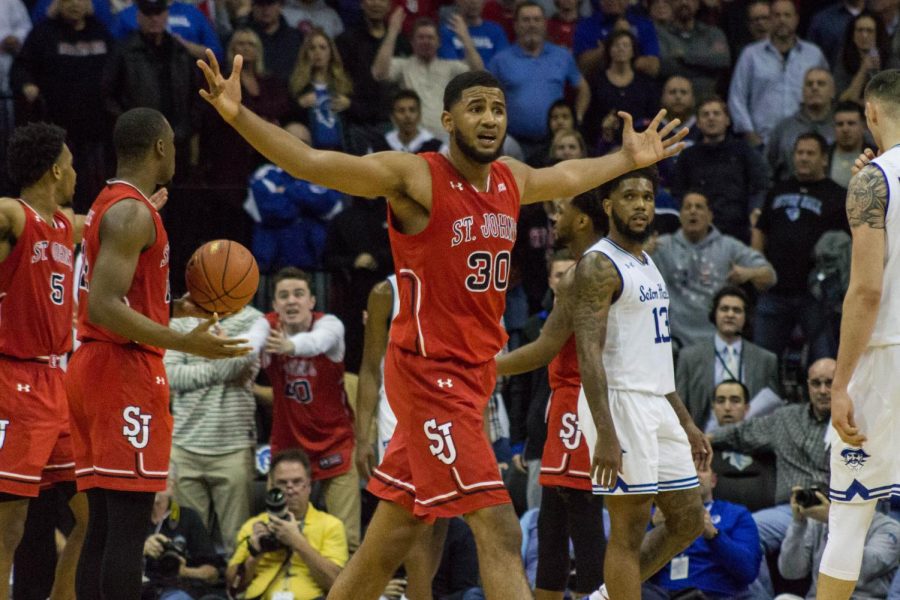 The Prudential Center was rocking Saturday night as the St. John’s Men’s Basketball team took on Seton Hall to open up their Big East schedule. Amidst the hype and the hoopla, both teams didn’t disappoint as fans were on the edge of their seats right down to the final seconds, with the Pirates pulling out a 76-74 victory after a second half surge.

The Red Storm led for most of the game thanks to Mustapha Heron, who dropped 19 points, as well as a pair of 16 point performances from Justin Simon and Marvin Clark II. As the game came to a conclusion, however, the Red Storm’s lead unraveled which set up a wild and controversial finish.

With 3.9 seconds left, the Pirates were set to inbound from under the St. John’s basket. The play was disrupted as LJ Figueroa came up with what appeared to be a clean steal that would have sealed the deal for the Red Storm. However, a whistle was blown by referee Michael Stephens before Figueroa’s heroic effort. After going to the replay monitor for what seemed like an eternity, the officials, Stephens, James Breeding and Tony Chiazza decided that the play was blown dead. This gave Seton Hall a second chance to inbound, and they wouldn’t waste the second opportunity.

After the game, John Paquette of the Big East announced that, “The officials decided it was a timing error, the clock did not start on the initial touch by the St. John’s defender on the throw in.”

When St. John’s Head Coach Chris Mullin was asked whether or not he received a reason for this ruling, he responded, “no, if you get one let me know.”

With their second attempt, Seton Hall’s point guard Quincy McKnight inbounded the ball to Sandro Mamukelashvili who drove and dished the ball to Shavar Reynolds, who then knocked down a three pointer over Heron to win the game for the Pirates. After yet another trip to the replay monitor, it was determined that Reynolds would shoot one from the line with four tenths of a second left after Heron fouled him.

With the loss, St. John’s’ undefeated season comes to an end. They now sit at 12-1 while Seton Hall improved to 10-3.

Although the game ultimately came down to an untimely call, the Red Storm struggled down the stretch, missing on multiple scoring opportunities and also failed to convert on multiple one-and-ones.

“I thought it was our ball movement or lack of,” Mullin said of the struggles down the stretch. “We will look at it on the tape but watching from where I was, we had guys open and just didn’t move the ball like we did in the first half.”

As for the missed chances from the line, Mullin said, “That’s part of the game, free throws, turnovers and moving the ball.”

The Red Storm will return home for a New Year’s day showdown against Marquette on Tuesday. The loss against Seton Hall in the opener puts more pressure on the Red Storm to get a quality home result on Tuesday.