Breaking Down Tuesday’s Showdown with Marquette 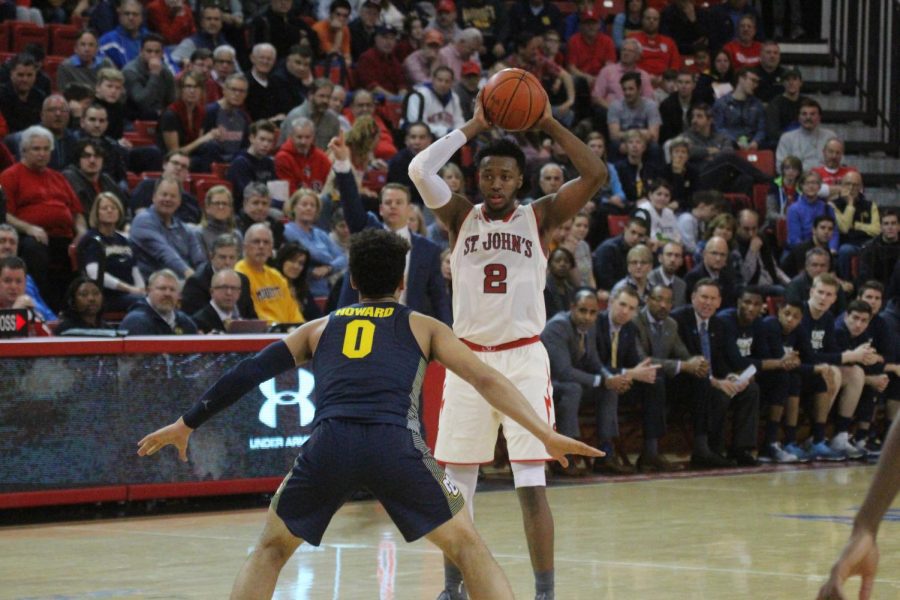 After a heart-breaking, controversial and draining loss to Seton Hall at the buzzer to close out 2018, St. John’s will have a chance to start off 2019 strong when #16 Marquette comes to Carnesecca Arena on Tuesday.

While St. John’s can certainly feel jaded by the referees for the way the game against the Hall ended, the Red Storm did surrender a sizable lead down the stretch after the ball stopped moving on the offensive end.

The showdown on New Year’s Day will be an important gauge in determining the mental toughness of this Red Storm team. They’ve battled against teams like VCU, and had a major comeback in the neutral site game against Georgia Tech, but they haven’t been put through an emotional gauntlet like the Seton Hall game yet this season.

With St. John’s having a record of 12-1, it might seem a bit dramatic to be calling this a must-win game. It is, however, fair to say that a win against Marquette would go a long way in helping to suppress what happened on Saturday night in Newark.

With only one vote in the AP Top 25 Poll released Monday morning, many pundits might be writing St. John’s off as pretenders after the loss to Seton Hall. This game, at home against a ranked opponent with quality wins, gives St. John’s a chance to make a statement.

It’ll be Marquette’s first Big East conference game, but they’ve had some tough tests so far. With an 11-2 record, they have wins over Buffalo, Kansas State and Wisconsin. Their only two losses have come against a then-ranked Indiana team and Kansas.

With players like Howard and the Hauser brothers, it’s clear they’re going to score in bunches and keep opposing defenses on their heels.

The Golden Eagles are only giving up 66 points per game, compared to last season when they were giving up almost 79 points per game. From behind the arc, opponents are converting on less than 30 percent of their long ball attempts against the Golden Eagles. They possess a lot of length, both on the interior and on the perimeter, that can help disrupt opponent’s shots.

Now it’s time to talk about the headline story for Marquette, their offense.

Howard (25.1) and Sam Hauser (14.6) are both averaging in double-figures and both score in an efficient manner, with shooting percentages in the mid-40s. Howard is one of those scorers that St. John’s might not be able to stop. It’s about keeping him under control.

If you need proof about Howard’s explosiveness, look no further than his performance against Buffalo. The Bulls did a terrific job of keeping Howard in check in the first half, but then the junior scoring machine pumped out 40 of his 45 points in the final 20 minutes which led to a Marquette victory.

Howard only played in one of the two games against St. John’s last season after missing the second matchup with a hip injury. In the game he played, he registered 18 points but only converted six of his 19 field goal attempts.

When facing Myles Powell from Seton Hall, who has a similar ability to score as Howard, St. John’s was able to keep him in check. Powell only scored 15 points in 39 minutes of action.

Hauser’s younger brother, Joey, presents another potential matchup problem for the Johnnies. At 6-foot-9, Joey Hauser shoots the ball well at a clip of 42 percent from behind the arc and 48 percent overall.

Despite Marquette’s potent offense, last time Marquette came to town it was Shamorie Ponds who stole the show by setting the single game scoring record at Carnesecca Arena with 44 points en route to a 86-78 win. That was the third consecutive victory for the Red Storm after wins against Duke and Villanova to end their 11-game losing streak.

St. John’s was looking to rebound from a season gone astray during that meeting. It’s too early in the season to say that the Red Storm’s back is against the wall, but a win on Tuesday will help start off 2019 on the right foot after a draining end to 2018.

As good as Marquette is, the Red Storm’s most challenging opponent might not be the Golden Eagles. This game is a huge test for the team’s mental toughness. This is a new type of test in the young Big East season.