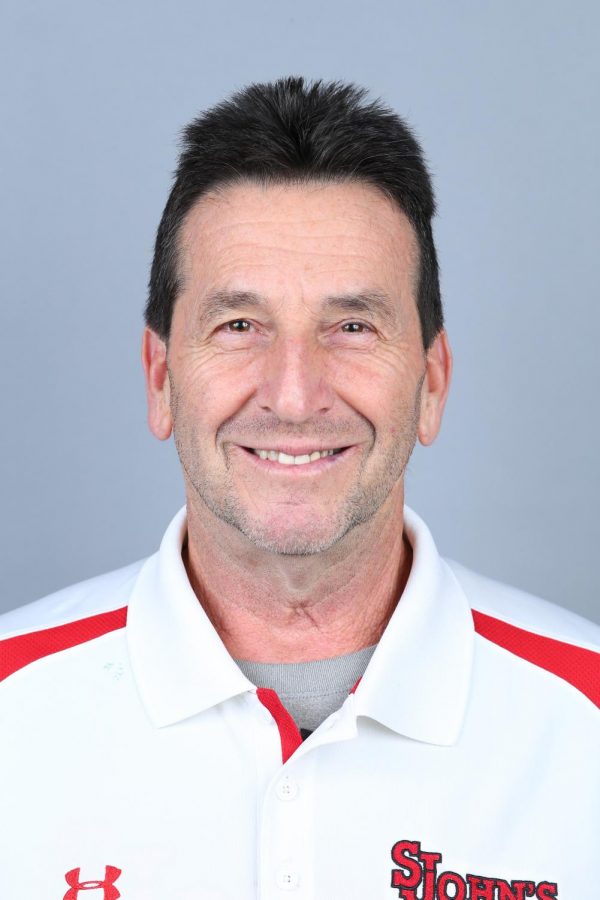 That’s evil only to the opposition. The longtime assistant specializes in hitting, with a focus on feedback by request. His first three years in Queens saw offensive futility turn into a swift .856 OPS-driven barrage.

Now he’s been handed the key to the St. John’s softball kingdom. Coach Amy Kvilhaug stepped down in September to pursue a performance coaching career. Guerriero was her top lieutenant and logical replacement, made official in early January.

He plans to take the Kvilhaug culture and shape it in line with his own philosophies. They share a fiery competitive spirit, and Guerriero painstakingly recounts undoings of recent postseasons. He’s confident this group can restore the regional success of 2015.

The Torch caught up with the first-time head coach before the team set course for Florida and the start of a new season.

THE TORCH: From a leadership perspective, how do you adapt the role you had as an assistant or associate coach?

T: How do you impart that kind of dominance? Is that on the field or more about how you carry yourself as a team?

G: I think it’s all of that. It’s attitude on the bench, not that you have to be a “rah-rah, cheer-cheer” kind of team. But you have to be into the game. Into the game covers a lot of things. You’re watching pre-game to see certain types of pitches and arm strengths of the outfielders and infielders as they warm up, all to complement our scouting reports. Yeah, on the field you have to backup your talk with your actions.

T: Have you been in contact with Coach Kvilhaug? Has she given you any advice?

G: I’ve had some administrative questions that we’ve talked about. I’ve also talked to her, as coaches do, to vent with one another. With recruiting too, she still has contacts. It’s bittersweet that she’s not here anymore because she gave me a chance to keep my career going at a time when I had no other doors opening. I’ll be forever indebted to her for that.

T: Last year, the team tore the cover off the ball. 62 homers, double any total since you came here [in 2013]. What is your offensive philosophy?

G: I tell the girls, “if it isn’t broken then I won’t break it.” I like to ask how adjustments feel. I’m not always the tech-savvy, micro-management, breakdown the swing type. I’ll just observe how they swing. If there’s something I see that’s affecting the outcome on the ball, then I’ll say something. I don’t have a cookie-cutter approach. All hitters aren’t clones. They all have their own individual style. As long as they’re not physically hurting themselves with some sort of contorted swing, then I’ll leave them pretty much on their own.

T: [Senior pitcher] Madison Morris gave you plenty of innings last year, but had some problems with the home run ball. That’ll be for her and the soon-to-be-named pitching coach to work on?

G: Yeah, without tipping our hand, Maddie has worked on pitches to complement her riseball. We expect her to do a few different things that the hitters won’t have in their scouting reports. Maddie’s very eager to get it going, and so am I. She’s used these other pitches on our hitters in practice and they’ve been very effective.

T: The season opens up against Sixth-ranked Georgia on Friday. What are you looking forward to in playing a team with that kind of talent?

G: A realistic result. We have a good core to work with. This core has played in plenty of big games over the years. They have plenty of experience and have faced upper echelon teams. I want them to go out and I want them to compete as hard as they can. Again, when that game is done, whether it’s Georgia or Bethune Cookman or a conference team, at the end of that game I want everyone to know that they played St. John’s. If we win, great. That’s a great feather in our cap. But it’s our first game out. I’m going to be realistic about things, too.