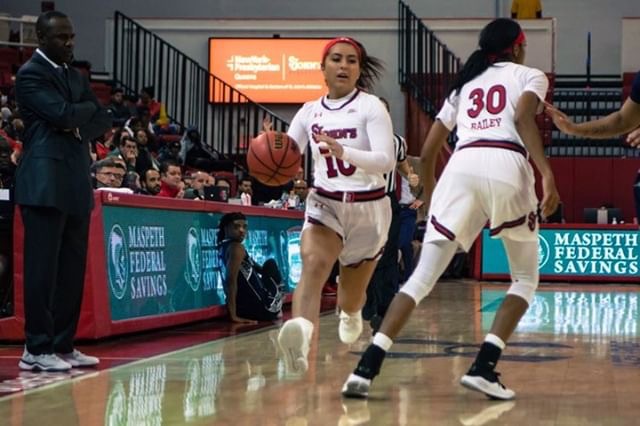 Jasmine Sina grew up in a basketball family which had a strong impact on her life.

In a collegiate career that has left nothing but memories and awards in the rear view mirror, this latest achievement leaves Sina feeling grateful.

“When I was selected, I was really grateful because I think it is a great opportunity to meet other athletes that have the same aspirations as me and other coaches that I can learn a lot from,” Sina said.

For Sina, this award is something she can take and use to help her in the next chapter of her life.

“Basketball has been such a huge part of my life, this is something that I can carry with me after I’ve finished with basketball and graduated and use it to not only help me as a player but as a person,”  Sina said.

For Sina, the coaching trait isn’t too far behind her. Her father, Mergin Sina, has been the head coach for Gill St. Bernard in Gladstone, N.J. for the past 10 years. Jasmine spoke about the impact that her father has had on coaching for her.

“Seeing him coach my whole life has really made me appreciate everything that goes into coaching, whether that is taking care of players outside of basketball and on the court,” she said.

Jasmine’s older brother, Jaren, had an impact on her as she watched him play professionally in Austria. The success stories around Sina have undoubtedly influenced not only the basketball player that she is, but the person that she is today.

When asked if she had coaching in her future, Sina says she has thought about it and it could be a real possibility for her.

“I have a very big passion for it (coaching). I think I can do very well at that position,”  Sina said.

Sina has led a career that has been nothing short of remarkable, being the star player on the Binghamton Bearcats to start her collegiate career, and ending her career as a graduate student for the Red Storm.

“My dream was to get to the NCAA one year and now that I am here have a chance to win the Big East Tournament,”  Sina said.

Sina is looking to help the Red Storm in any way that she can to give herself the best send-off possible, and at the end of the season, hang up her jersey for the last time.

“I just want to win, and I think we have a great opportunity to win with the team that we have here,” Sina said. Sina will look to do just that as she is approaching the back nine of her collegiate career.

After putting together award-winning seasons for the Binghamton Bearcats and now being selected to the “So You Want to Be a Coach” class as a member of the Red Storm, Sina will look to put the icing on the cake for what has been nothing short of a memorable collegiate career.

To have the opportunity to conclude her collegiate playing career while living her dream of playing Division I basketball is nothing short of inspirational to all fans and teammates of the Red Storm.