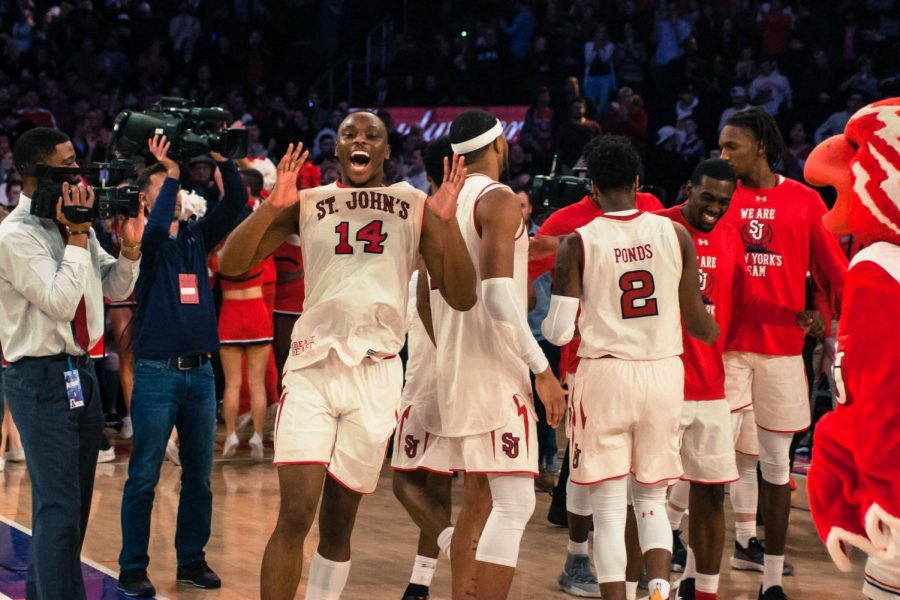 Some moans and groans began to mumble from the sellout crowd at Madison Square Garden. The visiting Villanova Wildcats had established a 19 point lead on St. John’s and the sea of red in the crowd began to voice their displeasures.

But then, one basket at a time —slowly but surely —the Johnnies made their run. Sparked by the team’s quiet star LJ Figueroa’s 22 points and 12 rebounds, the Red Storm came all the way back to take down the defending national champions, #13 Villanova Wildcats, 71-65 on Sunday at the World’s Most Famous Arena.

“Our defense came together in the second half and did whatever it took to get the win,” Figueroa said after the game. “I know my teammates have my back no matter what. Whether we’re down 10 or 20 or up 10 or 20.”

Sunday’s victory proved to be one of the first times this season that St. John’s has won when Shamorie Ponds hasn’t been his typical offensive-juggernaut self. The junior guard from Brooklyn had 11 points on 2-14 shooting.

When asked what this means for the team moving forward, being able to produce when Ponds has an off night, Mullin seemed impressed.

“That’s not a game we win, maybe even a month ago,” Mullin said in the press conference.

Figueroa and Mustapha Heron combined to score 41 of the team’s 71 points, including a series of three pointers in the second half to spark the MSG crowd.

One of the main turning points of the game came as the buzzer sounded for the end of the first half as Justin Simon threw up a prayer from three-quarters court that crashed off the backboard and fell threw the nylon, cutting the deficit to only 11 heading into the second half.

“We were screaming the whole time in the locker room that we could come back,” Heron said of the importance of the momentum swing that that shot gave the Johnnies.

Heron noted in the press conference that the game was almost the exact opposite of the previous matchup between the two teams. St. John’s controlled proceedings for most of the game before a late flurry from the Wildcats allowed them to leave victorious by a score of 76-71 on Jan. 8.

In addition to the offensive flurry, the team’s defense also picked up in final half. After giving up 37 points in the first half, St. John’s only surrendered 28 points in the final 20 minutes, allowing them to make their surge.

After the Wildcats got off to their fast start, Mullin said the coaching staff stressed being able to run Villanova’s shooters off of the perimeter after they got some open looks early in the game. Collin Gillespie, Eric Paschall and Phil Booth shot a combined 2-20 from behind the arc.

In the process of the game, Marvin Clark II scored his 1,000th career point across his time playing for Michigan State and St. John’s.

The win for St. John’s is another résumé builder, as the team now owns two victories against Marquette and this one against Villanova. With those three wins, St. John’s should control its own destiny regarding a trip to the NCAA Tournament.

The team still has road games against DePaul and Providence, who bested the Johnnies at home, as well as Xavier. The team’s two remaining home contests are against Seton Hall, who’s controversial ending leading to a Shavar Reynolds Jr. game-winning three at the buzzer in December is something that few St. John’s fans have forgotten, and another matchup with Xavier. Assuming there are no slip-ups, many feel the Red Storm have locked down a position to return to the Big Dance for the first time since 2015, and the first time under Chris Mullin.