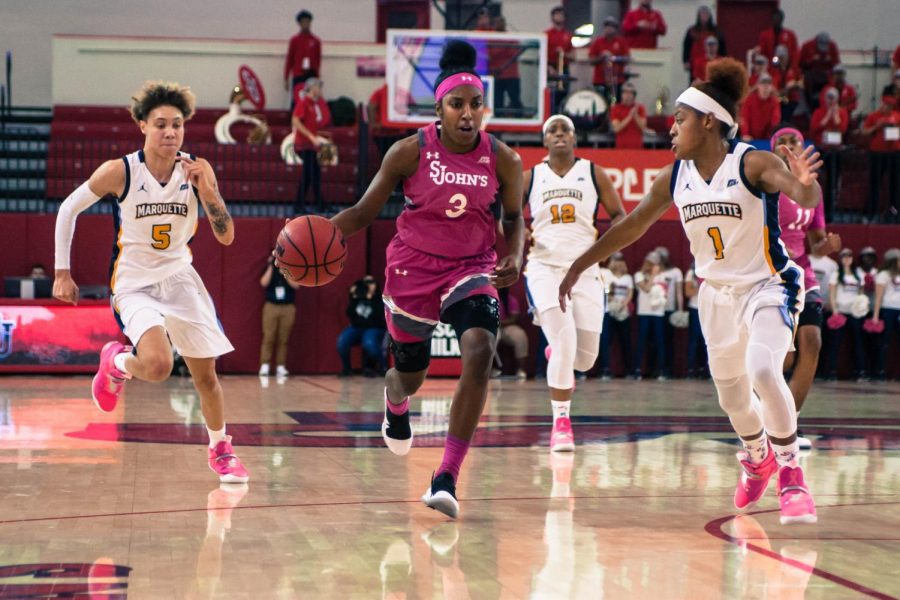 Tiana England finished with 20 points to lead the Red Storm in their upset of Marquette.

The St. John’s  Women’s Basketball team entered Friday on a three-game winning streak as they began to climb back up the Big East ladder. St. John’s had been 2-8 in conference play before the trio of wins bounced them up to 5-8 but faced an incoming weekend with games against the top two Big East opponents, Marquette and DePaul.

The Johnnies continued their winning ways on Friday night by handing then-#8 Marquette their first conference loss of the season by a final score of 81-74 in front of an energetic crowd at Carnesecca Arena.

The Johnnies endured a first quarter dominated by Marquette but rallied in the second half, outscoring the Golden Eagles 49-34 to finish the game. The 81-74 victory was the St. John’s women’s first win over a top 10 ranked opponent since 2012. Tiana England finished with 20 points, three rebounds, and six assists to go along with a steal and a block. Alisha Kebbe scored 17 while Kayla Charles dominated the paint, blocking three shots and grabbing seven boards. The Red Storm hit seven three-pointers in the game.

“I couldn’t be happier with our performance,” Head Coach Joe Tartamella said after the game. “This, in my head coaching career, is one of the biggest wins we’ve had at Carnesecca Arena.”

He noted that he was most impressed by the team’s resiliency, noting that with the way things went in the first quarter, the game could have gotten out of control quickly if not for the team’s refusal to quit.

Tartamella described England’s performance as “fearless,” as England backed up her head coach’s words after the upset.

“I feel like we can play with anyone,” England said. “Marquette is obviously a strong team, but so are we.”

There was hardly any time to celebrate the key victory, however, as they had to turn around and face a DePaul team that was second in the conference and on a three game winning streak of their own. Curteeona Brelove and Qadashah Hoppie came out strong for the Sunday afternoon affair at Madison Square Garden, but St. John’s fell to the Blue Demons, 70-62.

Similar to the Marquette game, St. John’s started off slow on the offensive end, but continued to grow into the game as things progressed. Hoppie’s continued dribble penetration in the first half allowed her teammates to find some space against DePaul’s stifling defense.

Hoppie scored 16 while Brelove recorded her fifth double-double of the season, netting 12 points and securing 11 rebounds. The Johnnies held onto a one-point lead in the fourth during a comeback effort, but only for a short moment as DePaul regained the advantage and held it for the remainder of the contest.

After the win against Marquette on Friday night, England said that the team’s biggest difference between the comeback win and the team’s other nail-biting losses was that “we got down, but we didn’t stay down.” For a team that’s been involved in a few close losses this season, seeing an impact result go their way could springboard a late season flurry.

Despite the up and down season, this team is not short on confidence. They remember how well they played against perennial powerhouse UConn, and the win against Marquette proved that the record isn’t a proper reflection of the talent on this team.

The Johnnies now sit at 13-13 overall and 6-9 in Big East play after the 1-1 weekend. They have just three games left before postseason play. The Johnnies currently sit at seventh in the Big East but could still vault up to third with a strong close to the season. The most likely scenario sees them between fourth and sixth if they can pull together two wins to finish the year. The team will head to Philadelphia to take on Villanova next Friday.