Making An Impact Off of the Court 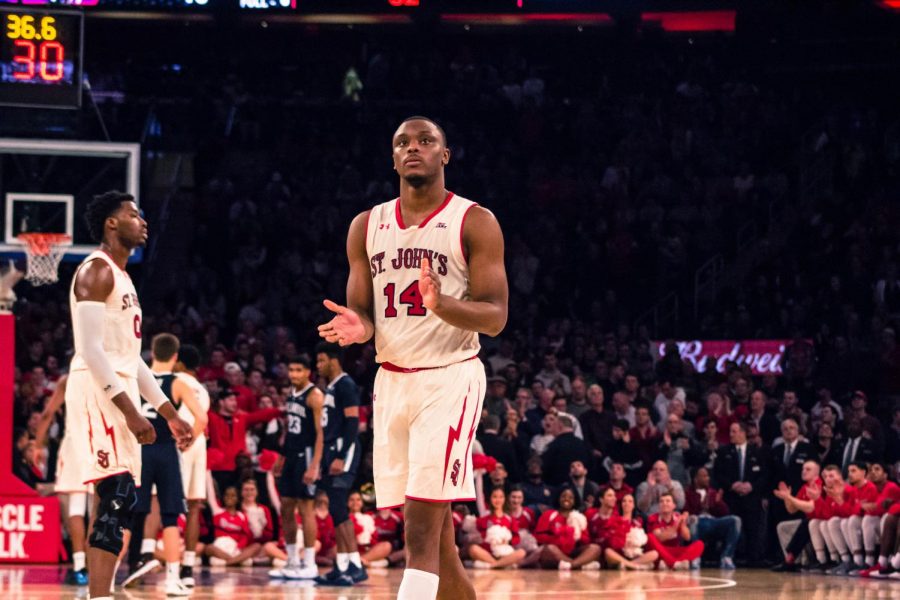 As Mustapha Heron stands in Taffner Fieldhouse at St. John’s-—87 miles from Waterbury, Conn. home—and around nine months since he committed to St. John’s, he casually describes the two places where many of his counterparts have ended up in his hometown.

The county jailhouse and the graveyard.

“Inner city things, losing friends, jail, death. I want to make sure the next generation doesn’t have to deal with the same things that I had to deal with,” Heron said.

Heron has used his closer proximity to Connecticut in order to get further involved in his community in a way that can’t be measured in any number of points, rebounds or assists.

“Basketball ends at some point for everybody. Some sooner than later,” Heron said. “Whatever you got outside of sports is who you really are as a person.”

Now playing as a redshirt junior for St. John’s, Heron began his career at Auburn University before transferring to Queens in order to be closer to his ailing mother, who has been dealing with severe complications from a concussion.

Along his side from the start has been Heron’s father, Bryan. Building up the presence of Heron’s community programs wasn’t difficult. As Mustapha notes, Bryan Heron is more than just a name in Waterbury.

“Since I’ve been two years old I’ve been seeing him in the community,” Heron said. “If you don’t know who he is, then you’re probably not from Waterbury.”

Before Mustapha Heron was even born, Bryan Heron, a former college basketball player himself at Central Connecticut State, found ways to make an impact himself.

Mustapha Heron describes his dad as a “mentor” who looked after kids coming out of jails, in foster homes and residential centers.

“Seeing him and the impact that he brings the kid, it made me want to do it,” Heron said.

But just setting up the tournaments and throwing his “MH” logo on t-shirts won’t get the job done for Heron. Transferring to St. John’s allows him to make the quick trip up the Hutchinson Parkway to make appearances at the basketball tournaments he organizes.

Heron called his most recent tournament “Shoot Hoops Not Guns,” and filled up a slate with 12 different teams. But Heron’s activist plans aren’t just revolved around gun violence.

Heron sponsors programs where children receive bookbags when they turn in book reports that are deemed quality by Heron and his father. What happens if they continue to submit more book reports? Mustapha and Bryan Heron give them pairs of sneakers.

“Everybody pretty much buys in,” Heron said. “I was a pretty big high school player in Waterbury so I think people buy into it because they used to go to the games and there’s never been a problem getting people to buy into it.”

Even though Heron and St. John’s are currently in the middle of their own season, his father continues to make sure the Heron’s name is a fixture in Waterbury.

When LeBron James opened his “I Promise” school for at-risk youths earlier this year, it struck a chord with Heron. Right now, Heron might not have to the resources to build a school, but he won’t let that stop him.

Heron has fit right in with the values of the program at St. John’s, with the team’s goals to get active in the community. The team hosts a “Dribble for the Cure” event for cancer research every year, where Heron can be seen in pictures flashing his bright smile —  of course while wearing his backwards, navy blue Yankees hat.

Earlier this month Heron and the Red Storm signed seven-year-old Long Island City native Harlem Beal, who is currently battling sarcoma, a type of cancer, to the St. John’s Basketball family. While not for the causes that Heron is fighting in Waterbury, he knows how important it is to get involved in as many ways possible.

“I think that as college athletes at a high level, people look up to us and we just have that platform that people are going to follow what we say,” Heron said.

His work after his first two seasons at Auburn earned him a spot on the All-SEC Community Service team. But he’s not interested in stopping now.

For  Heron, some of his friends’ lives were cut short. Regardless of whether his basketball career is cut short or not, he knows when the final buzzer rings it’s not about what happens within the 94 feet of the hardwood at Carnesecca Arena, Madison Square Garden or any school playground.

Heron’s Twitter biography is “203 made, 203 raised, and 203 paid.” Heron’s area code means much more than three digits used to make a phone call.