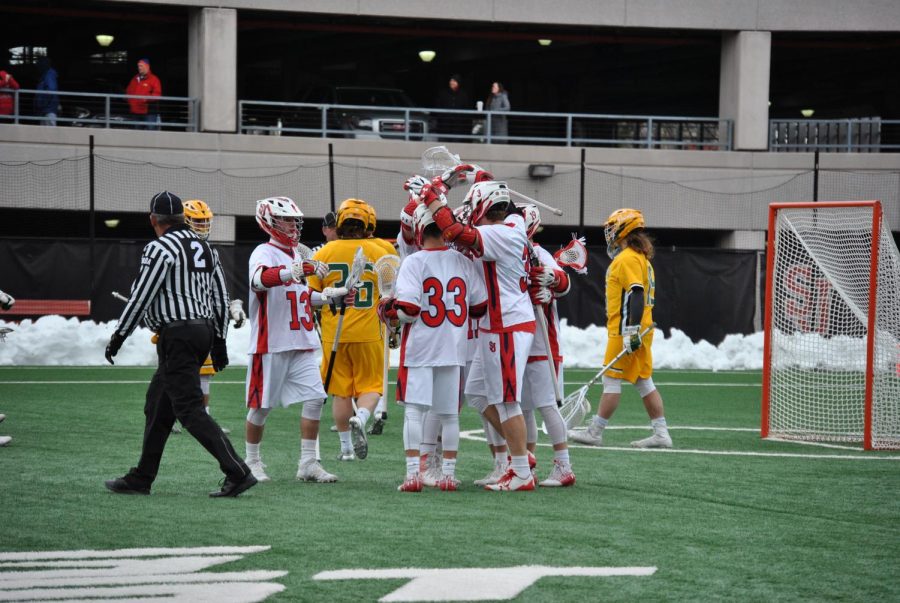 The St. John’s Men’s Lacrosse team is averaging over 14 goals per game this season.

The St. John’s Men’s Lacrosse team took on the No. 11/13 High Point University Panthers this past Saturday at Vert Stadium down in North Carolina. Going into this game 1-1 and having received votes for the Top 25 last weekend, this was a big one for the Red Storm. Despite a game filled with runs, the Red Storm were able to pick up the upset on the road after defeating the Panthers 10-9 in North Carolina on Saturday.

“We hung in there all day and ground it out until the end,” Head Coach Jason Miller  told RedStormSports.com after the game.

Just one minute into the game, senior Chris Buscemi found the back of the net. He was one of the eight Johnnies who found the scoreboard during this game. After the Panthers scored to tie the game, Declan Swartwood, unassisted, put the Red Storm back in the lead.

The second quarter was a shaky time for St. John’s both offensively and defensively. They  couldn’t seem to stop High Point, while at the same time, the back of the net seemed distant.

High Point stormed all the way back with one minute left to take a 6-4 lead. Redshirt freshman Jonathan Huber and junior Joe Madsen, both scored in the second quarter in order to limit the damage heading into halftime.

This led the Red Storm to find the back of the net three times during the third quarter, while the Panthers were only able to find it twice. In this quarter alone, junior attackman Mike Madsen got his hat trick.

The Johnnies struggled to hold the lead throughout the game, leaving them down by two  with 13:23 left in play. Mike Madsen, Huber and Joe Madsen stormed through to each score, allowing St. John’s to take the win with a score of 10-9. This win marked the Red Storm’s second-consecutive road victory of this season.

The second half allowed Luke Roediger to step in at the X, locking down their win against the Panthers. He was a great help behind the net, containing the Panthers at their score of nine  during the entire fourth quarter.

The Red Storm was successful in keeping High Point’s leading scorer, Asher Nolting, from finding the net. He scored just one point during the whole game. St. John’s kept the pressure on High Point’s players and never gave up.

The Men’s Lacrosse team will be taking on their next game here at DaSilva Memorial Field, hoping to carry on their winning record as they host the  Michigan Wolverines on March 2 at noon. Michigan is a team that’s been hovering around the Top 25 and gives the Red Storm another opportunity for a big win, this time on their home field.

St. John’s received 11 votes for the Top 25 poll after the result, but was still unable to squeak into it.

In addition to the team recognition, three members of the Red Storm lacrosse team were give weekly awards by the conference. Freshman goalie Brody Agres won Big East Freshman of the Week after he stopped 12 shots in Saturday’s win which helped keep High Point scoreless throughout most of the fourth quarter.

Coach Miller was especially happy for Agres because he saw the win as a major stepping stone for the freshman goalie.

Senior defender Aidan Marron and Joe Madsen found themselves on the Big East Weekly Honor roll. Marron was largely responsible for the quiet day for Nolting, one of the nation’s premier attackmen in the early periods of the college lacrosse season.