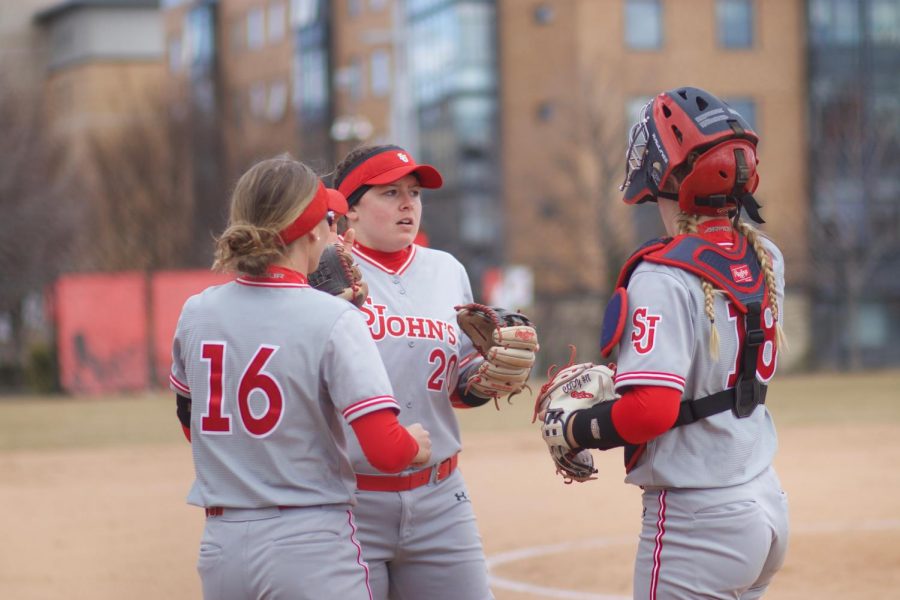 Madison Morris leads the Red Storm with a 3.59 ERA

The St. John’s University Softball team faced Hofstra University, Wagner College and College of the Holy Cross this past weekend during the St. John’s Invitational at the Red Storm Field.

The Johnnies opened their first home series of the season with a 9-3 loss to Hofstra.

Hofstra’s offense was consistent throughout the game, securing an early lead in the first inning. Courtney Scarpato rocketed an RBI single to left field, followed by outfielder Madison McKevitt’s sacrifice fly to right field to drive in their second run by Megan Giordano.

St. John’s scored their first run of the game in the second inning with a groundout by Laura Delgado, bringing Peyton Cody  home from second base. McKenzie Murray kept the second inning alive when she singled to bring home Kaitlyn Lologo.

The Pride gained four more runs in the top of the seventh, beating the Johnnies on their home turf.

But the Johnnies didn’t let the loss keep them down, as they rebounded with a 13-9 win over Wagner.

St. John’s found out where they went wrong, as they topped off a back-and-forth battle against Wagner with a win. Lologo opened up the scoring in the second inning with her second home-run of the season, while Cody doubled with a hit down the left field line, leading to Melendez’s home-run bringing in two runs.

Wagner fought back in the third, where they scored a whopping five runs. Lologo and Cody came back for the Johnnies with back-to-back base hits to start off the bottom half of the third. Melendez brought them home when she delivered a two-run single, giving the Red Storm the lead. Two more runs were scored when Ditolvo hit a home-run to left center, giving St. John’s the lead with a score of 7-5.

Wagner squeezed in two more runs in the top of the seventh just before Saric secured her third win of the season. Along with her strong pitching performance, Melendez’s six RBI tied the Softball program’s record for the most in a game.

The Red Storm continued their winning ways with a convincing 7-1 victory over Holy Cross.

Rizzi and Murray reached base in the bottom of the first with a hit by pitch and a walk. They would both later score, giving the Johnnies a 2-0 lead after one inning of softball.

St. John’s would go on to add three more in the bottom half of the third inning. Murray shortly found herself going from second to home when Rizzi homered to right field. Two batters later, Cody also homered to right field, leading the Johnnies to go into the top of the fourth with a lead of 5-0.

Gabriella Conc, of the Red Storm, singled in the bottom of the fourth and crossed home when Murray singled to left field. St. John’s continued to pile on the runs in the fifth when Rizzi singled up the middle, bringing home Gretchen Bowie, who doubled earlier that inning.

Bowie’s walk early in the bottom of the first led to a run when Rizzi and Murray’s hits advanced her around the bases.

Both the top of the first and second innings were three quick outs for the Johnnies. Saric had two strikeouts in the second inning, keeping Holy Cross from finding contact with the ball.

Bowie scored again in the bottom of the third with Rizzi’s home-run to right center, putting the Johnnies up by two. Cody and Melendez also scored later that inning after Kamryn Tiumalu doubled down the left field line.

The game remained 5-0 until the bottom of the fifth, when St. John’s scored three more runs. Cody was the first to do so when Tiumalu singled, advancing Delgado to second and Anna Freveletti, pinch-running for Melendez, to third. Finally, Bowie doubled to left field, leaving Tiumalu and Delgado to score the last two runs for St. John’s.

For the final game of the weekend, St. John’s secured their third win, 8-0.

St. John’s opened up their first home series with a win to improve their overall record to 11-13 on the season.

The St. John’s University Softball team takes a few days off this week, as they play again here at the Red Storm Field next weekend in a three-game series against Big East Conference opponent, Providence College.