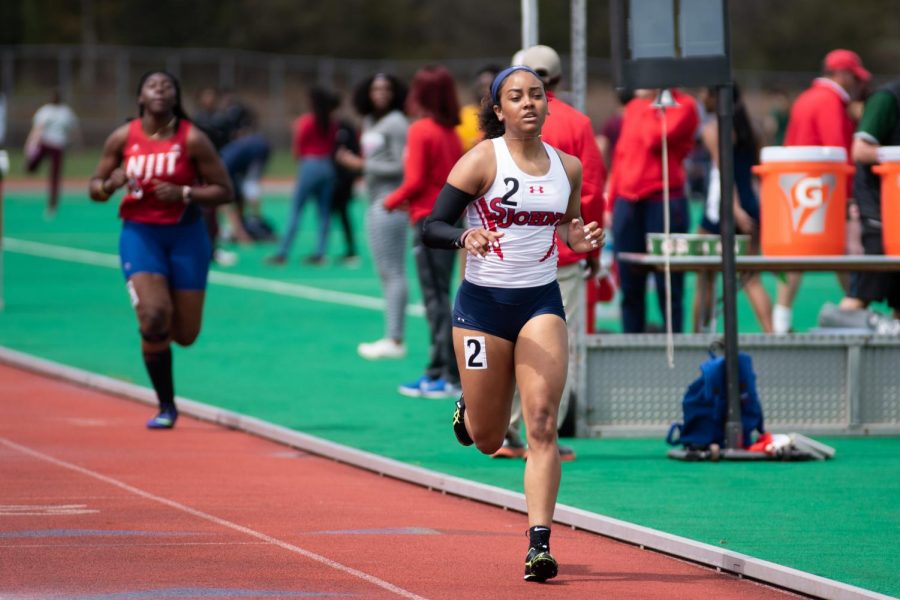 When asked how they received such results, Reyes called to attention her routine. “I practice every week, very hard, to the best of my ability at least,” she said. Once she gets to the meet, she said it’s all about “trying to stay focused.” Anderson on the other hand says when it comes to achieving success it comes down to, “just believing in myself” and “you really I have to want it.”

The 4×100 relay team has improved their time by about two seconds since the beginning of their outdoor season. “The 4×1 is very technical,” Anderson said. She shared that trust between each girl participating is key because every stride, every hand-off is important to improving time.

Both girls, as well as Coach Jim Hurt, had a lot to say about the team’s dynamic and its contribution to their stellar results.

“They help just by being there. If I’m ever feeling doubt or in my mind like ‘I can’t do this’ they’ll help me just zone back in,”Reyes said.

“My teammates, I always can rely on them, their positivity. We always cheer each other on no matter what and and it’s great. You really don’t get that experience in all other sports,” Anderson said.

“This group is an exceptional group in working together, getting along great,” Coach Hurt said.

Both Reyes and Anderson are relieved to  have achieved such great results, and they both know in order to carry these results into future meets, they must stick to their routines and keep making progress.

“They’ve had exceptional years, freshman years and now sophomore years. We always say it takes about two years to get to the point where you can really see some great things happening. Ideally, both of them are already ranked highly in the Big East and we are trying to get them to the NCAA Regional,” he said.

Hurt said that he knows where  work needs to be done to improve, yet overall he said that this year’s Track and Field team has proven themselves in the traditions of St. John’s.

One important key to success Hurt shared is, “We have to expose our team to these types of levels and we’ve completed great, so ideally that builds confidence that they can do it.”

For Anderson and Reyes, this is only the beginning to their careers here at St. John’s. They both have important individuals to look up to in motivating them through the rest of this season, as well as the rest of their times here.

Anderson, who unfortunately lost her father in 2016, says, “I promised him that I would make it to the Olympics and he’s my angel.” Reyes shares that it is her mother who motivates her a lot. “She can’t make it to most of the meets, but she’s a call away and she calms me down,” she said.

The Women’s Track and Field team  started off with a step in the right direction for their girls to make it to Regionals. They travel to Bauer Track and Field Complex at Rutgers University for the Metropolitan Outdoor Championships from April 12 to 13 to keep proving their hard work.