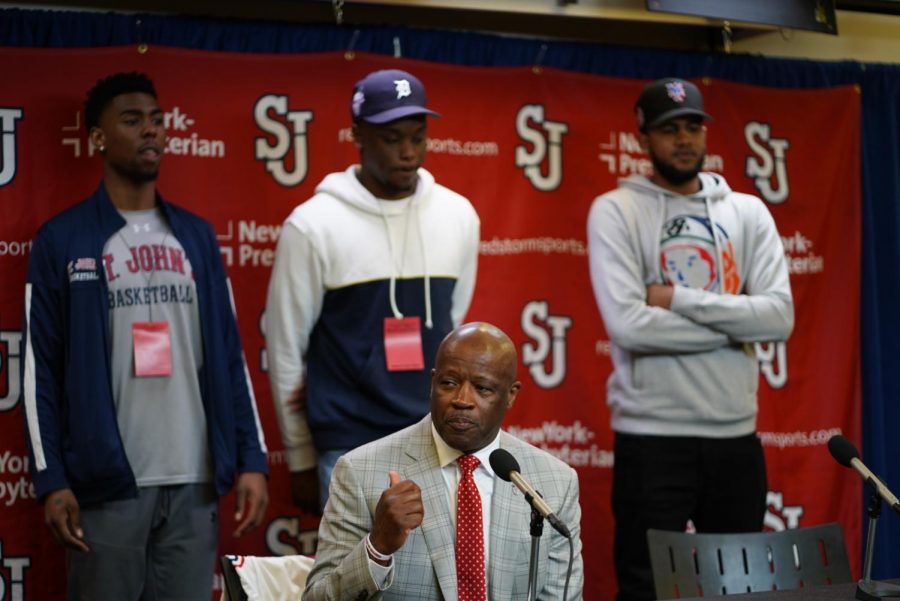 Mike Anderson (Center) asked for Eli Wright,Mustapha Heron and LJ Figueroa to join him during his introductory press conference

When Chris Mullin stepped down as head coach of the St. John’s Men’s Basketball team, St. John’s Athletic Director Mike Cragg had to act quickly, but he also had to get this next hire right. After the position was turned down by Loyola-Chicago head coach Porter Moser and Iona head coach Tim Cluess took his name out of the hat, the options looked slim. However, the Red Storm ended up with a coach who, on paper, seems more than qualified.

Mike Anderson was recently fired from the University of Arkansas after eight seasons with the Razorbacks. Anderson previously coached for Tulsa and Missouri, and amassed a career coaching record of 351-184. On April 19, Anderson was formally introduced as the Red Storm’s new coach.

Anderson brings stability and a proven pedigree to Queens. Most notably, Anderson has 12 postseason appearances, and he’s never had a losing season once in his 16 years of coaching. This is a welcomed change of pace for a St. John’s program that only has one winning season in the past four years.

While the consensus is that Anderson is a good coach, there are concerns about his coaching background. A native of Birmingham, Ala., Anderson grew up and coached in the South, and has no familiarity with the Northeast. Critics say that recruiting in New York will be a challenge for him, but what will be attractive to players is his style of play.

Anderson brings an up-tempo, attack style of basketball to St. John’s, inspired by his mentor and former head coach, Nolan Richardson. Richardson’s style was known as the, “40 minutes of hell,” which relies on pressure and in-your-face basketball. This will benefit players that  are already on the Red Storm’s roster, who played a similar style under the previous coaching regime that relied on transition scoring.

Most of all, Anderson is praised as a great individual both on and off the court. Cragg was not only looking for a qualified coach, but a true leader to guide his program.

“Coach Anderson embodies the mission and values of St. John’s, with a resolute passion and hunger for excellence,” Cragg said at a press conference.

“He will be a great leader in ensuring the success of our student-athletes both on and off the court.”

Anderson is also big on family, which he discussed a lot during his opening press conference on April 19. He wants his team to become a family and even said that he was going to have his team over his house for meals, further showing the camaraderie and supportive atmosphere he will bring to Queens.

“I am big on families, my players are my family,” Anderson said. “It has nothing to do with basketball, basketball will take care of itself.”

Anderson’s next order of business will be adding to the roster and keeping the current roster intact. Mustapha Heron was seen practicing with the team, which is a good indication that he’ll be staying with the program. Now, he has to try and keep forward LJ Figueroa, who entered his name in the transfer portal. A critique of Mullin’s staff was lack of effort in regards to  recruiting, so it was a good sign to see Anderson already on his first recruiting trip in Kansas City this past weekend.

Anderson got to work early, as he offered a scholarship to Kennedy Chandler on April 28 according to Chandler’s twitter. Chandler is a 6 -foot-1 point guard from Memphis in the class of 2021. The Red Storm also invited Chris Maidoh for an on-campus visit this week. Maidoh is a 6-foot-10 forward from Maryland.