A Storm’s Brewing At Belson Stadium 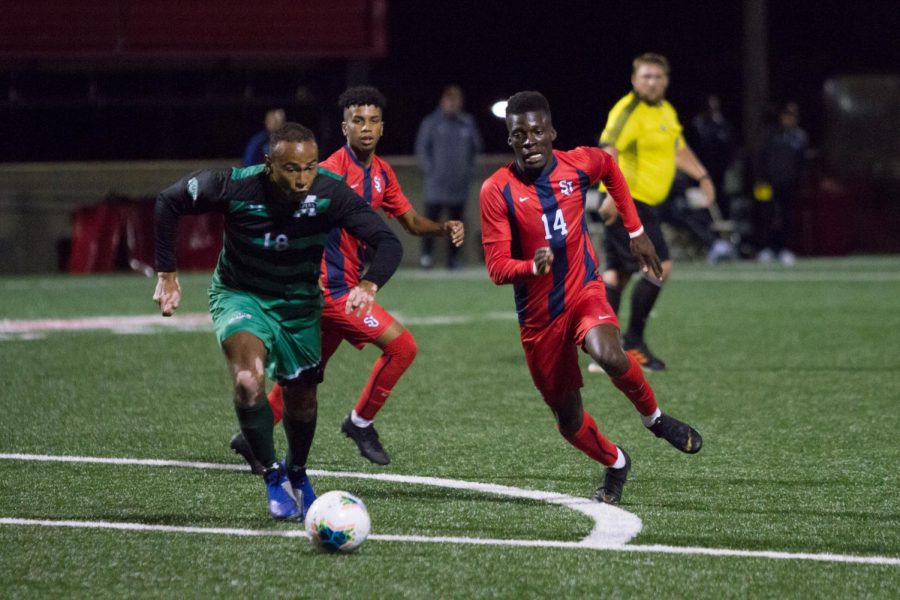 Tani Oluwasayi scored his second goal of the season Friday night against Manhattan.

There’s fun to be had with small sample sizes. Though the pool may be expanding, the St. John’s men’s soccer team hasn’t allowed a goal in a small sample of three games. In fact, they haven’t allowed a goal dating back through their exhibition schedule, totaling six games and a little over 500 minutes. This is remarkable, if not predictive. But, just to let the mind wander for a moment…

“I really don’t think about that,” Dr. David Masur, head coach and noted realist, said after the team’s 3-0 win over the Manhattan Jaspers on Friday.

For now, there are still plenty of dreams that live on. The Johnnies are 3-0-0 for the first time since 2008, which not-so-coincidentally happens to be the last time St. John’s played itself into the College Cup. They’ve already beaten a 2018 NCAA Tournament team, N.C. State, and cruised past two mid-majors, outshooting Appalachian State and Manhattan by a combined margin of 37-12. It has Coach Masur seeing traits of St. John’s winners’ past.

“We’ve got a lot of depth,” he said. “We’ve had guys not play and jump in [when others have gone down].”

The Red Storm’s depth is most notable in the goal as Junior transfer Jan Hoffelner and redshirt freshman Luka Gavran have split goalkeeping duties right down the middle. Hoffelner starts, Gavran comes in after the half. Forty-five minutes apiece, with Gavran benefitting from additional overtime minutes in the thriller over N.C. State.

The platoon isn’t for indecisiveness on the part of the coaching staff or a lack of conviction on the part of the two keepers. The reason is simple: they’re too good to sit. Through three games, they’ve successfully contended with all seven of their shots on goal.

“Jan’s a little more experienced, Luka’s got a great presence in the goal,” Masur said. “Luka really came on in the spring…and propelled himself into a position where he should be playing.”

“Both guys deserve to play, so why not play them both?” he added.

Prepared as they are to deal with them, injuries could have slowed down the surging Johnnies. An MCL twinge has limited midfielder Skage Simonsen to just 46 minutes through the first three games. Defender Johan Aquilon missed just 11 minutes of action in 2018, but didn’t make his season debut until Friday. Both midfielder Matt Forster and defender Luke Hansen “turned their ankle[s]” in the victory over Manhattan, according to Masur, and were forced to miss the entire second half.

Although the injuries to both Forester and Hansen were a tough pill to swallow, some different faces got their opportunity to shine. Josiah Crawford netted his first collegiate goal in the win over Appalachian State. Einar Lye has shown presence in the midfield. Brandon Duarte helped to set up Tani Oluwaseyi’s decisive golden goal in the N.C. State win.

Even those nicked up have come back to contribute in big ways. Oluwaseyi, hampered in the pre-season, looked agile in scoring once and chasing down loose balls against Manhattan. Simonsen uncorked a seed from the top of the 18-yard box in the same game. He’s working himself back to form, and Masur thinks the reigning Big East Freshman of the Year is close.

“I thought [Friday] night was really good,” he said. “He went in, he found people behind the defense, he scored a great goal when he got in there. I thought he added a lot to the equation.”

The Red Storm will need Simonsen and the bunch at their best once conference play opens on Sept. 20th. Unblemished as they may be now, any sort of path to destiny is a long one.

“We need to concentrate on playing soccer for 90, 110 minutes,” Masur said. “We have to play hard and well all the time.”