How Sweep It Is For Women’s Volleyball 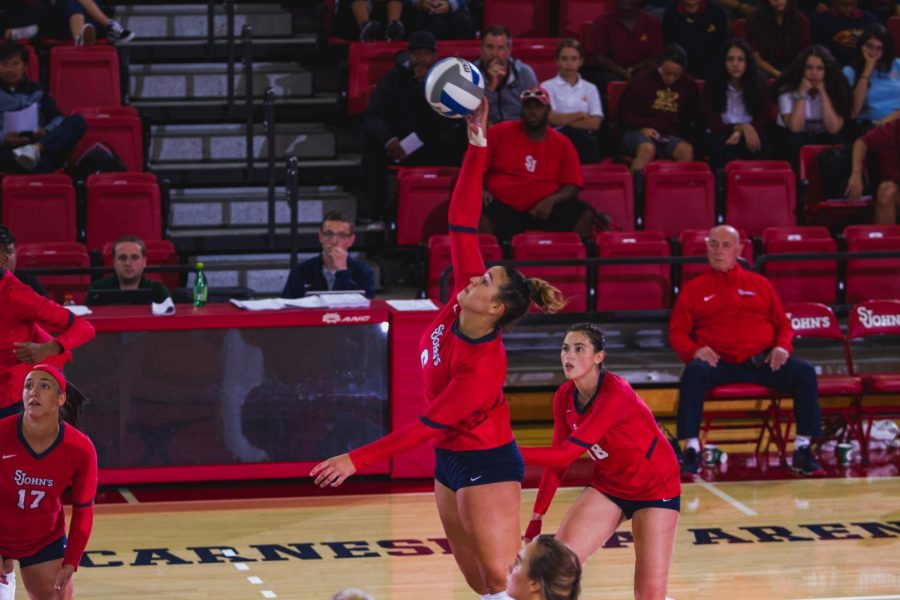 Following a gruelling weekend in Hawaii for the Hawaiian Airlines Rainbow Wahine Classic, where they faced off against two ranked opponents, and a brief road trip to NJIT where they picked up their first win of the season, the St. John’s Women’s Volleyball team was finally back home for the sixth-annual Jack Kaiser Classic at Carnesecca Arena.

The two-day tournament featuring Columbia University, Canisius University and Howard University, began on Friday as all teams played two games in the afternoon and one game on Saturday. The Red Storm’s first test was against Canisius at noon on Friday for their home opener of the 2019 season, where they downed the Golden Griffins in three straight sets. In that game, they received strong performances from senior libero Amanda Sanabia, senior setter Erica Di Maulo, and sophomore outside hitter Efrosini Alexakou, who recorded six digs and a game-high 16 kills.

The Red Storm were back in action later that day for a 5pm matchup against their Manhattan neighbors, Columbia. The Red Storm showed their dominance, winning in three-straight sets yet again. This time it was sophomore Rachelle Rastelli and junior Klara Mikelova who led the charge for the Red Storm, each recording 11 kills in the win. Di Maulo also came through once again, recording three kills and 34 assists.

Heading into their final game of the tournament on Saturday, the Red Storm had not lost a set as they faced off against Howard in hopes of winning the Jack Kaiser Classic for the fourth-straight year. As the game transpired, the Red Storm picked up right where they left off in the first game, winning again in straight sets to clinch their fourth straight tournament win in school history. In the win, the Red Storm benefited from solid performances by Alexakou and Mikelova, who each picked up 11 kills.

Shortly following the Red Storm win, awards were given to the best players of the weekend. To no one’s surprise, the Red Storm had multiple award winners as Di Maulo, Rastelli and Ariadini Kathariou were named to the All-Tournament team. The tournament MVP was given to Alexacou, who’s team-high 35 kills for the tournament was a major factor in the Red Storm’s tournament sweep.

“Efrosini brings it day-in and day-out,” St. John’s head coach Joanne Persico said after the tournament. “Even last year, she was the Rookie of the Year of the Big East and she was a regional All-American, so we’re really proud of Efro.”

When Alexacou was asked about winning the tournament MVP, the 6-foot-1 outside hitter from Greece was humble, saying, “I got the MVP [award] because of the team.”

“We were coming off of a long weekend away,” Perisco said about coming into the tournament after a tough stretch of games. “I like the fact that we were able to compete and win, even though we knew we had a long ten days.”

The Red Storm were able to win the tournament in front of Jack Kaiser, who watched both days of the tournament that bears his name in the stands of Carnesecca Arena.

“[Kaiser] epitomizes our St. John’s mission,” Perisco said when asked about Kaiser. “Whenever he’s in the building rooting for the Johnnies, we want to make him proud.”

The Red Storm will only have a few days to celebrate their win as they will head to Hofstra University on Tuesday for a 7pm matchup against the Pride. They are 4-4 in program history against the Pride and lost last season at home in straight sets.

“Winning brings people together, winning is why we show up, we show up to win,” Perisco said about picking up three wins heading into Hofstra on Tuesday. “We know we have a big match, we know that we’re the underdogs going into that match so we’re gonna try to upset them.”

With Big East play looming on the horizon, the Red Storm are fully aware that their tough schedule early in the season will prepare them for what is yet to come.

“We are practicing really hard,” Alexecou said. “We want to reach our goal this year, we want to bring that ring to Carnesecca Arena and New York City, and we really deserve that.”