Meet The Saving Graces For The Johnnies 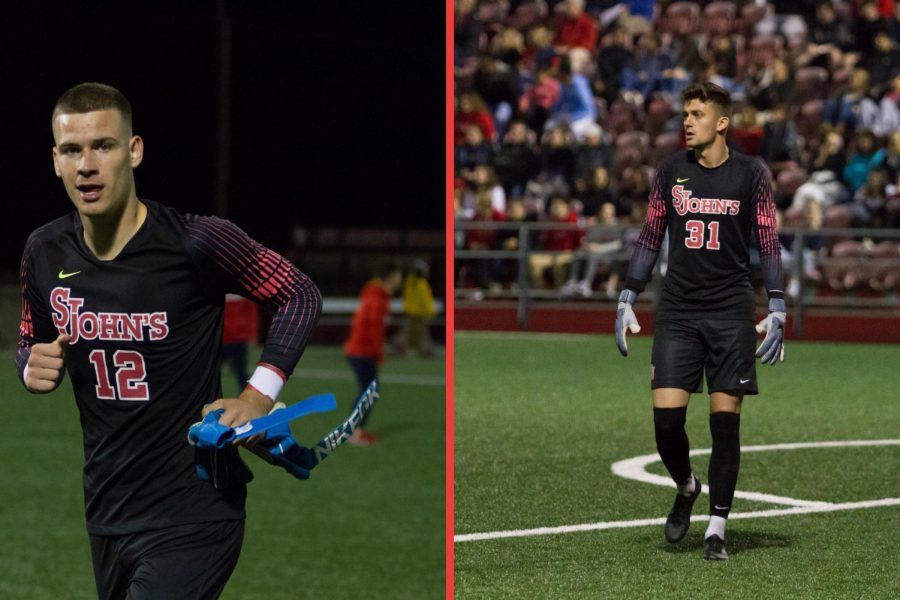 The St. John’s Men’s Soccer team’s goalkeepers Jan Hoffelner and Luka Gavran have had an impeccable start to the 2019 season. In the first six games— including three exhibition games — neither men let in a goal from the opposing team.

Gavran, sophomore goalkeeper, came to St. John’s from Hamilton, Ontario. He believes the history of the soccer program at this university drew him in. He was ready to face the Big East Conference. In fact, this eagerness to play has truly shown in the first few games during this season.

In his freshman year at St. John’s, Gavran found that having an upperclassman goalkeeper to look up to truly motivated him. “I learned from Lenny, who played here all four years,” Gavran states, and “seeing how he handles game experiences and college level was really good”.

Carrying all he learned into his sophomore year, Gavran found that in the preseason the team went through more practices and workouts. He feels as though they felt prepared and in shape to go for this season. “As a team,” Gavran states, “we stuck together and kept our core group together.”

Hoffelner, junior goalkeeper, came to St. John’s from Frankfurt a.M., Germany. St. John’s has provided Hoffelner with an opportunity to play high level soccer and work toward a degree, which is something schools in Germany do not offer.

As an upperclassman, Hoffelner finds it important to ensure that all of the members of the team are in the same boat. “You want to create a culture on the team,” Hoffelner says.

Consequently, this culture Hoffelner seeks to find started to form right in preseason workouts. “The newcomers gave us what we were missing last year,” Hoffelner says, and this is important change to the culture of the men’s team.

In looking at the season’s record thus far, both goalkeepers clearly have a connection. Both Gavran and Hoffelner find their relationship not only with the team, but with each other to be significant in their performances.

Hoffelner shares, “We have a nice relationship, Luka and I, we push each other in practice.” Spectators of the game versus Iona University could clearly see this bond between Gavran and Luka. Right at the end of the game, they met to congratulate the other on good performances in the net.

Both goalkeepers not only gave credit to each other, but also the team and coaches. Gavran said, “Our chemistry with the backline is very good. They make our job a little easier.”

It shows that the performances by the goalkeepers are not just individual successes, but also those of the whole team. The team’s goal is to improve from last year. They have the confidence and strength to push past everyone’s doubts of making the playoffs.

Continuing with this, Hoffelner highlights their win versus North Carolina State. “Since then, it has really motivated each other,” he says, “and our goal is definitely to go into the Big East without a loss.”

Although Iona was able to score against St. John’s in last Tuesday night’s game at Belson Stadium, the Men’s Soccer Team remains undefeated and ranked Number 9 in the nation according to the United Soccer Coaches Poll.

“We are hungry. We wanna do more. We are just hype right now. We are happy,” Hoffelner shares.

Fans can support the St. John’s Men’s Soccer Team as they open up Big East play on Friday night as Xavier comes to Queens for a 7pm matchup at Belson Stadium.