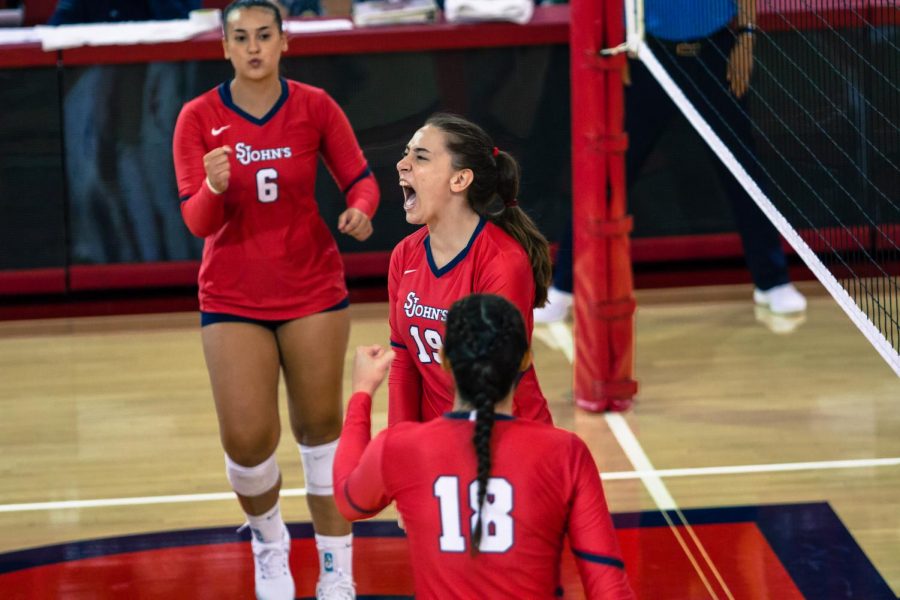 Ariadni Kathariou played in all nine sets at the Jack Kaiser Classic, recording 10 total blocks throughout the tournament.

It’s not hard to find talent in New York City. It’s usually within a radius of a skip, hop, and 4,800 miles.

“We want the best players who want to come to St. John’s,” said Head Volleyball Coach Joanne Persico. “New York City is a melting pot, and we like to think of our program as a melting pot of its own.”

Recruiting racks up the frequent flyer miles for the volleyball coaching staff. On the roster are players from Serbia, Italy, Germany, Czech Republic, Colombia, and a faraway place called Maryland. Of the six Americans on the roster, two come from Hawaii.

Coach Persico says the distance means infrequent looks at foreign recruits. While she might get to see one game per week for a recruit from Queens, she’s lucky to get more than a handful in another country.

It hasn’t diminished her eye for talent. Her lead setter and server, Erica Di Maulo, is an Italian native. Her leading blocker and attacker, fresh off appearances on the Jack Kaiser Classic all-tournament team, both hail from the same city in Greece.

Greece isn’t a traditional volleyball power. The men’s and women’s national teams have each appeared in the Olympics just once, when Athens hosted the games in 2004. But Thessaloniki, located in the northern region of Macedonia, has been something of a hotbed as far as St. John’s is concerned. Both Efrosini Alexakou and Ariadni Kathariou, sophomores from Greece’s second-largest city, have established themselves as forces on both sides of the ball.

Alexakou leads with power. Only four Big East players had more kills in her freshman season. But she’s not one-dimensional. She was fourteenth among all conference competitors in digs, and rode her outstanding debut season to Big East Freshman of the Year recognition and a spot on the all-conference first team.

“She always wants the ball in pressure situations,” Persico said. “She’s a physical, offensive minded player and a great leader.”

Her encore has proved much of the same. Though her hitting percentage may be down slightly, Alexakou seems to be hitting her stride as the team presses on toward conference play. Besides her earning the Jack Kaiser Classic MVP award in St. John’s fourth straight win at the event, she registered 19 kills on 31 attempts in a rout of Stony Brook over the weekend at Seminole Invitational. Though the Red Storm dropped the finale to Florida State, Alexakou did her part with 15 kills and a .270 hitting percentage.

In theme with finding their stride, the thus far less distinguished Kathariou is starting to carve out a regular spot up front for the Johnnies. Listed as an inch over six feet, the middle blocker leads the team with 28 total blocks in heightened playing time this season. She played in just 77 sets with 37 total blocks in her freshman season.

Her breakout came at the Kaiser Classic. Persico trusting her to play in all nine sets, Kathariou tortured opposing hitters to the tune of 10 total blocks in the all-tournament performance. She added another block and 5 kills in a rout of Stony Brook this past weekend at the Seminole.

She, along with the rest of the Johnnies, will look toward the conference schedule to get keep up their jumpstarted season. St. John’s didn’t lose a set in the Kaiser Classic, so far in their only three home games of the year. The conference schedule will bring more home cooking at Carnesecca.