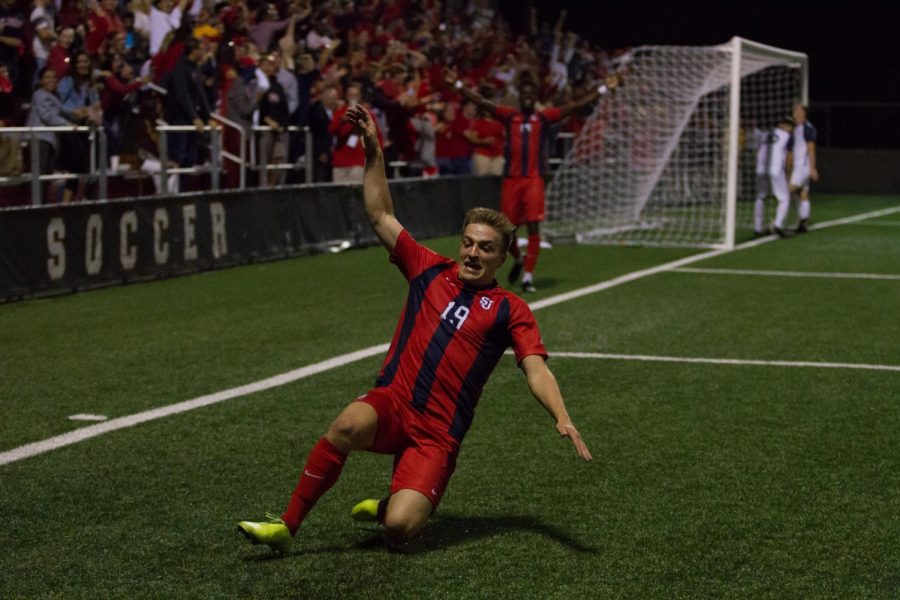 Niko Petridis scored two goals in the Red Storm's 3-1 win over No. 19 Xavier.

The buzz surrounding the St. John’s Men’s Soccer team this week was palpable as the Red Storm defeated Columbia University on Monday to go 6-0-0 on the season, which is the best start in program history, skyrocketing them to No. 9 in the nation. The  5-1 win over the Lion’s was a milestone for the Red Storm in a season that is just in its infancy. As the Red Storm enjoyed their reign as kings of St. John’s for the remainder of the week, one thing was still on their mind, getting a win on Friday at home against No. 19 Xavier.

As the sun set on the eastern seaboard, fans were beginning to file into Belson Stadium for the Big East opener of their beloved Red Storm. By the time kickoff came around, much of the grandstands opposite the benches at Belson were just about filled, as well as the student section, which stood as a testament to how successful the Red Storm have been this season.

Just 13 minutes into the contest, the Red Storm faced some adversity as Xavier’s Samson Sergi sent a crisp pass to Karsen Henderlong who flicked it in midair, past a diving Luka Gavran to give Xavier a 1-0 lead early on, which they would take heading into the locker room at the half. The Red Storm now found themselves in unfamiliar territory. Throughout six regular season games and three pre season games, the Red Storm had not found themselves trailing, but as the old saying goes, there’s a first time for everything.

“You’re always uneasy,” St. John’s head coach Dr. Dave Masur said while reflecting on the 1-0 pickle his team found themselves in early on. “We knew that if we kept plugging away that things would hopefully go our way.”

The Red Storm took the field in the first half determined not to surrender at the hands of the Musketeer’s. In the 57th minute, the Red Storm found the back of the net as Brandon Duarte thanks to perfectly placed ball off of a freekick from Niko Petridis that Duarte headed in for his first goal of the season. With the goal, Duarte became the 10th different player to score a goal for the Red Storm this season, which shows how much depth the Red Storm have.

Nearly twelve minutes later the Red Storm would find the back of the net again as Petridis, coming up with a steal in Xavier territory and then launching a rocket from just outside the box, tgave the Red Storm a 2-1 lead, sending the boisterous Belson crowd into a frenzy.

“Honestly I knew knew that the team just needed it [the goal],” Petridis said. “We knew that we still had it in us to come back.”

Petridis was not done yet as he would show off his speed in the 86th minute, sprinting past the Xavier defenders all the way from his own end and capping it off with his fourth goal of the season, giving the Red Storm a 3-1 win and eventually the Red Storm’s seventh victory on the season.

“Honestly I knew knew that the team just needed it [the goal],” Petridis said. “We knew that we still had it in us to come back.”

With the win, the Red Storm are now 7-0-0 on the season, which has never been done in program history. Although they had not faced a lot of adversity on what has been a historic run, games like this are what will strengthen the Red Storm.

“Our team’s gonna have to continue to learn to play when we’re down, to face adversity and to have character,” Masur said. “Today’s a good example of that and it was nice to see us come out on top.”

The Red Storm also received a major boost from the crowd at Belson Stadium, which was the largest this season by far.

“They [the fans] were unbelievable today, right from the start of the whistle we could hear them,’ Petridis said. “They [the fans] deserve it so we’re trying to give them everything we can and we hope that they can continue to come throughout the year to support us.”

Up next for the Red Storm a roadtrip to College Park, Maryland to face off against the defending national champions, the No. 25 Maryland University Terrapins. Although this will be a tough test for the Red Storm, the coaching staff has done a great job preparing them for tests like these.

“I think that’s been one of the best things we’ve done this year [preparing for games],” Petridis said. “It’s gonna be a very, very tough game, but I wouldn’t count us out.”