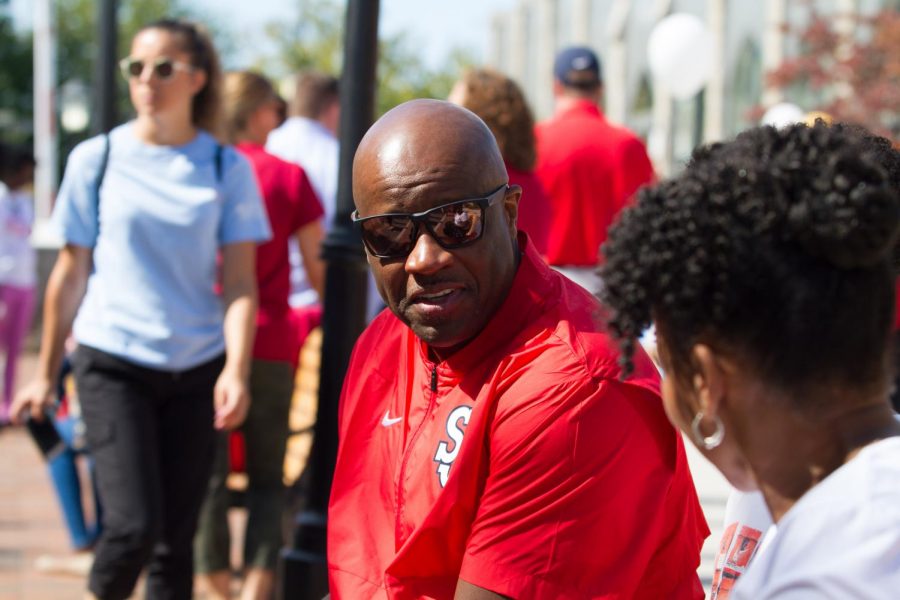 Mike Anderson interacting with fans at the ninth annual Dribble for the Cure event.

It was another beautiful September morning in Queens, N.Y. as St. John’s Men’s Basketball Coach Mike Anderson appeared from the glass doors of Carnesecca Arena, checking out the crowd that had gathered for the ninth annual Dribble for the Cure event.

Anderson, wearing a red St. John’s pullover and slick black Nike sunglasses, is still relatively new to the New York area, having just received the head coaching job in May. You wouldn’t be able to tell by the way he engaged with the hundreds who were on hand to raise money and awareness for the Pediatric Cancer Research Foundation. In fact, it has been events like these that have allowed Anderson, born and raised in Alabama, to feel at home in the Empire State.

“This is where we live at,” Anderson stated when talking about giving back to the community. “Whenever events take place that we can be there, we’re gonna be there.”

It has been this attitude that has played an intricate role in not only establishing a relationship with the fans and alumni of St. John’s, but completely changing the culture. After former St. John’s star turned coach Chris Mullin stepped down unexpectedly as head coach in late April of this year, the university was scrambling to find a replacement that would not only bring a winning culture to St. John’s, but also a sense of community.

“We’re in the kid business, and so what that means for St. John’s could be different for some other school, and that’s fine,” St. John’s Athletic Director Mike Cragg said during Anderson’s introductory press conference at Madison Square Garden in April. “But for St. John’s that means we need a coach that’s committed to them, that’s gonna work hard and be representative of St. John’s, a hard working, blue collar, get it done, representation and leader for our University.”

In just five months, Anderson has fit the description of what Cragg was looking for when Mullin stepped down. Although Anderson has not coached a game at St. John’s, he has demonstrated his leadership and willingness to bring his team to a higher level in various ways. Whether it be recruiting elite talent or engaging with the community, Anderson has proven that Cragg’s original intuition was correct.

Dribble for the Cure is on a list of many when it comes to examples of Anderson engaging with the community. In his first week at St. John’s, Anderson took a stroll around campus and engaged with the student body. Over the summer, Anderson also hosted Taste of St. John’s, where he invited the St. John’s community to join him at Carnesecca Arena for a food exposition of some of the best cuisine in the New York area.

With events like these, Anderson has showed off his charming demeanor. For example at Dribble for the Cure, Anderson sat down next to a mother and her son and immediately started talking to them, smiling and laughing just minutes before he had to go on stage and address the rest of the crowd on hand. It is simple, yet meaningful interactions like these that have made Anderson so popular so quickly.

Anderson started his speech at Dribble for the Cure by saying, “Well, it’s my first [Dribble for the Cure] but it won’t be my last.” Although he had said just a few words, the crowd had already been won over, giving him a round of applause.

“It’s funny the more I’m here, the more I just really start to have an affection for St. John’s,” he continued. “Not only this university, but what it stands for.”

The affection with St. John’s seems to be mutual, as fans have gravitated toward him for some of the same reasons he has gravitated toward the university. It is safe to say that giving back to the community is up there in terms of Anderson’s values. Come November, the St. John’s community will be ready to give him and his team the needed support they deserve as a result of the groundwork that was established off the court.