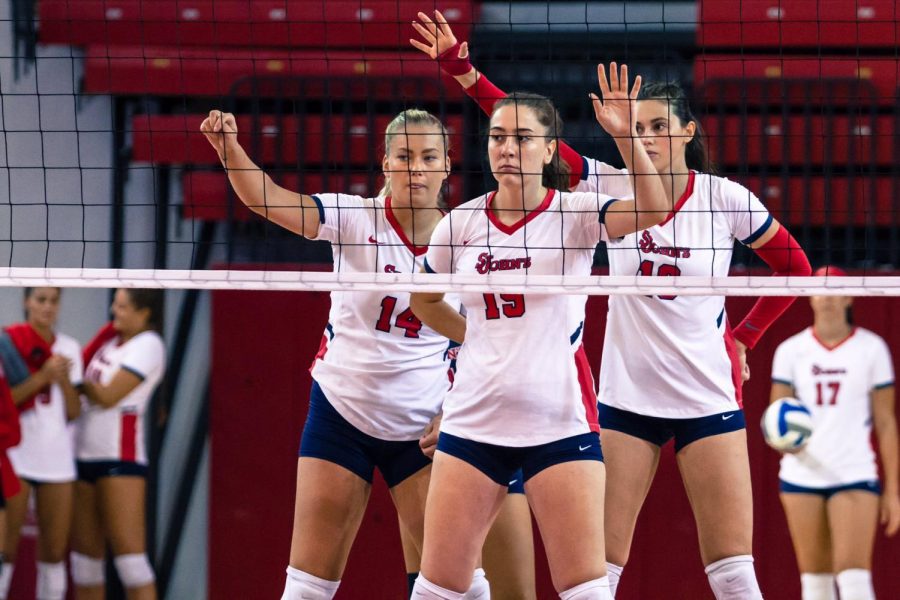 After opening up Big East play on the road against DePaul and Marquette, St. John's will return home to play #14 Creighton.

After going through a gauntlet of a non-conference schedule that featured three ranked teams and nine 2018 NCAA tournament teams, the Johnnies were primed to face some heated competition in the Big East play.

The Red Storm finished non-conference play with a record of 8-5, with four of those losses coming against top-25 ranked opponents in road matches. The team was able to cap off non-conference play with a pair of four-set victories in the Hempstead Invitational two weeks ago, beating Duke University and upsetting then-No. 14th ranked Oregon University to earn their first victory against a nationally ranked opponent in 6 years.

“It was exciting to face top-20 teams in preseason. It tested our team to play at a high level and we all grew a lot during this short period of time. We’re going into Big East play ready to battle against all of the teams,” says senior setter Erica di Maulo, who is just 50 assists away from reaching third on the Johnnies’ all-time assist list.

The team benefited from tenacious performances from every one of their players during this tough stretch of games. Among them is sophomore Efronsi Alexakou, who registered 28 kills at a .460 hitting percentage in the upset victory over Oregon, with her efforts earning Big East Offensive Player of the Week honors. Right side hitter Rachele Rastelli also chipped in, recording double-digit totals in kills in each of the Red Storm’s games against Oregon and Duke, while Erica di Maulo nearly eclipsed Duke’s team assist total all by herself in the Red Storm’s commanding victory over the Blue Devils.

What is most striking about this 2019-20 team isn’t their upset victories over ranked opponents, or their strong finish to one of the most difficult non-conference schedules in the nation, but how this diverse group of players coming from different corners of the world have coalesced with such ease, and translated their unlikely chemistry into early success.

“We fight hard and we love to compete on the biggest of stages,” says longtime head coach Joanne Persico, “Klara [Mikelova], Tiziana [Baumrokova], Maria [Palacios] and Illiana [Rodriguez] have contributed well and are adjusting to a new city, a new school and a new team in the fastest paced place in the world.”

The team began conference play this past weekend by splitting a two-game road trip in the Midwest, beating DePaul University in four sets on Friday, September 27th in Chicago, then losing to 10th ranked Marquette University in Milwaukee the very next night. Alexakou put up a game-high of 23 kills in the Red Storm’s victory over DePaul, while Di Maulo notched 38 assists in each of these first two conference games. The Red Storm hope to get back on track, as they play a tough No. 14th ranked Creighton University squad on Friday, October 4th at Carnesecca Arena.

Even with this pivotal game looming, the Red Storm aren’t losing any focus or poise as they trek through a new Big East season. “Obviously, we know the Big East teams better than the ones we faced before the regular season,” says di Maulo “All the teams in the Big East are very competitive, and we have to work game by game to beat them.”