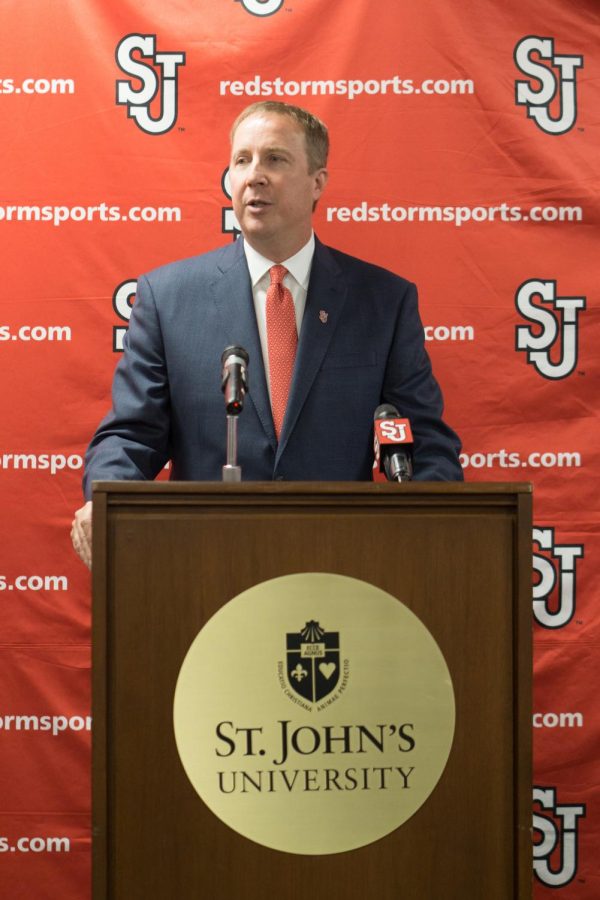 St. John's Athletic Director Mike Craig said, "I'm definitely in favor of trying to figure this out," when asked about California SB-206.

St. John’s athletic director Mike Cragg said he’s in favor of student-athletes “being able to have the best possible experience and opportunities,” but he stopped short of endorsing the current wave of proposed legislation to compensate athletes.

“I definitely am in favor of trying to figure this out, but I’ve yet to see anybody actually come up with a practical plan,” Cragg said at Big East Media Day at Madison Square Garden on Oct. 10.

The California bill has served as a catalyst for other state’s to create their own legislation surrounding compensation for student athletes. In New York, a new bill is currently in the Senate Committee phase.

Cragg said he’s confident that the California decision — the only one that’s made its way into a law — will not impact St. John’s because it will go into effect in 2023.

“We’re not going to end up with any one state deciding the rules,” he said. “It was a law that was set for 2023, a lot’s going to happen between now and then.”

Cragg declined to offer a specific alternative to compensate student athletes in ways they are not now, saying he’s waiting for Big East commissioner Val Ackerman to release a report on where the conference sees the future of the NCAA headed.

“Honestly we’re all waiting for Val’s group to kind of give its preliminary report,” Cragg said. Later on Cragg added, “We as practitioners are waiting kind of [for] higher bodies to start making recommendations.”

Ackerman did not reference this topic during her address to reporters at Big East Media Day. The head coaches and a handful of players from each conference school were also in attendance.

“You know I wish I had the magic ball,” Cragg said. “Where it’s going to go is, it’s going to change everything, there’s no question about that.

“So hopefully for the betterment of the student athletes and the ones that have opportunity in their name [being] licensed — I don’t know of people against that, it’s more about what’s practical to do that and to still have amateurism and still have a form of college athletics. But that’s tough and I don’t have the answer to that.”

New York was the second state to follow California in the years-long debate over how to compensate student athletes.

New York State Senator Kevin Parker introduced a bill last month — the New York Collegiate Compensation Act — calling for student athletes to be compensated for the use of their name, image or likeness, and athletes can also legally obtain agents.

The bill also proposes that schools in New York take out 15 percent of their revenue from tickets, merchandising and investments. That money is then shared evenly with student athletes while also creating an injury insurance fund for them, too.

Meanwhile schools are in a holding pattern. Administrators await a plan of action from either the NCAA or their conference and are left to ponder the possible ramifications on their schools.

Although Cragg acknowledged he has familiarized himself with the various bills that have been introduced, he believes that they are not practical. He also did not have a vision for where they may end up in the future.

He declined to speculate whether being in a major media market would benefit the program if and when the day comes where student athletes can make money off their names.

“We have a great opportunity, we are in a great stage, we use that stage to the best of being able to support all of our student athletes,” Cragg said. “But it doesn’t make us any above anyone.”

For now business continues as usual in the world of college athletics. With California SB-206 being put into action in 2023, the NCAA and its commissioners will have time to come up with a plan to handle the legislation that was brought forward in California, Florida and New York, as well as the potential surge of states that may follow suit. As a result, Cragg does not know what this could mean for St. John’s in the future, since the NCAA is in the early stages of strategizing.

“I haven’t really studied it as far as what does it mean for us because I don’t believe it means anything for us at this stage,” Cragg said. “The day it does mean something for us, then you know like anything else, you figure it out and apply it to real life.