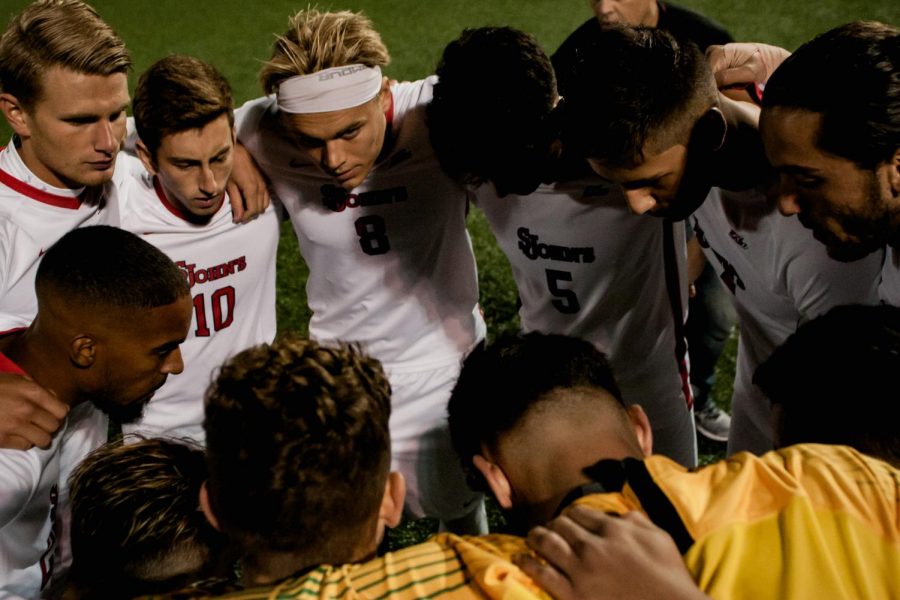 The Men’s Soccer team churned out yet another successful week at Belson Stadium as they took down Temple on Tuesday, after a late-match goal from Tani Oluwaseyi and then took Villanova to task on Saturday with a 4-0 victory.

On Tuesday, the Red Storm nearly grabbed an early advantage on the Owls in the 16th minute when Einar Lye nailed a shot from Brandon Duarte but the goal was called off due to an offside flag. The goalie duo of Jan Hoffelner and Luke Gavran, combined for seven saves which set a season-high for St. John’s and stopped all of Temple’s shots on goal. They tallied their third consecutive shutout and seventh on the season.

Both teams’ scorelessness continued until the 66th minute when Rafael Bustamente ripped the ball away from an Owl, advanced up the field and found Oluwaseyi who sunk the game-winner. Coming off the honor of receiving Big East Offensive Player of the Week the day before, Oluwaseyi secured his seventh goal of the season with that shot.

“I thought we started out really well for the first 15-20 minutes and then Temple kind of lifted their intensity, made a lot of subs and made the game a bit physical and chaotic for us.  We didn’t always respond well. We need to be able to play with more efficiency and more positional savvy to be able to overcome that, but we worked really hard and we’re excited to get a win against a really tough team,” St. John’s Head Coach Dr Dave Masur following the win.

On Saturday, the team continued their dominance at home when they racked up four goals and shut the Wildcats out. Skage Simonsen headed the first goal in off a corner kick in the 35th minute. Freshman Jared Juleau tallied his first career collegiate goal later on and Einar Lye added the final two goals late in the second half to wrap up one of St. John’s most impressive wins of the season.

Masur stressed the importance of the Big East victory saying, “We’re happy to get a Big East win. It’s great for the guys and great for a lot of different people to get in the game and really make contributions.”

The Johnnies entered the week at No. 10 nationally but exited No. 2, now sitting beneath only Virginia in the NCAA’s first official RPI rankings released on Monday. They have now allowed only five goals in 1,111 minutes of play in 2019, a testament to their defense and exceptional goalkeeping from Gavran and Hoffelner.

The wins improved them to 11-1-0 on the year and 4-0 in the Big East. The Red Storm have not sat at a record as impressive since their  21-game win streak in 1993. They currently rank first in the Big East, trailed by Georgetown.

Along with the No. 2 rank honor, Oluwaseyi has been named to the Big East Weekly Honor Roll, while Brandon Duarte earned Big East Defensive Player of the Week. Duarte is St. John’s fourth Big East DPOW this season.

The Red Storm will travel to Omaha this week to duel Creighton on Saturday. You can catch it at 8:00P.M. on GoCreighton.com