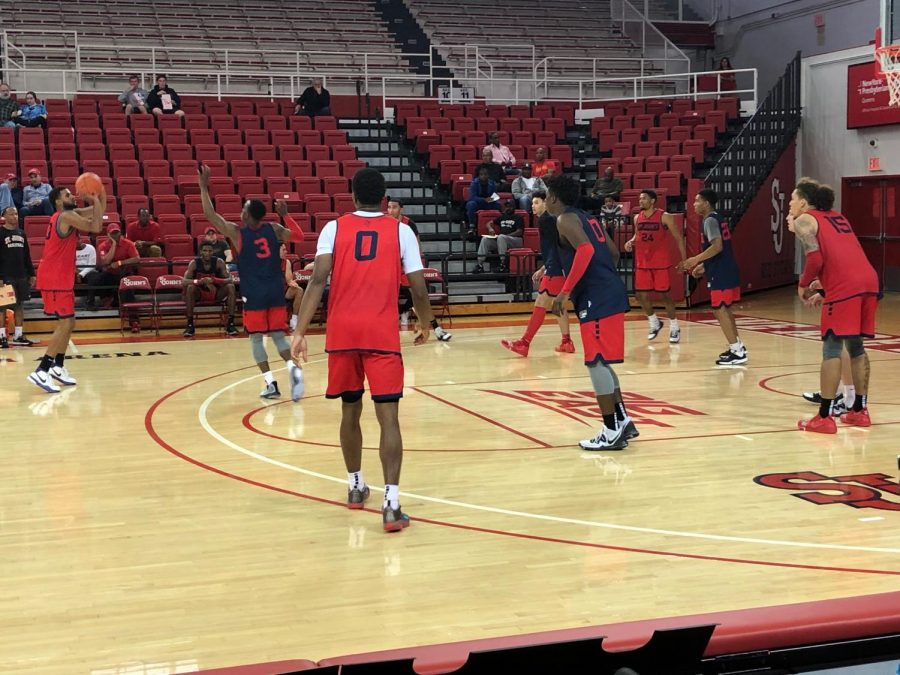 St. John's Men's Basketball practiced in front of season ticket holders this past weekend at Carnesecca.

The St. John’s men’s basketball team hosted an open practice exclusive to season ticket holders of this upcoming season on Sunday afternoon. Fans were greeted with a performance from the school band as well as the cheerleading and dance teams at the steps of Carnesecca Arena. After practice, the team held a meet and greet with the players, allowing fans to get some of the players’ autographs. Roughly 250 season ticket holders, young-and-old, came out to support the team during their open practice.

Among the dedicated fans in attendance was Tom Principe, a St. John’s law school alum and season ticket holder for 47 years.

“When I was in high school and I saw the games at the Garden when [Lou] Carnesecca was coaching the team in his first years here, I knew I had to go to St. John’s,” says the Flushing native, “The environment and fan loyalty are second to none here, and it’s great to see the team reward the season ticket holders.”

Many fans were excited to see first year head coach Mike Anderson direct his team under his high-pressure defensive gameplan that he has used over his 18-year coaching career. nine-year season ticket holder Dan LaParco traveled from Stamford, CT to watch the practice, and he was very impressed with Anderson’s style of coaching.

“I love their intensity and they look like they could run the other teams out of the gym,” says LaParco, “Just from watching, you can see how they give it 110% on every play they make.”

Anderson isn’t the only first-year hiring looking to return the St. John’s brand to national relevance. Athletic Director Mike Cragg was also in attendance, interacting with the fans and watching the practice from courtside.

Since being hired last September after 30 years of overseeing plenty of national success as a senior athletics administrator at Duke, Cragg has made fan involvement a top priority. This year, he is trying to increase student engagement with the St. John’s athletic teams, particularly the men’s basketball team. Starting this season, students can go to any men’s basketball game at Carnesecca Arena for free, and students have received a hefty discount on season ticket prices for games at Madison Square Garden.

“The fans and students are a vital part of any successful basketball program. No program is successful without great fans, and we already have a great fanbase,” says Cragg;.“It’s why I’m also excited about the hard-nosed style of play, to me that’s what St. John’s alumni and the community is about: hard working people. Success will be rewarded with hard work.”

The festivities aren’t over for the basketball team this week, as the men’s and women’s basketball teams will be a part of the Red Storm Tip-Off this Friday, Oct. 18. This event will feature free giveaways, team scrimmages, and a guest performance by rapper Juice WRLD.