Tani Oluwaseyi Has Found His Confidence In 2019 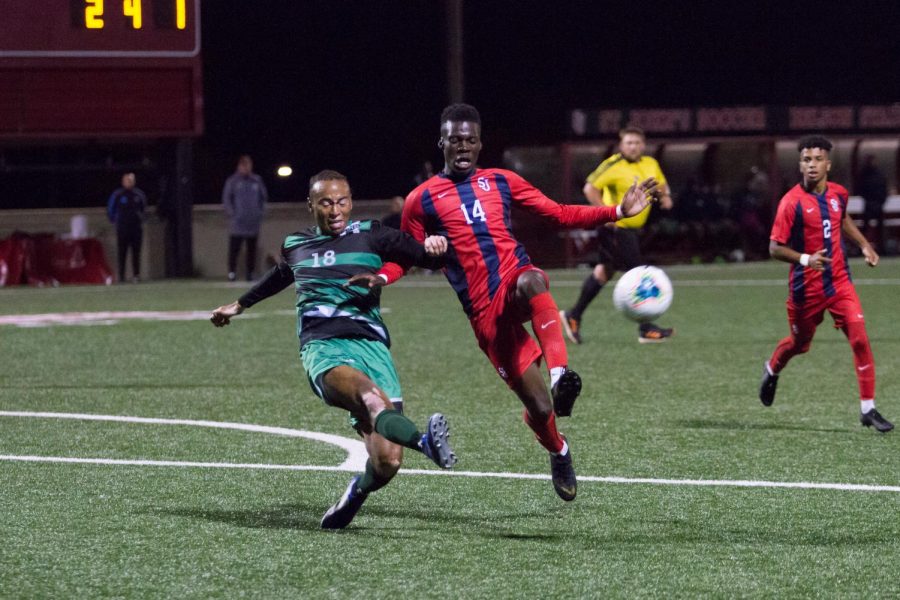 Tani Oluwaseyi has had a successful sophomore campaign as he is tied for most goals scored this year by a Red Storm player.

The St. John’s Red Storm didn’t have the best of seasons last year. However, one of the lone bright spots from last year has taken a huge step forward this season — and that is Tani Oluwaseyi.

Oluwaseyi is currently tied for most goals scored this season with four and has most recently scored the game lone goal in the Red Storm’s victory against the Butler Bulldogs a few weeks ago.  Oluwaseyi is originally from Nigeria, where he lived for 10 years before his family relocated to Mississauga, Ontario. Moving to a completely new country and continent is hard for anyone; however, Oluwaseyi understands that his family’s move to Canada was for the best.

From there Oluwaseyi attended St. Joan of Arc Catholic Secondary school where he was valedictorian of his graduating class. There he broke out as a soccer star.

A three-time MVP of the soccer team, he led his team to a provincial High School Championship as a senior, and along with St. John’s teammate Luka Gavran won the Golden Boot award at the 2017 Super Cup in Northern Ireland. Oluwaseyi separated himself amongst his teammates and demonstrated great scoring prowess on the international stage.

Oluwaseyi’s successes on the field were not only a result of the work he put in when no one was watching, but also the result of being pushed by two significant figures in his life, his father and also his coach Ron Davidson

“My dad is my critic and biggest supporter.  If I feel like I had a good game, but he said I had a bad game, then the game doesn’t mean anything to me,” Oluwaseyi said. Coach Davidson gave Tani every opportunity that he could have ever wanted since he was 14.  “My development ever since I started playing with him has just skyrocketed.”

Like many other athletes, Oluwaseyi’s favorite athlete growing up and to this day is LeBron James. He is inspired by James’ story and how he came from very little to become one of the most influential athletes in the world.

Oluwaseyi’s favorite soccer team is Arsenal and he takes a lot of his game today from one of Arsenal’s great players, Thierry Henry.

The decision for Oluwaseyi to come to St. John’s was pretty easy. He saw an opportunity to play for this program in New York City and he took it.  St. John’s let him know that they wanted him on the Red Storm. Coach Masur and his staff reached out to him whenever possible to see how he was doing and how his family was doing.

Oluwaseyi finished his freshman year with four goals and a Big East All-Freshman team selection. While impressive for most, Oluwaseyi has high standards for his play.

“I definitely could’ve done better, I worked hard.” he said.

The now sophomore has definitely improved on a good freshman year and now is one of the most dangerous presences on the field in the Big East.  Oluwaseyi credits having a strong season to coming back from the offseason healthy and with his confidence back.

Skage Simonen along with Oluwaseyi have come to form a potent scoring attack for the Red Storm.  Both came out in their freshman years and played well but have taken that step forward as sophomores to become more imposing on the field.

“He’s the best player I’ve ever played with [Skage].  Just seeing that talent I’m just trying to feed off of him,”  Oluwaseyi said.

With eight games left in the regular season ,Oluwaseyi has improved significantly on his play from a year ago but the goal isn’t personal statistics.  For him and the Red Storm, it’s all about winning the Big East.