Best In The Nation 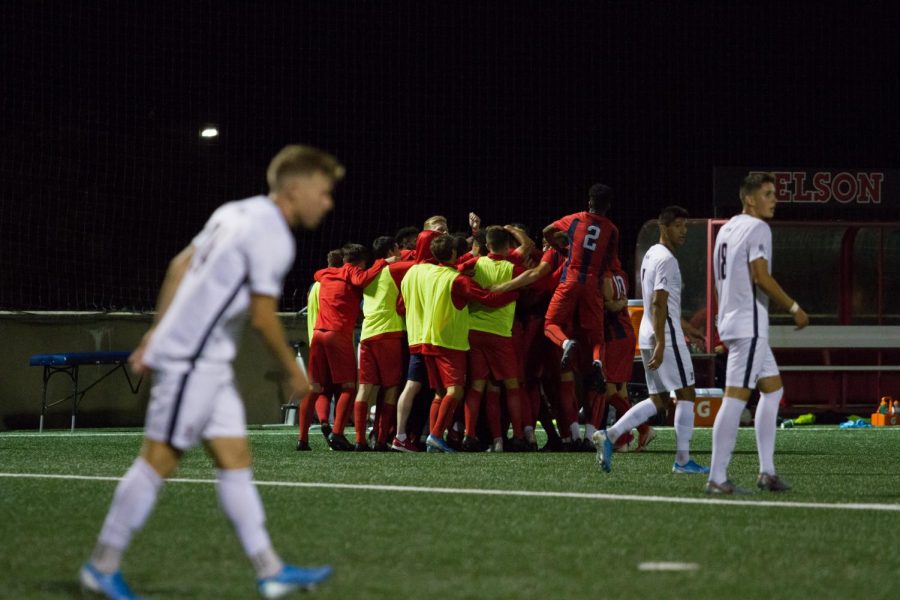 Ahead of their Wednesday night showdown with rival Georgetown University at Belson Stadium, the St. John’s Men’s Soccer team was ranked as the best team in the nation according to the NCAA’s RPI rankings on Monday afternoon. On Tuesday, it was later announced that they sit in the number four spot in the United Soccer Coaches poll. While the Red Storm sit at the top of the nation in RPI, the Georgetown Hoyas are not far behind as they were ranked second, adding more drama to the showdown in Queens on Wednesday.

Although the Red Storm were confident that they would be ranked towards the top, the news still came as a surprise for some of the players as it broke around noon on Monday.

“I was actually still in my bed and got the message from my teammates,” junior goalkeeper Jan Hoffelner said before practice on Tuesday. “I stood up and went to all of my apartment-mates and we just celebrated it together.”

With the no.1 ranking comes a lot of pressure, especially when you’re playing the second ranked team in the coming days. Nonetheless, the Red Storm don’t feel the pressure heading into Wednesday, as they have been in the national spotlight all season long.

“The whole season we’ve been kinda ranked high,” sophomore forward Tani Oluwaseyi said. “Just another day, another game for us.”

This season, the Red Storm have been on a tear as they boast a 12-1 record and are 5-0 in conference play. Their only loss of the season came against reigning national champion University of Maryland on the road. Although they fell to the Terrapins, the game was scoreless throughout 107 minutes of play, a testament to the Red Storm’s talent.

The Red Storm’s meteoric rise to success came almost unexpectedly as they were ranked seventh in the Big East Preseason poll and were not ranked nationally as well.

“We had a good bunch of guys coming in from last year, so we had a feeling we could do something special,” Oluwaseyi said. “I’d be lying to you if I said I thought it was going to be this special.”

Once the Red Storm began regular season play however, heads were turned and the nation took notice as they did not allow a goal in their first three games, knocking off strong programs like North Carolina State University and Appalachian State University. The biggest test for the Red Storm came in their first Big East game of the season as No.19 Xavier University came to Queens for a Friday night matchup in September. The Red Storm stunned the Musketeers with a 3-1, giving them confidence moving forward. After Xavier the Red Storm then went on to lose on the road at Maryland. However, since then they have not lost a game, riding a five game win streak into Wednesday night.

While the Red Storm have gone on this run as of late, students at St. John’s have taken notice. This season, the Red Storm have drawn large crowds as the fans have helped to boost the team’s confidence at home. In fact, the Red Storm have averaged 1048 fans in attendance in six home games so far this season. This is a significant increase compared to last season where they only averaged 765 fans per game.

“It’s one versus two, games like this don’t happen often,” Oluwasseyi said. “The past two home games have just been amazing with the fans here and we thrive off their energy. It’d just be amazing to see everyone packed again.”

With the Big East Tournament and the possible chance of making it to the NCAA Tournament looming on the horizon, the Red Storm are focused on the task at hand. Throughout the season they have learned to take it day-by-day and as a result have gone on not a run, but a sprint that has brought them to the top of the nation.

“I think right now the focus is just on Georgetown,” Hoffelner said. “We don’t worry about what could happen, what is going to happen; we are just gonna focus on the very next test.”