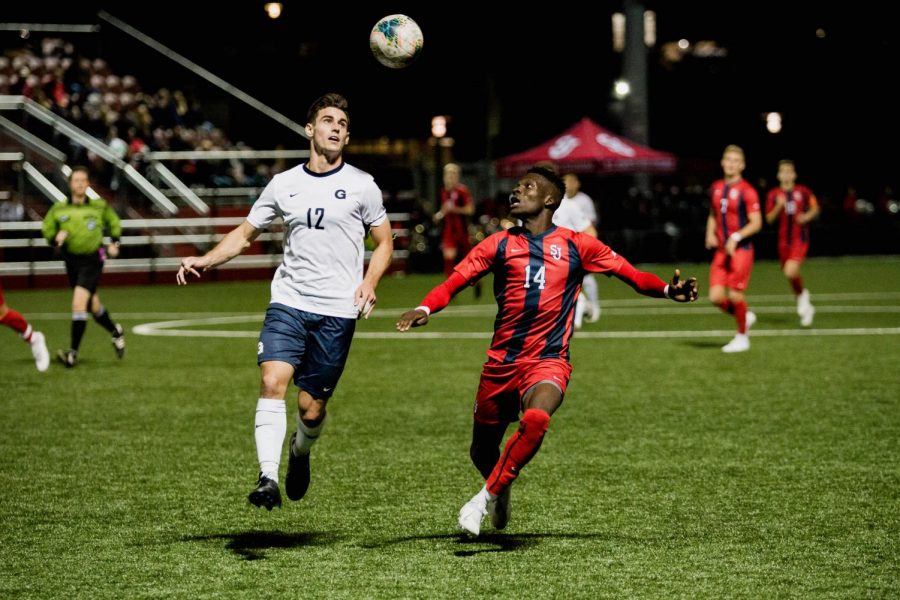 Tani Oluwaseyi fights for a ball during the Red Storm's 3-0 loss to Georgetown Wednesday night.

Playing the blame game can be foolhardy, but St. John’s goalkeeper Luka Gavran had seen enough.

The officials emerged from their huddle to confirm the third Georgetown goal of the night, a corner kick that bounced off a clutter of heads and took an unlucky bounce into the net. Gavran saw the signal and took his frustrations out on the instigator. He booted the ball high into the sky, accentuating the spirit that had befallen St. John’s players and fans.

Word came on Monday that the Johnnies were the top team in the country by RPI calculations. NCAA coaches voted them fourth-best on Tuesday, the school’s highest ranking since September 2009.

Palpable excitement poured in with the sold-out crowd on Wednesday night. Georgetown was second in the RPI, seventh in the coaches poll, and next on the schedule. Claim to the top spot in the Big East was on the line in the first top-10 showdown on St. John’s home turf since 2008, maybe not-so-coincidentally the same year as their last College Cup appearance.

It was billed as a showcase of swarming defense. Separated by percentage points at the top of the national GAA leaderboards (Hoyas third and Red Storm fourth), the back lines were stingy at the onset.

Georgetown was stopped on two corner kicks in the first five minutes, the second of which nullified by an offsides call. St. John’s forward Matt Forster was chased down on a near breakaway chance just moments later.

That was as close at the home team came in the first half. Georgetown kept them back on their heels with a flurry of charges, most of them failed. First came a joint effort from defender Jared Juleau and starting goalkeeper Jan Hoffelner, working together to stop a Dylan Nealis try in the 15th minute. Another offside call kept a successful Hoya score from counting in the 16th.

Hoffelner held steady under duress, until the defense started to cave. Stretched out to his limits, a direct free kick grazed off the junior’s fingertips and into the back of the net in the 22nd minute. Before the packed crowd at Belson could process the team’s first deficit this month, Nealis snuck by a defender. Hoffelner contorted his four limbs in all different directions, desperate to force the try wayward. It scooted past him for the second Georgetown goal in a minute.

Any attempt at clawing back was thwarted by a Hoya defense that can only be described as Johnnie-like. Parallels between the two rivals were clear, both running a successful goalkeeper tandem, staunch back lines, experienced and successful head coaches. But on Wednesday night, Georgetown looked as much the equal of the St. John’s defense as any team in the country.

Forster, Matt Chandler, and Tani Oluwaseyi all had looks on Georgetown keeper Tomas Romero. Whenever there was an inch of turf between a Johnnie and the net, a boot promptly stepped between them. Even when executed perfectly, like the short-sided header try from Brandon Duarte in the 81st minute, Romero was positioned to catch the ball in his chest. St. John’s managed just seven shots all game, four of them on goal.

If the Red Storm have their way, all this could do is set up the story for redemption in the Big East tournament next month. For now, focus returns to the rest of the schedule.