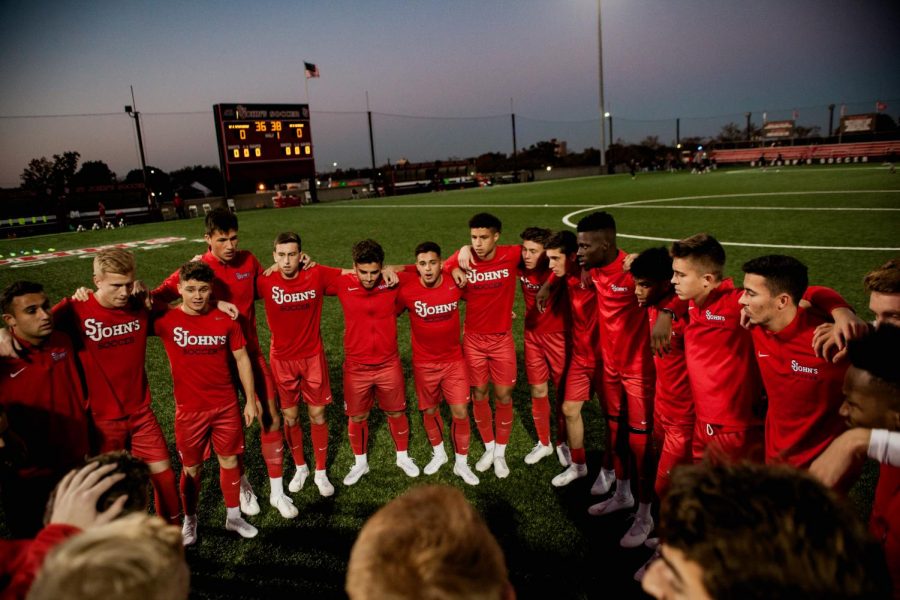 With their 4-2 win over DePaul on Saturday night, St. John’s Men’s Soccer will have a first round bye in the Big East Tournament.

St. John’s soccer wrapped up the home portion of a banner regular season with the first of what could be a slew of postseason prizes: well-earned time off.

The eighth-ranked Red Storm (13-2-1, 6-1-1 Big East) clinched the two-seed in a 4-2 win over DePaul to earn a first-round bye in next week’s Big East tournament. Providence will play a to-be-determined six-seed on Saturday to determine which team will visit Belson Stadium for the semifinal match next Wednesday.

Only Georgetown stood between the Johnnies and the top spot. A loss to the Hoyas in October dashed hopes of that claim, but it’ll prove to be only consolation for the higher stakes to come. Both teams rank in the top-ten of the United Soccer Coaches poll and occupy two of the top-three spots in the RPI. The true test will come in a couple weeks, in the NCAA Tournament.

In the meantime, St. John’s honored the seniors on Saturday that led them out from the doldrums of the conference. Among the honored was midfielder Brandon Duarte, who netted his second goal of the season early in the second half.

Most of the action happened in the Johnnies’ attacking third.They outshot the Blue Demons 22-5, but couldn’t break the stalemate for much of the first half.

Tani Oluwaseyi struck in the 36th minute. Skage Simonsen floated one up for the sophomore, who gathered it with two DePaul defenders guarding him near the net. Almost effortlessly, he found a crease and rocketed one over the keeper with his left foot. His conference-leading tenth goal of the year makes him the first Johnnie to crack the double digit mark since 2003.

That’s all the Red Storm could manage in the first half, but the back line held steady. Goalkeeper Jan Hoffelner saved the only chance in goal. He handed a 1-0 lead to Luka Gavran for the second half.

Duarte started a barrage with his score in the 47th minute. Jared Juleau placed a perfect corner kick that landed square on the head of the cutting midfielder. It was the first of 15 St. John’s shots in the half.

DePaul trimmed the lead with a Jake Fuderer goal in the 53rd minute, but the Johnnies possession dominance meant they were not going to let this one slip away. Einar Lye landed a penalty kick just two minutes later for his fifth score of the year. Drew Rosen scored for the first time in his Red Storm career off an Oluwaseyi deflection that nearly knocked the keeper on his heels. Even with another DePaul score off an unlucky bounce in the 79th minute, there was little doubt in the outcome for most of the second half.

St. John’s closes out the regular season in Providence on Wednesday. With a win and a Georgetown loss to Creighton, they could share the Big East regular season title. Gratifying as that might be, there are loftier claims on the near horizon.