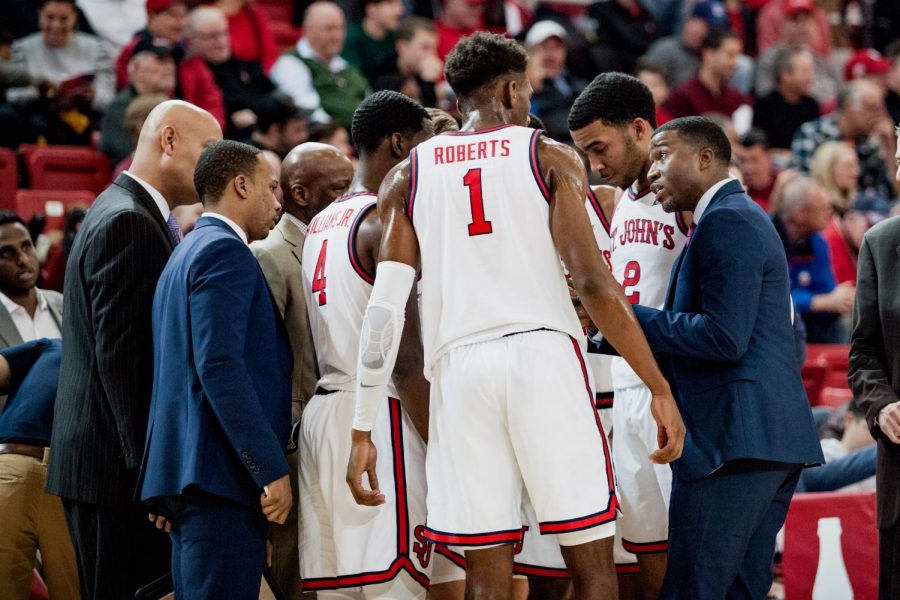 “We came in this game,” Head Coach Mike Anderson said, “with the concept of trying to get better from the last one.”

The Johnnies started off strong with the help of Heron’s hot hand, but went cold midway through the first half.

Heron put the first nine points on the board for St. John’s. He went three for three from behind the three-point line. Roberts led the team in defensive rebounds with four in just the first five minutes of the game. With about 14 minutes left in the first half, the Johnnies started to slow down.

The Blue Devils tied up the game with six minutes left in the first half at a score of 24. St. John’s scored the next nine points, securing the lead yet again. The score, however, remained close for the rest of the first half.

At halftime, St. John’s had 39 points, holding only a six-point lead over the Blue Devils. Heron carried the team with 19 points, and Figueroa with eight points.

“Just stay with it,” Anderson said in the locker room at halftime, according to Heron.

St. John’s came out strong in the second half. They put up 15 points in four minutes with the help from Heron, Figueroa, and Champagnie. This brought the Johnnies to a secured lead in their path to a win.

In the first seven minutes of the second half, the St. John’s defense allowed Central Connecticut to put up only seven points. Champagnie had two steals, David Caraher had a turnover, and Marcellus Earlington had a steal. These held strong along with many defensive rebounds by Damien Sears, Greg Williams Jr., Champagnie, and Figueroa.

Thomas O’Connell and Justin Cole got time on the court towards the end of the second half. Both players had a turnover, and O’Connell had a steal.

Figueroa and Heron had a combined 47 points, carrying the Johnnies to a win, 87-57. Sears lead the team in rebounds with a total of 11, and Figueroa led with assists with six. Heron reached his St. John’s career high in points tonight with 30 points.

“At the end of the day we found our way to win,” Anderson said. “This was a team win.”

The Johnnies will be back in action Tuesday, Nov. 12, at Carnesecca Arena where they will take on the University of New Hampshire Wildcats.