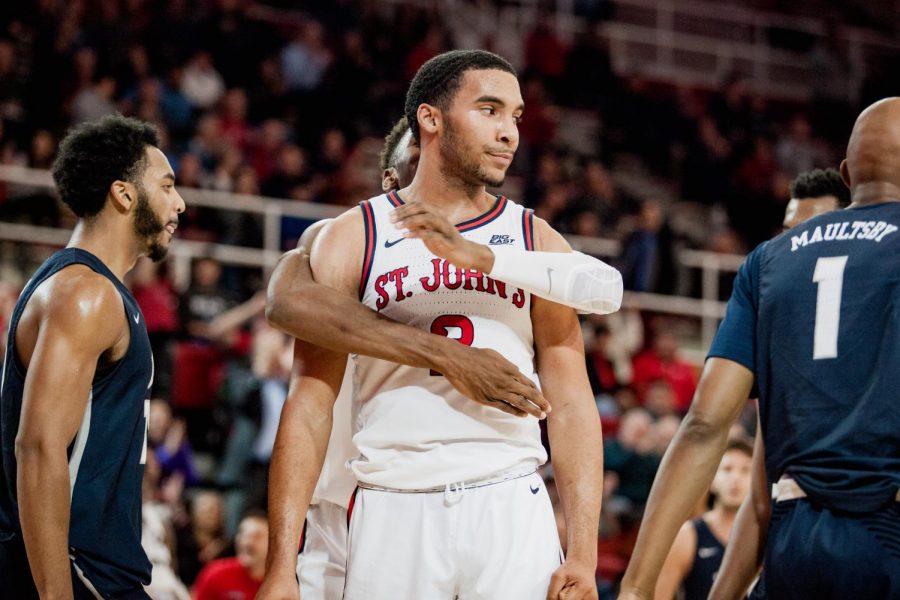 Julian Champagne celebrates after scoring a late basket in the Red Storm's win on Tuesday night against the University of New Hampshire.

St. John’s held a tight lead throughout the second half. The final score was St. John’s 74, New Hampshire 61.

“We’re not the type of team to just show up and win,” Head Coach Mike Anderson said post-game. “We have to be blue collar, we have to do the right thing defensively and offensively.”

Figueroa led St. John’s with 25 points, tying his career-high in points. Champagnie led with nine rebounds, three offensive and six defensive. Heron and Rutherford tied and led the team with five assists. Roberts reached his new career high with more than ten points. He ended the game with twelve points.

“This is where you learn,” Coach Anderson said. “We are only three games into the season. Every game is going to be a different game.”

Champagnie put up the first two points for the Johnnies. The St. John’s offense struggled to find the net, going nearly five minutes without scoring. This led the Red Storm to trail the Wildcats, 18-8, with 12:12 left in the first half.

David Caraher put up three for the Johnnies to break their cold front on offense. Roberts had a strong first half with four rebounds and eight points.

“Whether you are up or down, you just have to stay in the moment,” Coach Anderson said.

At halftime, St. John’s led the game with a score of 36-34. Marcellus Earlington tipped two points in to break the tie just before the buzzer. Figueroa led the Johnnies with twelve points. He went three for five from behind the three-point line.

After good performances against Mercer and Central Connecticut State, Heron struggled to find the basket until the second half. He put up his first two points two minutes into the second half, shortly followed by one point from the free-throw line to complete the ‘and one’.

“We kept playing the way we play,” Figueroa said, “we knew they were going to get fatigued after a while, and that’s what happened.”

St. John’s returns to Carnesecca Arena Saturday, Nov. 16, when they take on the University of Vermont at 4 p.m..