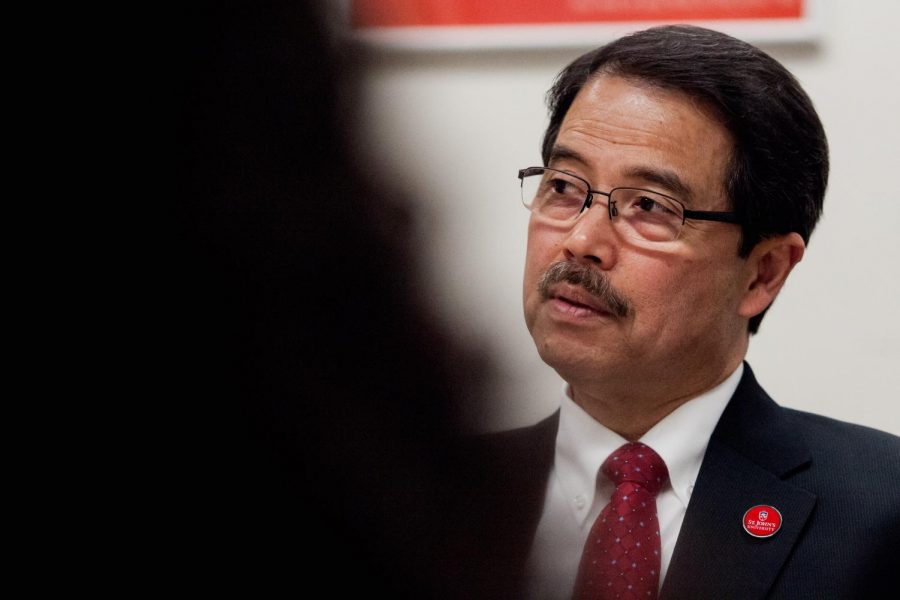 St. John’s President Conrado “Bobby” Gempesaw did not directly answer whether or not he was in favor of student-athletes being compensated for their name, image or likeness. However, he did aknowledge that he understands the attraction to the idea of student-athletes capitalizing on being included in a video game.

“A rising college athlete could have his or her name, image or likeness in [a video game],” Gempesaw said in a recent interview with the Torch. “That’s an opportunity.”

“Right now the three board of directors of the three [NCAA] divisions are working to develop policies,” Gempesaw said when discussing the NCAA’s plan of action in addressing the new student-athlete compensation legislation. “The goal is that everyone will be ready by January of 2021.”

When it comes to the NCAA’s years-long battle with how to compensate student-athletes, President Gempesaw is in a unique position. Over this past summer, Gempesaw was named as the Big East’s representative on the NCAA Division I Presidential Forum and the Presidential Forum Steering Committee, which both act as counsel for the NCAA on important issues.

In late October, Gempesaw and his fellow committee members met in Atlanta, the host city for the 2020 NCAA Basketball Tournament Final Four, for a series of meetings. In a meeting on Oct. 29, the NCAA’s Board of Governors met to discuss the NCAA Board of Governors and State Legislation Working Group’s recommendations on the topic of student-athlete compensation. President Gempesaw’s name was not mentioned on the attendee list, however, Big East Commissioner Val Ackerman, who serves as the working group’s co-chair, was in attendance. Ackerman and her constitunts presented their report on student-athletes benefiting from the use of their name, image or likeness.

The report that was presented at the meeting, which can also be found on the NCAA’s website, addresses the legislation that had been presented in various state’s while also providing a set of principles that the NCAA should take into consideration when drafting rules and regulations. The report also provides a list of steps that the working group and divisional governance structures should take moving forward on this issue.

Last month, the Torch interviewed St. John’s Athletic Director Mike Cragg on the topic of student-athlete compensation. In the interview, Cragg was for trying to work on finding a resolution to this matter, however, Cragg stated that he had, “yet to see anybody actually come up with a practical plan.”

Cragg was also asked specifically about California SB-203, the only legislation to effectively be passed concerning student-athlete compensation. Cragg said that he was confident that the law would not have an impact on St. John’s since it is set to go into action in 2023.

“We’re not going to end up with any one state deciding the rules,” Cragg said. “It was a law that was set for 2023, a lot’s going to happen between now and then.”

“The challenge that we have is that the state legislators are all passing these laws, and there are states I’ve heard like [Florida] and like California, which is not effective until 2023,” Gempesaw said. “It could be confusing if schools are being preempted by state legislation.”

“NCAA legislation that allows for variability based on identified circumstances must first be vetted  and adopted by the membership representing college athletics in all 50 states-not by a single state or even multiple states,” the report says. “The framework proposed by the working group will facilitate national consistency while allowing for divisional differences and greater student-athlete choice within our structure.”

Another challenge that the NCAA faces is the even displacement of opportunities across the board for all divisions and sports. President Gempesaw sees this issue as just a division one issue,  however, he does see an issue when it comes to equal opportunities for sports that may not have as many opportunities compared to basketball or football.

“The guideline that they wrote in [their report] is how do you differentiate the treatment of student athletes in those popular sports, versus the sports that won’t have the [same] opportunities,” Gempesaw said. “It’s not an easy task but the good news is that the NCAA has agreed to embrace the change.”

Gempesaw also mentioned that the NCAA, “generates a significant amount of its revenue from the basketball tournament. It does not share [that revenue] with the football championships, the bowl games.”

This is a major issue for the NCAA as it could potentially cause a discrepancy within the opportunities for basketball and football student-athletes as well as student-athletes in other sports.

While the NCAA has agreed to embrace the change, a lot of work still has to be done in order to modify their model of amateurism to fit the need for student-athlete compensation. According to a release on the NCAA’s website, the working group will continue to look for ways to respond to legislation and each division has been tasked with creating new rules that will go into effect immediately but no later than the beginning of 2021.