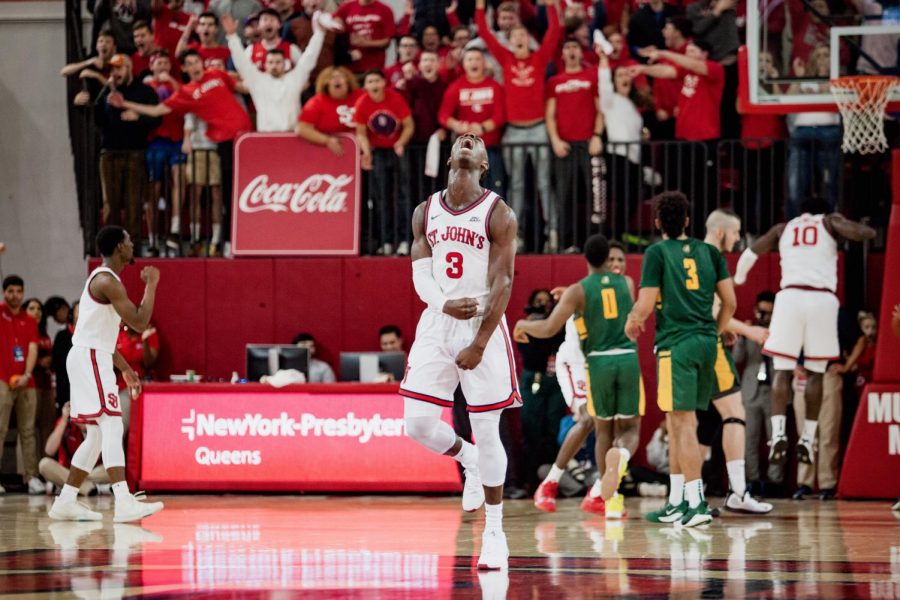 As the Red Storm fans filed into Carnasecca Arena Saturday afternoon, Rasheem Dunn suited up for the team for the first time.

After a long battle to secure a waiver from the NCAA, the good news finally came Wednesday–Dunn would be eligible to suit up for the Red Storm.

Dunn had a long road to get to this point in his athletic career. The six-foot two-inch Redshirt Junior from Brooklyn, New York hadn’t played in a basketball game since the 2017-2018 when he was a member of St. Francis Brooklyn College basketball team.

The crowd rose for cheers and a loud applause with 14 minutes left in the first half. Dunn was checking into the game for the Red Storm. The anticipation had been building up since it was official that he would become eligible for the season. Fans couldn’t contain their excitement for the announcement.

When Dunn checked in, he could have predicted the type of performance that he put together. Dunn showed expected signs of rust early on, not making his first basket until there were three minutes left in the first half.

Dunn’s most memorable moment of the first half was a midrange shot as time expired to extend the Red Storm lead to five. The 4,000 in attendance nearly screamed the roof off of Carnasecca as the ball fell through the net, and Dunn himself let out a roar that called out to the fans. He had finally arrived.

The Red Storm were unable to keep pace with the Vermont Catamounts early on in the half, falling behind by as much as ten. With 28 seconds left, Dunn was subbed in and nine seconds later connected on his only three-pointer of the game to tie the score at 68. A ten-point comeback was complete, but the Red Storm needed to hold the Catamounts off the board to force overtime.

The Catamounts’ best player, Anthony Lamb, was able to sink a two from midrange to pull ahead 70-68. When the inbound pass came to L.J. Figueroa, he was unable to keep his feet inbounds and that turnover was the dagger for the Red Storm in a hard-fought loss.

Dunn and Figueroa were the two Red Storm members to speak to the media after the loss. Dunn, while obviously upset the Red Storm were unable to pull off a comeback was happy to finally be back out on the court.

“It was a wonderful day for me,” Dunn said. “First time playing this year just having that feel, getting my groove back. Last but not least, being on the court with the team I worked hard with all year.”

Coach Anderson highlighted Dunn’s creativity and grit as being what showed the most for his first game as a Johnnie. After a year of sitting out, Anderson was impressed with his first game.

“He sat out all of last year. To play for a new coach and a new style his first game I thought he gave us everything he had.”

The Red Storm’s next contest will be Wednesday against Colombia University at 7 P.M. at Carnasecca Arena.