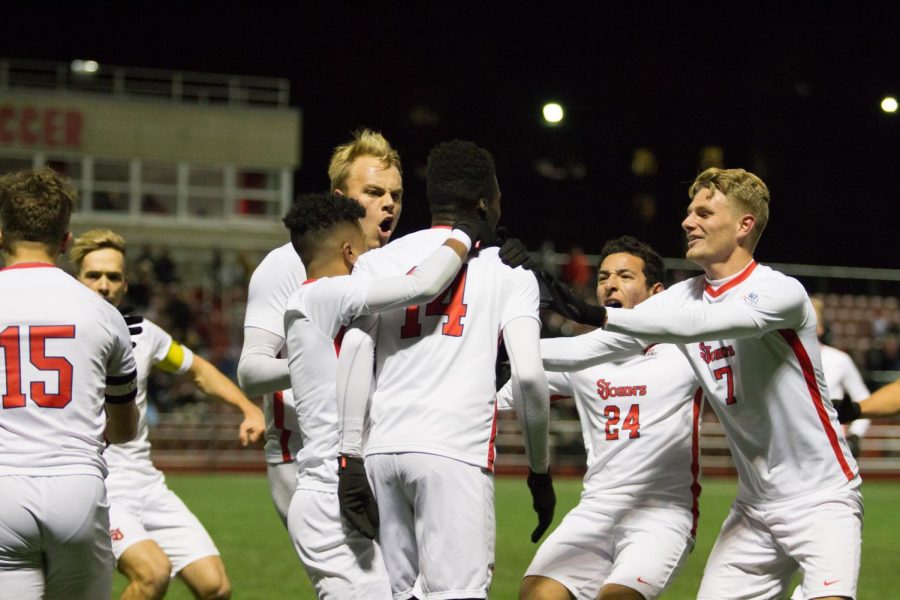 All eyes were fixated on the two television screens that hung parallel to each other in the team room of Carnesecca Arena as the St. John’s Men’s Soccer team awaited their seeding for the NCAA Tournament. Not even five minutes into the selection show, the room erupted into cheers and hugs as it was announced that they had received the No.16 seed in the tournament and would play the winner of the Thursday night matchup between the University of Rhode Island and Syracuse University, at home Sunday at 5 P.M.

“We thought we had played really hard and determined. All year round our RPI has been very high, we played a very tough schedule and it’s nice to see that we got rewarded with a seed,” a grinning St. John’s head coach Dr. Dave Masur said moments after the announcement. “But again, it’s about winning games, and it’s about playing well and we’ve got to compete on Sunday no matter who we play and make sure we’re ready to win.”

The Red Storm have won their fair share of games this season, boasting a 13-4-1 record, their highest overall win total since 2011 and the best regular season win total since 2008 when they marched their way to the national semifinals. The 2019 campaign started with a bang as the Red Storm recorded the best start in program history going 8-0 to start the season. The eight wins came against tough competition as they defeated teams like Appalachian State University and Xavier University, who was ranked No.19 in the nation at the time.

As the hot streak continued, the rest of the nation took notice as the Red Storm climbed their way up the United Soccer Coach’s Poll and RPI rankings. Heading into their home matchup against Georgetown in late October, the team was ranked No.4 in the coach’s poll and No.1 in RPI, a feat that was unexpected when the season started.

“It’s the most unexpectedly successful team we’ve ever had, which is a unique thing,” Masur said. “We’ve kind of jumped up and have done really well to go 11-1 [against non-conference teams in both regular season and preseason play] and be really good in the Big East, and so guys have stepped up, and we’ve had a lot of different contributors in the program. So it’s been really exciting for everybody to be apart of.”

“It’s been so much fun,” senior captain Matt Forester said. “Being ranked in the top 10 for the majority of the season has been crazy. It’s been so much fun to play with this group of guys, [we have] great talent and everyone works so hard for each other.”

The Red Storm have benefitted from stellar home crowds this season, which has been reflected in their 7-2 home record this season. The student section, located behind both goals, were filled for both the Xavier and Georgetown games this season, something that has not been accomplished in recent memory.

“Hopefully we have a big crowd on Sunday,” senior Nikko Petridis said. “We’ve had a couple big crowds this year and with the students coming up to support us, it’s been amazing.”

Although the Red Storm skidded to the finish line at the end of the regular season, going 1-3-1 in their last five games including a nail biting 2-1 loss to Providence University at home in the semifinals of the Big East Tournament to last Wednesday, the team showed some promise against tough competition. As they gear up to face the winner of Rhode Island and Syracuse, Masur and his team know what to expect as they have faced tough competition all season.

“We’ve played against a lot of tough teams,” Masur said. “We’re gonna be excited and ready to go.”