Women’s Basketball Off And Running 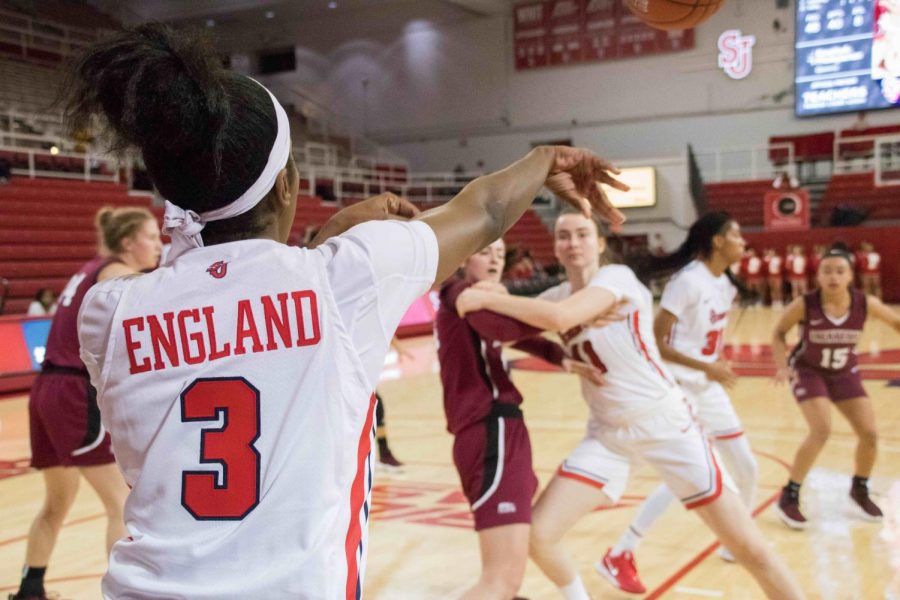 The duality of unmitigated success can be defeating. There is, of course, the satisfaction. But there might be a hint of that untenable self-doubt that wonders where things might go wrong. Damning as it may be, usually it wins out.

St. John’s women’s basketball started 2-0. They cruised to a blowout victory in their home opener on Wednesday. Then, damnably, they fell in the final minutes to James Madison on Sunday.

The schedule was forgiving to start. Their first two opponents, St. Bonaventure and Lafayette, won eight games apiece in the 2018-19 season. Those games were scheduled eight days apart, meaning the Red Storm had over a week to prepare for their first game in Carnesecca.

There was no sign of rust. They surged to a 10-2 lead and barely budged a basket. Lafayette pulled it within six with 9:06 to play in the second quarter but never came closer.

The spark came from Qadashah Hoppie. Off a lackluster performance in a season-opening win, she scored the first six Red Storm points on Wednesday. The junior guard tallied 11 on 4-for-5 shooting in the first quarter alone and finished with 22.

Lafayette did its best to neutralize a thus far potent St. John’s offense. They ran some variation of a 2-3 zone for most of the evening. Playing a smaller lineup, St. John’s turned down opportunities in the paint for a more methodical approach.

Leopards shifting to cover the ball meant open Johnnies. Sometimes it took an extra pass or two, but there was often an open teammate lingering beyond the arc. They converted 8 of their 22 shots from long range.

“I think we made enough shots to be able to hurt them in [the zone],” coach Joe Tartamella said after the 76-44 win. “At some points in the game it slowed us down, but I thought we did a great job…of moving the ball.”

Hoppie finished 5-for-7 from downtown, a figure she’d duplicate on Sunday. Tiana England made more of an impact without the ball in her hands. She snagged five rebounds in her 5-foot-7-inch frame, to go along with four of her patented assists and six steals in the home opener.

“I feel like we started off with a bunch of energy,” she said after the win. “The whole forty minutes we played with energy and that fueled our offense.”

Electrifying as it may be, athleticism can breed bouts of eccentricity. England struggled to the tune of seven turnovers in Sunday’s loss to James Madison. She shot 4-for-14 from the field, effectively neutralized when she held the ball.

The problems reached far further than one inconsistent outing from a star point guard. St. John’s couldn’t keep the Dukes down in the middle of the fourth quarter. A mini 9-2 run swung the difference from one point in the Johnnies favor to five for the home team at the 4:37 mark.

The teams traded baskets down the stretch, but by the time Hoppie drilled a three to pull the Red Storm within one with nine seconds left, it was too late. Jackie Benitez made her free throws to finalize a 76-73 James Madison victory.

The Johnnies weren’t overmatched in their first true test of the season. They scored more off turnovers and only shot marginally worse from the field than the Dukes. Where they struggled was on the boards.

James Madison out-rebounded the Red Storm by 17. For a team with no true starting forwards, size is going to be a disadvantage. Teams like the one they saw Sunday, an NIT semifinalist in 2018-19, will control the battle in the paint. With their recently prolific stroke from deep range (they shot 8-for-18 from beyond the arc on Sunday), the Johnnies will have to stay outside to hang with the best.