An Unsettling Weekend for Women’s Basketball 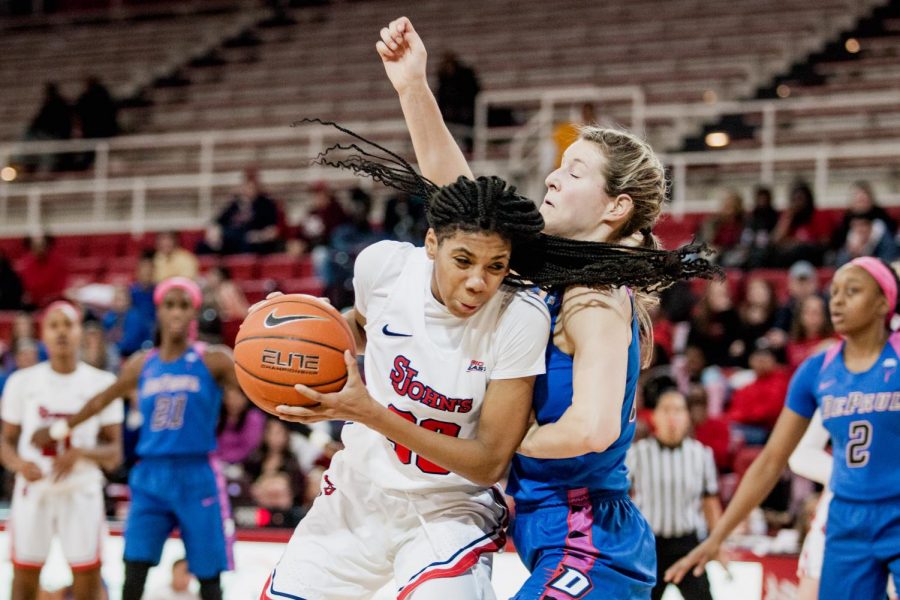 A weekend home ends in two setbacks for the St. John’s Women’s Basketball team, when they struggled in matchups against their Big East opponents DePaul and Marquette.

St. John’s strong lead began early in the second quarter. They were able to continue their offensive run, going on a 12-0 advancement.

At half, Hoppie led the team in scoring 14 points. Bailey led the team in total rebounds and registered as many as four blocks throughout the game. The Red Storm was up at half with a score of 35-28.

The beginning of the third quarter brought a strong offensive wave for the Johnnies. At some time in this quarter, the Red Storm held a 16 point lead over the Blue Demons. In the final two minutes, however, DePaul was able to put up seven points. This allowed their deficit to decrease to only nine points going into the fourth, with a score of 49-40.

The energy in Carnesecca was soaring during the fourth quarter. DePaul opened up a full-court press to keep the tension high on offense and defense.

Bailey had her fourth block of the night with about five minutes left in the game. The Red Storm only had a two-point lead when Hoppie pulled back for yet another three-point shot. It was good to carry the Johnnies up by four with just over four minutes to go.

DePaul tied the game up with about two minutes left. After Leilani Correa broke the tie with two points, the Blue Demons followed up with a three and two free throws. From there, DePaul held the lead, ending the game with a score of DePaul 71 to St. John’s 65.

“I thought we played really well for a better part of the night,” Coach Joe Tartamella said after the game. “Unfortunately, we just didn’t play well in the fourth quarter, which has been a problem a few times.”

Hoppie led the game with 27 points, reaching a career-high in scoring. Correa completed her first double-double with the Red Storm. Bailey registered a team-high 11 rebounds in the game.

For a quick turnaround, the Women’s Basketball team took the court of Carnesecca once again on Sunday afternoon, welcoming Marquette.

Freshman Emma Nolan opened up this match-up by putting nine points on the board with three pointers. During this quarter, two free throws brought Senior Alissa Alston to her 1,000th career point. Both teams held on strong offensively, ending the quarter with a score tied at 20.

During the second quarter, the Johnnies struggled defensively. Although they were putting up shots, Marquette was putting up more. Despite the difficulty, the Red Storm was able to pull back and end the half with a tie at 32.

At halftime, Nolan led the team with her nine points from the first four minutes of play. Alisha Kebbe led with five rebounds.

The third and fourth quarters for the Red Storm brought low offense from both teams. The third, especially brought the Golden Eagles to an 11-2 run over the Johnnies. In the final ten minutes of the game, Hoppie and Correa managed to cut down the team’s deficit to just six points. With a score of 50-44, this was the closest the Johnnies came to catching up.

The Marquette Golden Eagles pulled off a double-digit lead to win the game with a score of 67-57.

Bouncing back from these two setbacks at home, the Women’s Basketball team resumes play with their final two-game road stretch. They will head to Creighton on Feb. 14 for a 7 pm tip-off in Omaha, Nebraska.

“Hopefully the road will help us lock in and focus,” Coach Tartamella said. “We have been in situations like this before overtime, but this team certainly has the capability of playing against anybody.”