Anderson Sprints Her Way To Stardom 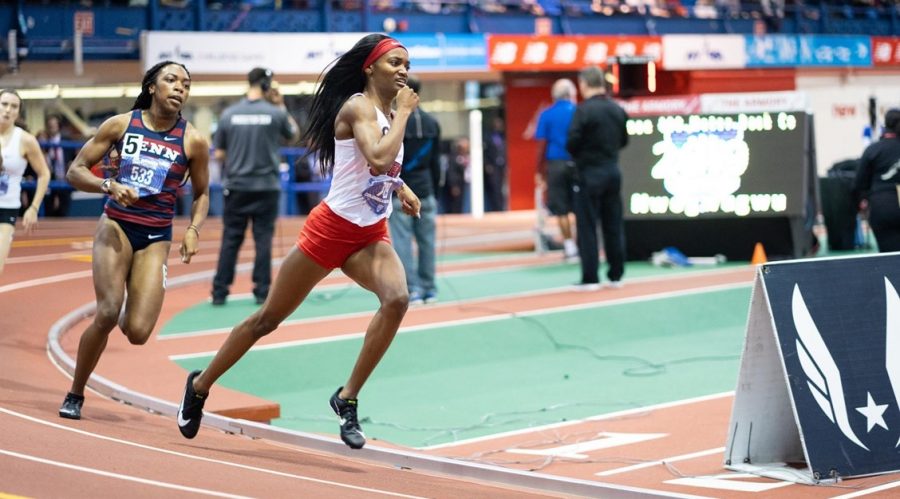 The St. John’s Track and Field team has a star on their hands in Leah Anderson who is putting her name on the map of athletes on campus.

The Torch had the opportunity to catch up with Anderson and discuss her season so far.

“I definitely had an evolution phase coming off my sophomore year, I had a lot of learning to do over the summer,” Anderson said. “The start of the year has shown how much I have grown.”

During Anderson’s sophomore season she captured gold or silver metals in six consecutive meets and won the top mark in the outdoor season Big East championships at 53.10 seconds.

She also competed in the NCAA preliminaries, finishing 42nd in the 200 meter dash and 28th in the 400 meter dash.

Andeson, a junior sprinter from Mount Vernon, NY is making noise throughout the Track and Field community. She has been awarded Big East Track athlete of the week on two separate occasions this year.

“It’s kind of my norm,” Anderson said. “I try my best and people tend to see that.”

Anderson was awarded her first Big East Track Athlete of the week with her performance at the Penn 8 Team Select event on January 24. At the event Anderson set a personal record at the time in the 60 meter dash of 7.56 seconds, good enough for first place for the day.

Anderson’s time was good enough to rank her with the best time for the event in the Big East and finishing with a top 100 time in the country. She was also able to secure a top 10 time in the Eastern College Athletic Conference.

Next up for Anderson was the Dr. Sander Columbia Challenge where her consistency was on display once again. Anderson finished in second place in the 400 meter dash with a time of 54.52 seconds, good enough for second place on the day. Her time ranks 28th in the nation and puts her back on top of the Big East leaderboard.

The Johnnies were able to secure first place in the Metropolitan Indoor Championship with a boost from Anderson. She ran again in the 60 meter dash and again secured a first place finish with a time of 7.52 seconds, breaking her personal record set only a week before.

“60 meter dash isn’t really my event,” Anderson said. “Since I run 400s which require alot of strength the 60 meter was pretty easy.”

Anderson has demonstrated consistency throughout this season early on and puts coaching as one of the top reasons for consistency.

“Great coaching, great friends, a lot of hard work,” Anderson said. “Getting up, doing my breakfast and lunch, staying consistent with the little things and the bigger things will fall into Place.”

Coach Jim Hurt is one of Anderson’s biggest supporters and for her he is one of the main reasons she is where she is today.

“Obviously letting me run for St. John’s,” Anderson said. “Keeping up on my health and helping me through a lot of traumatic experiences that I have been through and just helping Me.”

Anderson’s St. John’s career hasn’t been all positive things but this year it is all coming together for her.

“A lot of down, a lot of being sent home but definitely a huge learning experience,” Anderson said. “It keeps me disciplined to have something to work toward. An eye opener for what my goals are.”

While the team and their performance is firmly in focus for Anderson she has some goal and ideas of where she would like to be this summer.

“Olympics is a big one for me this year,” Anderson said “I have to hit certain standards in order to make the trials and actually go to the olympics.”

Anderson is also looking forward to competing in the NCAA and the Big East meets this Year.

For the fans the rest of the season Anderson expects the team to perform their best in the remaining meets.

“A lot more wins and the Big East is coming up,” Anderson said. “I’m hoping for a great performance in Boston next week. I really want us to win.”

The Red Storm have six more events left on the season. Three more before the Big East tournament on March 1st followed up by the Eastern College Athletic Conference Championships March 6th through the 8th.