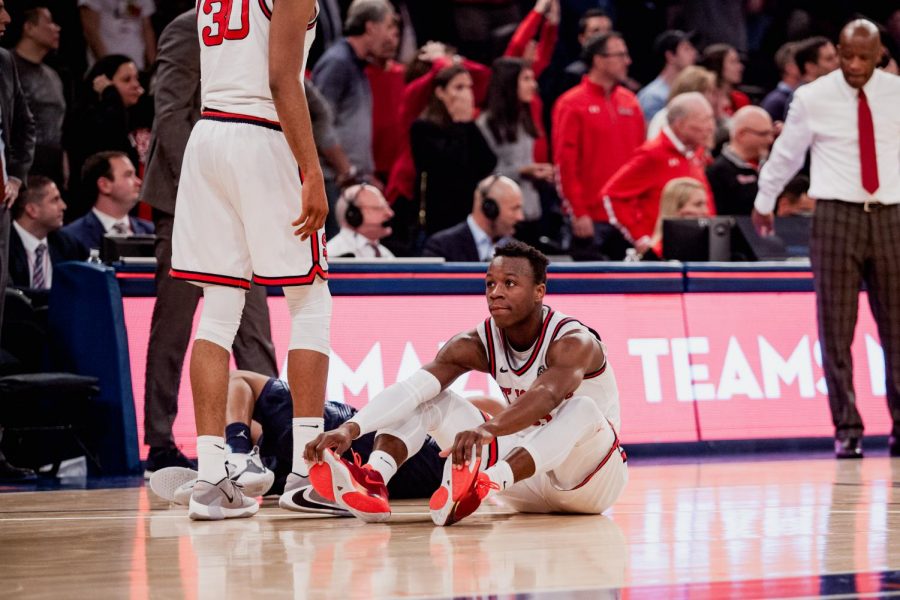 The math is easy. Move a two, carry a three, and the Johnnies might have a tournament résumé.

Late miscalculations have cost the Red Storm early in conference play. Two wins over bottom-dwelling DePaul are keeping the Johnnies afloat in a crowded Big East.

Off what looked like a signature win over ranked Arizona, St. John’s was rolling into their first conference showdown with Butler. Seven wins in a row garnered support on a few AP ballots. They received four votes in the Week 8 poll, then remained idle as the schedule prescribed over Christmas and the following week.

Whether the 10 day layoff had any substantial effect on the Johnnies is speculative, but the proof could lie simply in the first half results at Carnesecca on New Year’s Eve. Butler took a 37-16 lead into halftime and opened it as wide as 23 points early in the second half before the Red Storm woke up.

More accurately, Butler fell into a deep sleep. The Bulldogs didn’t score for nine minutes, leaving the Red Storm with no choice but to crawl back. Despite a solid-but-less-than-torrid 53% shooting display over the run, St. John’s took their first lead of the game with 6:49 remaining.

From there, it was a simple matter of who missed last. The Johnnies built their advantage as high as five with 3:08 remaining. They wouldn’t make another basket.

Christian David drilled a three-pointer to put the Bulldogs ahead by their winning margin of two with less than a minute to go. Rasheem Dunn drove to the basket with the clock near 15 seconds, and flailed in traffic to attract the attention of a referee. No foul was called, and when St. John’s fought for one last chance after a jump ball gave them possession, Dunn lost the handle on his way to the hoop.

“We got to learn how to finish,” head coach Mike Anderson said after the 60-58 loss. “We were right there against a very good, very experienced basketball team.”

When St. John’s is going right, they’re taking advantage of the athleticism that lines the roster, creating opportunities and taking chances. Following two more losses, including a blowout at Georgetown, DePaul came to Madison Square Garden on Jan. 11 as the only other team without an intraconference win.

They stalled early on, trading mostly miss for miss. DePaul built a six point lead, but Dunn entered off the bench and stopped any Blue Demon momentum.

First, he scored on back-to-back possessions to narrow the gap. Then he headed a full court press that controlled the direction of the half. St. John’s started on a 10-0 run that put them ahead for good after stretching their defense into the backcourt. They forced five turnovers in a five minute stretch, and accentuated the half on a seamless cross court connection leading to a Nick Rutherford score as time expired.

Despite officials’ best efforts (the two teams combined for 27 fouls in the second half), the game did eventually end. Dunn had the best game of his brief St. John’s career with 19 points and 8 rebounds. Julian Champagnie added 11 on 4-4 shooting in the 74-67 victory.

After coming on the short end of a tight battle with Providence on the road, the Red Storm carried a lead late against now tenth-ranked Seton Hall at MSG. Up as many as 14 early in the second half, the Pirates cut the margin down to two with 14 minutes left. The lead changed hands nine times down the stretch until the Pirates took it for good with 1:11 to go.

There was no such drama on Jan. 28 at the Garden. After splitting a road trip at Marquette and DePaul, the Johnnies came no closer to upsetting eighth-ranked Villanova than a 13-6 lead at the 14:56 mark of the first half. Ten minutes later, the Wildcats were up nine and the Red Storm never pulled it back within six in a 79-59 loss.

The crescendo came on Super Bowl Sunday. Wins in the bottom of the conference are going to be currency this late in the season, and St. John’s is going to need to horde them with four ranked opponents still on the schedule.

Anderson mixed up the lineup when Georgetown came to MSG that Sunday afternoon. Mustapha Heron scored just three in the loss to Villanova. He still played his shaf 24 minutes, but they came off the bench for Greg Williams, who was inserted into the starting lineup for the first time this season. Heron tied for the team high with 16 points.

He missed his first three shots before hitting back-to-back three pointers to put the Johnnies up in the middle of the first half. The score bounced back-and-forth for the first 12 minutes, until the Red Storm ripped off an 11-2 scoring run. They took a nine point lead into halftime, and stretched it as high as 17 in the second half.

Just as they had done the spoiling in the months prior, it was the Johnnies turn to be spoiled. The Hoyas chipped away, never pulling off a run of more than six points nor taking the lead in the first 19 minutes of the half. Still in front, Heron and Dunn missed a combined three shots in the final 60 seconds to leave the door open. Jagan Mosely dished to Omer Yertseven for the winning score with 10 seconds left. It was the Hoyas first lead since the nine minute mark in the first half.

Most recently, the Johnnies could not get the stop they needed against the high-powered offense of Creighton. They could hardly get a stop at all, with the Blue Jays shooting over 60% as a team. St. John’s faced double digit deficits in both halves, pulled it within two on both occasions, then slipped back into obscurity in the face of extended Creighton runs. Marcellus Earlington made 10 of his 17 shots for 25 points, easily a new career high, in the loss.

St. John’s sits above only the Blue Demons in the conference standings. There are eight teams above them, the middle seven separated by three games. A single basket decided losses to two ranked conference opponents.

“We’ve had some tough games,” Anderson said after the Seton Hall loss. “We haven’t been out of a game, except in the Georgetown game.”

“I like the way this team responds to some tough losses,” he added.