With Players Overseas, Women’s Soccer is Coping with COVID-19 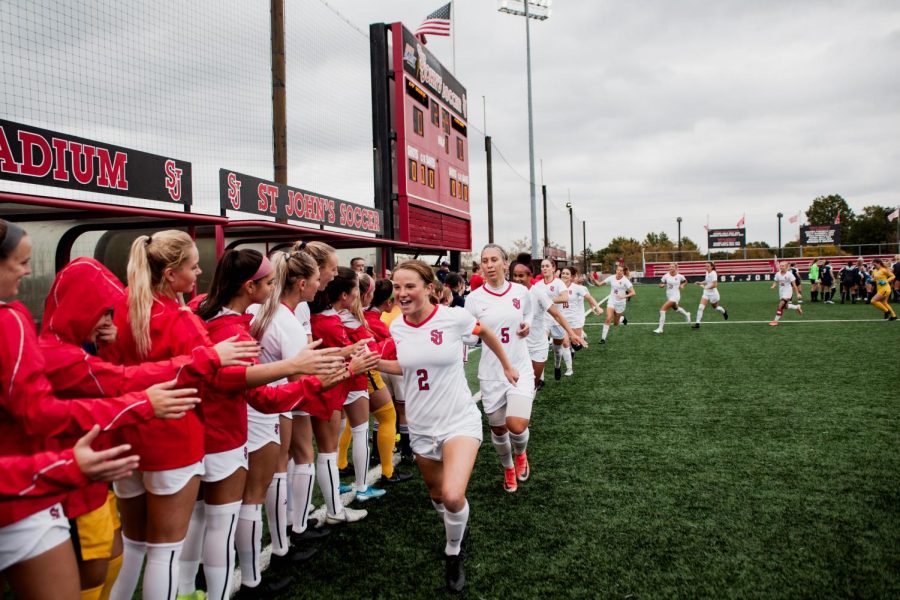 What was supposed to be the start of the Women’s Soccer team’s spring matchups turned into rushed flights home and FaceTime video calls  in order to stay in contact with the team.

The COVID-19 outbreak has forced St. John’s, in partnership with the NCAA and the Big East, to suspend all sports indefinitely. For international students, this meant finding a way home amidst the placement of travel restrictions and the unknown answer to when they’d be back on campus.

Yet, for defender Katherine Turner and forward Alex Madden, finding flights home from England was of no issue. For them, adjusting to being home on top of online classes, reaching out to coaches and staying in contact with those in the U.S. was the difficult part.

London-native Turner told the Torch in a video interview that her city has put strict restrictions on leaving the house, and at first it was not taken seriously. Yet, now she said that there are police in most places to try and enforce the lockdown more.

In terms of staying in shape for the upcoming season, Turner said that the coaches usually send out workout packets. She said that in London you can go for runs once a day.

“For me, personally it’s you do your own stuff futbol-wise,” Turner said. “But I think it’s mainly going out for runs and doing home workouts.”

She said that she has some weights to lift with at home and that her family has even started doing family pilates, which to her is something new.

Turner is coming off of an injury from the 2019 season. Even with 3,450 miles between her and the strength and conditioning coach, Turner said they are constantly in contact. She said they have a plan for when something doesn’t feel right with the healing injury, which is in addition to the progress they were making in Queens.

“I think even though we moved away,” Turner said, “we are still being checked in on. They’re doing a good job of keeping on top of us.”

Leicestershire-native Madden left Queens less than 24 hours after the NCAA announced their spring season would be canceled. She said there were plenty of available flights to change her May ticket to one for Mar. 13.

“The flights were emptier than normal,” Madden said in a video call.

Many of the restrictions in London are the same in Madden’s home city. Only key workers can go out, people can go to the grocery store and people can go out to get medications.

Madden has reached out to an old coach to possibly train with their league, but all of what they would be doing got canceled or postponed.

“If I can, my ideal would be to go back to college sooner than pre-season and workout with the strength and conditioning coach,” Madden said. “If I have to stay home, I’ll just be doing things by myself.”

Madden said she has had video calls with strength and conditioning coaches from local gyms for training sessions as well.

For both Turner and Madden, home workouts are the only thing to turn to while under lockdown in England. Regardless of time differences and distance, both players feel as though the Women’s Soccer team have adjusted well and are understanding of the difficult circumstances the world is living in.

With the loss of their spring matchups, the Women’s Soccer team lost a “great opportunity for learning and improvement,” according to head coach Ian Stone.

As a substitution for these lost games, Coach Stone told the Torch that the players may need to find club teams to work with over the summer. He said that the coaches are willing to work with each situation the players are in. He is thinking of pursuing a system in which the players set goals, and the coaches send over information in order for them to reach these goals.

This may range from wanting to work on their weaker foot, watching film or sending exercises via online resources for the players to work on.

“To me, it is just so difficult to do,” Coach Stone said. “I don’t really want to force somebody to do something they don’t want to do. Some people don’t feel safe going out.”

As Coach Stone said, some coaches in leagues are so hungry for success, they are not taking into account the health and safety of players. He said the Big East sent out emails this past week on enforcing a limitation of eight hours a week to practice with teams. But even these eight hours he finds difficult to fulfill.

“As we move forward we will get more imaginative,” Coach Stone said. “But my main priority is keeping people safe and not putting anyone at risk. Hopefully everyone stays safe and we’ll be able to get back together to keep working.”