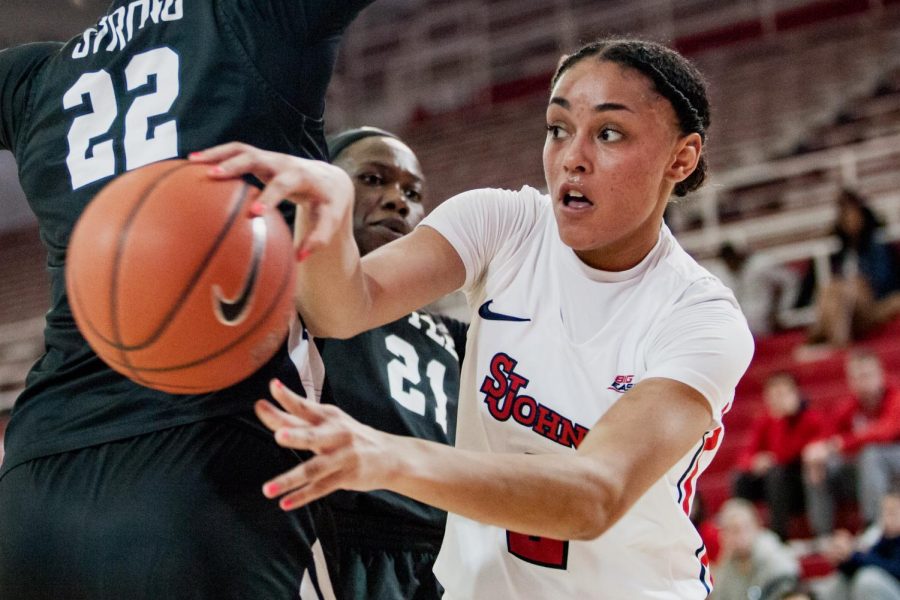 Qadashah Hoppie, Leilani Correa, LJ Figueroa and Julian Champagnie have been recognized by the Metropolitan Basketball Writers Association (MBWA) for their performance during the 2019-20 season. The MBWA normally hosts its annual Haggerty Awards Dinner to recognize players and their achievements but given this year‘s circumstances, a list was released by the association.

Read on for a closer look into the players’ standout plays from this past season.

This five-foot-seven guard led the Johnnies in scoring in the 2019-20 season, averaging 15.4 points per game, ranking her 10th overall in the Big East. Having also been selected to the All-Big East Second Team, Hoppie accumulated 478 points this season, increasing her career total to 1,179. On Jan. 27 against Providence, Hoppie became the 25th player in the program to reach her 1,000th career point.

Hoppie appeared in 31 games for the Red Storm this season. Of those 31, she was the highest-scoring player for the Johnnies 16 times. On Feb. 7, she gained a new career total of 27 points against DePaul. In her 31 appearances, Hoppie also reached double-figures 26 times. She is the first Johnnie in the program to reach at least 20 points 10 times in a single season since Danaejah Grant, who surpassed 20 points in 17 games during the 2015-16 season.

This six-foot freshman earned a number of accolades during her first season with the Red Storm. She was named the league’s Sixth Women of the Year, earned a unanimous selection to the All-Big East Freshman Team and placed a spot on the conference’s All-Tournament Team. During her rookie season, she also earned Big East Freshman of the Week four times.

These accolades are due to a number of stellar performances on the court from Correa. She was one of three players that reached double figures numerous times this season. Averaging 12.8 points per game, Correa reached double-figures 18 times. This number allowed her to lead the team in scoring in seven games this season.

The rookie scored 30-plus points three times this season, which led her to be just the second player to do so in program history. The Women’s Basketball Team had not seen this happen since Tawana Jackson did so in 1995. On Dec. 9 against Army, Correa logged her career-high total of points at 33. On top of her excellence on the scoreboard, Correa averaged 5.1 rebounds and 1.3 steals per game.

Correa also earned Her Hoop Stats Honorable Mention on their Fab 15 Freshmen list, which included teams across all 32 conferences in the country.

Figueroa led the Johnnies in the 2019-20 season with an average of 14.5 points per game, ranking 12th in the Big East in scoring. On Jan. 25, Figueroa recorded a career-high of 28 points. Included in those points were seven triples, and this number tied him for a St. John’s single-game record for Big East play.

This six-foot-six junior rallied double figures for a team-high 22 times this season. He also scored 15 or more points 17 times and recorded six games with 20 points or more. Figueroa registered 72 triples in his 32 appearances throughout the season.

Figueroa came out strong defensively this season. He was one of the leaders in the Big East and ranked 36th nationally with 1.94 steals a game. On Jan. 18, Figueroa recorded a career-high seven steals against Seton Hall. Over the season, he had four or more steals for six games.

In Men’s Basketball’s final game of the year, Figueroa scored 22 points in a win over Georgetown. The Red Storm closed out the game in a 23-0 run in just six and a half minutes of playing time. His role on the court helped the Johnnies reach a Big East Tournament win for the fourth straight year.

Champagnie: All-Met Rookie of the Year

Champagnie is only the 13th player in program history to earn this accolade, and the first  St. John’s player to receive it since Shamorie Ponds was recognized in 2017. This rookie averaged 9.9 points and 6.5 rebounds per game on the Big East All-Freshman team. Champagnie topped the team by registering four double-doubles over the season. He was the first freshman to do so since Moe Harkless in the 2011-12 season.

For the Johnnies’ 2019-20 season, Champagnie registered double figures 17 times over his 32 appearances. Over his last 10 appearances, Champagnie recorded an average of 13.6 points and 7.6 rebounds, finishing off the season with consecutive 20-point games. He reached a season-high total of 23 points against Butler on March 7 at Madison Square Garden.

In the Big East, Champagnie ranked within the top three in rebounding, scoring, steals and blocks.